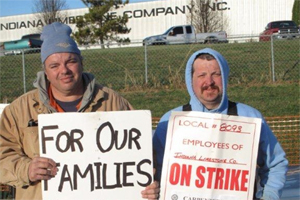 Despite an anti-union hostility that could result in a right-to-work law, Indiana is seeing an unexpected alliance bloom in a hard winter strike: The participants of Occupy Bloomington are rallying to the strikers. Photo: Dan O'Donnell.

An unexpected alliance is blooming seven weeks into a hard winter strike by 50 Millworkers at the Indiana Limestone Company: The participants of Occupy Bloomington in that nearby college town are rallying to their cause.

The millworkers, members of Local 8093 of the Carpenters Industrial Council in Oolitic, Indiana, rejected a concessionary contract and by unanimous vote went on strike November 15.

Union negotiators had been expecting the company, once family-owned but now part of a private equity firm, to move on some of its demands for work rule concessions. The company had proposed ending weekly safety meetings in a job where Millworkers operate heavy machinery, precision cutting tools, and move limestone pieces that weigh in excess of 6 tons. The company had also demanded an end to just cause standards for discipline and radical changes in attendance policies.

Instead the company upped the ante: Not only did the concessions remain, but management now wanted to cancel basic seniority rights. Local 8093 members decided to make a stand and hit the picket line, supported by 18 members of the Journeymen Stonecutters and Machinists who perform the skilled task of fabricating the end product at the mill. The Stonecutters negotiate separately but felt their bargaining position was bound up in solidarity with the Millwrights.

The strike has dragged on into January as workers weathered the holiday season without paychecks.
The trappings of the strike are familiar, with picket lines thrown up at the two main plant entrances, the scene of some physical confrontations and loud voices.

Local media played down the strike or presented the strikers as overpaid ingrates who were disrupting business and backing up traffic with their picket line.

Nearby unions gave what support they could in an area where union density has been particularly hard hit by the departure of jobs from companies like RCA/Thompson, Otis Elevator, and General Electric.

Indiana is drenched in anti-unionism: A new Republican majority was elected to the Statehouse in 2010 and a “right-to-work” law is likely to pass the legislature in January (unless Democrats repeat their 2011 tactic and leave the state). Many local papers and a portion of public opinion reflect local hostility to organized labor in a region where some people blame unions for job loss.

So it came as a surprise to see the wholehearted support the strikers have garnered from the community, in particular from the small but vocal Occupy movement in Bloomington, about 20 miles north.
Both sides have found common ground as the 99%, and both have identified a common enemy in the local face of the 1%—Resilience Capital Partners, which owns Indiana Limestone.

Resilience is the new player in Indiana’s limestone industry. Like Mitt Romney’s Bain Capital, Resilience specializes in “flipping” mid-range “stressed” companies like Indiana Limestone. The private equity firm buys them up, strips them down, lowers their labor costs, and sells them to investors.

It’s the same process that has occurred throughout the country for the past 30 years, turning family-owned businesses into “lean and mean” concerns, in the process destroying good union jobs and shrinking the tax base in communities that are struggling to survive.

While company officials make the usual statements about being fair-minded corporate citizens, the fact is that there had been only one other brief strike in Indiana Limestone’s long history, while in two years Resilience had made it clear it was only about lowering costs in order to resell.

As it became obvious that the strike was going to drag on through Christmas and that things were getting tight for the strikers and their families, several occupiers who had stood on the picket line decided to organize a benefit to buy toys for the workers’ kids.

Many of the occupiers were local people who knew too many friends who couldn’t find decent work and knew too many families whose members used to work good union jobs and were now struggling. Some felt frustrated by some of the “talk” of the Occupy movement, and wanted to engage in action.

Along with the Auto Workers and the Steelworkers, they rallied at the courthouse to demand justice for Danny Stephens, a worker injured when a scab’s vehicle hit him on the picket line.

Later that night, up the road at a local pizza place, the South Central Indiana branch of Jobs with Justice presented its annual Scrooge of the Year award to the Resilience CEO. JWJ had earlier coordinated an action in Cleveland outside Resilience’s corporate headquarters.

Strikers and their families mixed with Occupy folks, danced, talked. The event raised more than $2,000 in cash and presents.

“Having folks support us, on the line and elsewhere, has kept us fighting,” said Ronnie Watson. “We don’t like taking help, but we sure do appreciate it.”

The event also galvanized the alliance. The following week, the union and Occupiers escalated their actions against Resilience, with tents pitched at the plant entrance and rising militancy on the picket line and elsewhere. Members of Local 8093 are increasingly blocking plant entrances, while Occupiers have engaged in corporate campaigning, bringing public pressure on companies crossing the picket line and on company executives.

Aside from the heightened sense of community support, strengthening strikers’ resolve, something else was happening. On the picket line, over pizza, on the internet, limestone workers were interchanging with Occupiers, an eclectic mix of students, activists, and just plain fed-up folks who were tired of corporate power.

While many in the Occupy camp have suggested teach-ins on labor issues, the best education anyone is getting right now is on the line and in the car ride down there.

For occupiers, support for the strikers has been a lesson in unions, labor laws, and the long, slow decline of the Indiana working class.

“These are good working people, as 99% as it gets, getting hurt by corporate power,” said Charis Heisey, an occupier. “We need to all get on the same side before it’s too late.”

As the fight at the Indiana statehouse over right-to-work heats up, neither the union members nor the occupiers are fully able to define the 99%. They may not always agree; indeed, they may not always speak the same language. But both know the 1% when they see it.

Joseph Varga is assistant professor of labor studies at Indiana University. A long-time labor activist and former Teamster, Joe is currently an organizer in the all-volunteer chapter of South Central Indiana Jobs with Justice.

Related
Poultry Workers and Allies Organize in the Wake of Anti-Immigrant Raids »
Janus for the Rails and Air? »
Swept Up in France's Yellow Vest Protests »
Why Missouri 'Right to Work' Went Down in Flames »
Viewpoint: Unions Aren’t Exclusive Clubs—We Fight for All Workers »