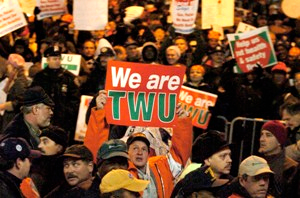 Both Republican and Democratic governors have bludgeoned public workers into massive cuts. Maybe, while we’re under such a ferocious attack, this is the time for unions to look past the right to bargain and assert the right to strike. Photo: TWU.

Conservative politicians and media are aggressively challenging the right of public employee unions to bargain collectively. Both Republican and Democratic governors have pushed through bills that limit what unions can bargain over and have bludgeoned public workers into massive cuts.

Maybe, while we’re under such a ferocious attack, this is the time for unions to look past the right to bargain and assert the right to strike. As we approach the expiration of our contract January 15, this issue is important to Transport Workers Union Local 100.

Since 1966 TWU bus and subway workers in New York City have struck three times. Each strike was illegal—violating the ban on strikes in the state's public sector bargaining laws—and cost the union and its members millions in fines.

The most recent strike, in December 2005, lasted two-and-a-half days. The union was fined $2.5 million, each striker was fined a day’s pay on top of the pay lost during the strike, the union lost dues checkoff, and the local’s president, Roger Toussaint, was sentenced to 10 days in jail for violating a court injunction.

Local 100 filed a complaint in 2009 with the International Labor Organization (the UN agency responsible for international labor standards) and the ILO has just ruled that the anti-strike Taylor Law violates international law.

The ILO found that, by prohibiting public workers’ strikes, the Taylor Law violates the fundamental right to free association. While the ILO recognizes exceptions to this right for workers performing “essential services,” it stated clearly clear that transport workers should not be included under any essential services law.

The ruling called for members’ fines to be reimbursed and for the union to be compensated for losses suffered while dues checkoff was suspended. (Checkoff was restored after 19 months, once Toussaint put in writing that the local does not assert the right to strike and has no intention of striking in the future.)

The ILO called on the U.S. to bring the various state laws restricting public workers’ right to belong to unions, bargain collectively, or strike into line with international conventions recognizing these rights.

The United Electrical Workers won a similar ILO ruling in 2007 against North Carolina’s prohibition of bargaining with public workers. The ILO can’t enforce its rulings, though, and North Carolina’s policy hasn’t changed.

This ruling is a stunning rebuke from the international community and poses a challenge for U.S. unions: Will we fight for public workers’ right to strike?

Many public union leaders would prefer not to deal with the issue. Some have always relied on a close relationship with elected officials to settle contracts. But, with Democrats and Republicans alike imposing austerity, union leaders are being turned away by the “friends of labor” they put into office.

Other leaders count on making a strong case for their contract demands in arbitration. While arbitration is better than being forced to accept management’s last offer, union officials often limit their demands to what they think an arbitrator will approve. And arbitrators will often bind one union to a deal made by another union that was unwilling or unable to fight.

Even the legendary Mike Quill, leader of the TWU during its 1966 strike, chose to emphasize collective bargaining as a safeguard against strikes, in a televised debate with former Representative Fred Hartley (yes, father of the Taft-Hartley law). For his part, Hartley stated that public employees should not have the right to strike against “the public.”

WHO IS THE PUBLIC?

This ritual invocation of “the public” hides a great deal. It obscures the fact that different economic classes exist under that label, with different interests.

For example, polls taken during Local 100’s strike in 2005 showed that a majority of New Yorkers supported the strike. Support was especially strong in working-class and poor neighborhoods—precisely the people the Hartleys of the world claim they are protecting from the effects of a strike.

Opponents of public worker unions pit the people who use the public service against workers by arguing that wage increases must be paid for by tax hikes, service cuts or, in our case, a fare hike. But that argument obscures more than it reveals, too.

Local 100 has shown many ways a decent contract can be paid for without having to raise fares. We’ve fought for a saner tax structure, one where those who make more than $1 million per year are taxed more heavily to keep senior centers open, school aides employed, and buses and subways running.

We’ve pointed to the enormous sums spent to contract out work that can be done more cheaply in-house. And we’ve challenged the financial arrangements that send 16 cents of every transit operating dollar to Wall Street bankers to pay interest.

Workers, whether public or private sector, strike when we believe we have no choice. We can march and demonstrate, lobby and vote, but there are times when we must throw all of our power, i.e., our ability to disrupt a company or a city, into a fight. Sometimes that fight is to improve our wages and benefits. Sometimes it’s to defend what we’ve won in the past.

When you stop to think about it, who is striking against the public—the politicians who cut services to the poor or elderly while refusing to appropriately tax the wealthy, or the unions who mobilize against the cuts? Who is extorting taxpayers—the corporations who threaten to pick up and leave if they don’t get millions in tax breaks or the workers who are committed to the communities they live in?

How different would the last year have been if governors intent on stripping public workers of their right to bargain had been confronted by unions exercising their lawful right to strike?

Everyone needs the right to strike, Taft-Hartley be damned. The minute the strike is surrendered as a tool for confronting the bosses, that's the minute the workers lose their power. Corporations love to negotiate because they can drag out the negotiations while workers continue on the job making profits for the corporation while their own wages stagnate or are reduced by inflation as the talks go on.

I've been on strike as a Teamster, a member of Local 804 in New York, back in 1974 when Ron Carey was president of the local. We were out for more than four months protesting against the hiring of part-time workers. During that strike, a management scab killed one of our picketers by running him over with a truck cab. Nothing ever happened to him.

It's acts like that that set the tone for how workers are dealt with by management and by authorities policing the strikes. As long as strikers are seen as wild-eyed bomb throwers the violence against strikers will continue. Look at how the Occupy movement is being confronted by authorities. All the repressive and violent tactics that are used against demonstrators in third world countries are now on display for all Americans to see.

It's past time for people in this country to stand together and assert their rights against rapacious companies and greedy politicians. To do any less dishonors the thousands of people who died so that workers, both men and women, and their families could have better lives.

As a retired Teamster, I volunteer to coach Collective Bargaining Sessions at the Los Angeles Unified School District. We spend half a day with high school seniors who are divided into Union and Management groups to negotiate a one year contract. The issues involve wages, health care, the 'career ladder' as it relates to gender discrimination, job safety and child care.
The students get incredibly animated during these sessions.
'Union' needs to be the word on the street. These kids have dim job prospects and high energy that needs to be directed somewhere positive. That somewhere is community organizing and the labor movement.
Although this was an IBT Joint Council 42 initiated project, we've come to rely on the largesse of the Diane Middleton Foundation, and scattered others. I'd like to see this become a pan-union undertaking. I think nothing is more important for the future of Labor than bringing in our youth.