Ontario Caterpillar Workers Locked Out for Refusing Half Pay 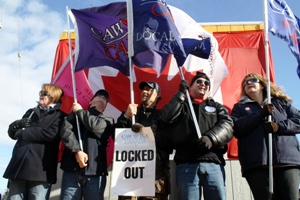 Workers at Caterpillar's locomotive plant in London, Ontario, are gaining wide support as the profitable company seeks to cut their pay in half. Photo: Canadian Auto Workers.

Update: Caterpillar announced Friday that it would shut the London, Ontario, plant and build locomotives in Indiana.

“They issued an ultimatum, I wouldn’t call it bargaining,” said Canadian Auto Workers negotiator Bob Orr. Caterpillar, the global giant in heavy equipment, has admitted to CAW Local 27 that “it’s never been able to attain this level of concessions anywhere in the world”—cutting wages and benefits by more than half.

To make its point, Cat locked out the 465 workers at its Electro-Motive Diesel locomotive factory in London, Ontario, on December 31. The Ontario labor movement rallied with a Day of Action January 21 that brought 10,000 unionists on buses from throughout the province.

The action harks back to a series of massive rallies and one-day citywide general strikes in Ontario in the mid-1990s to protest anti-labor legislation and social service cuts. London’s was the first and best, with union members picketing each other’s plants (to avoid retaliation) and with both private and public sector unions involved.

This time, the rally was on a Saturday, and Local 27 President Tim Carrie admitted that “shaming them back to the table is pretty hard to do.” The rally was addressed by a raft of supportive labor and community leaders, including London's mayor; the struggle is seen as an attempt to bring "American-style" concessions to Canada.

Picketers are maintaining a 24-hour blockade of a mostly finished locomotive that Caterpillar took out of the plant a week before the lockout. They are aided in blocking the spur line in the city of Ingersoll, east of London, by fellow CAW members from an auto assembly plant. Unit Chair Bob Scott said today that Caterpillar is seeking an injunction so it can ship the locomotive to Brazil.

Carrie predicts a long fight, based on Cat’s history. “We expected trouble from Caterpillar from the day they purchased this facility,” he said.

In the mid-1990s the company provoked lengthy strikes at its U.S. facilities in order to break the United Auto Workers’ pattern agreement in agricultural implements. Management ran the plants with scabs and workers finally returned with no settlement.

At its UAW-represented locomotive engine plant in Illinois, Cat has already achieved a starting wage of $14 an hour and is now demanding to eliminate cost-of-living increases and raise the price of insurance, as members there work under a contract extension.

The concessions Cat is demanding in London are “an insult to the membership,” Scott says. Though the company posted a record profit of $4.9 billion for 2011, with even higher profits predicted this year, it wants $18.50 off the $35-an-hour wage for over half the workforce, to eliminate cost-of-living increases, retiree benefits, and the defined-benefit pension plan, and to hike drug insurance costs. On the day profits were announced CAW picketed 12 Cat dealerships and service centers across the country.

In December the company forecast sales for fiscal 2012 would rise as much as 20 percent.

In seeking support, Scott says the union highlights the notion of wages cut in half. “If today you’re making $20, tomorrow you’re making $10,” he said. “They can relate to that.”

Caterpillar is new to the freight locomotive business, which is dominated by General Electric. Cat bought the London and Illinois plants and ones in Brazil and Mexico in 2010-2011.

The company also purchased an empty factory in Muncie, Indiana, in which to build locomotives non-union. Clearly designed to whipsaw the Canadians, the plant pays $12.50 to $14.50 an hour. But that start-up has produced just one locomotive in seven months—and observers believe even that claim may be a lie, as the company has been unable to attract a skilled workforce.

The union believes Caterpillar has a full order board of at least 300 locomotives this year, so it is difficult to see how the company plans to meet those orders between Muncie and Mexico.

Management in Ontario has told the union it won’t be hiring scabs; leaders says workers’ highly specialized welding and fabricating skills are impossible to replace easily.

Multi-ton locomotives are not normally shipped around the world, although parts are sometimes shipped as “kits” to be assembled elsewhere. “Cat is hard to read,” Orr said.

Many in London are afraid the lockout is a prelude to shuttering their plant.

At GE’s locomotive plant in Pennsylvania, across Lake Erie from the Caterpillar plant, the United Electrical Workers local sent a delegation to the January 21 rally, to support workers at its competitor.

The solidarity Local 27 showed to Occupy London last fall, when its members were camped in a downtown park, has paid off. Anthony Verberckmoes says occupiers are now camped on the lines, with a wood-burning stove and a yurt.

They’ve helped the locked-out unionists with videos, literature, and setting up internet access at the site.

The locked-out workers will get $250 per week strike pay from the CAW and, they hope, unemployment benefits. CAW President Ken Lewenza has spoken of occupying the plant, if necessary. In 1991 the union occupied a closing Caterpillar plant in Brampton, Ontario, in order to force a better severance package—a tactic the union repeated in several failing auto parts plants in recent years.

Canadian unionists are angry that the federal government has stood by while foreign-owned companies buy Canadian plants and then gut the unions, breaking commitments made under the Investment Canada Act.

In 2009 Brazil-based Vale forced a year-long strike and heavy concessions on the Steelworkers at a venerable Ontario nickel mine. And an 11-month lockout at US Steel ended last October with pensions wrecked.