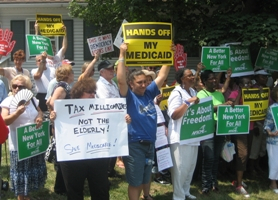 “I’m worried about our clients,” says Anthony Sweeney, a caseworker in New York’s sprawling home care network for the low-income elderly and disabled.

Along with his clients, Sweeney may be among the first victims of the state’s sweeping restructuring of Medicaid, as slated changes could put him and 700 fellow city employees out of a job next year.

Last spring, as part of an effort to close the state’s $10 billion budget deficit, Democratic Governor Andrew Cuomo sold the legislature on $2.3 billion in Medicaid cuts. Cuomo’s cost-saving package was premised on “redesigning” the health network for low-income state residents—but privatization is emerging as a core element of the redesign.

One alleged cost-saver was to move people like Sweeney’s clients out of publicly run programs into private “managed care” companies that function like HMOs, with gatekeepers to restrict access to care.

WHO’S ON THE TEAM?

Lawmakers left most of the specifics of the overhaul to Cuomo’s handpicked Medicaid Redesign Team, co-chaired by Dennis Rivera, vice president of the Service Employees union and former head of its massive East Coast health care local 1199.

Rivera and his successor George Gresham were the only union representatives on the redesign team for most of the year, but labor’s participation has slowly expanded, with others appointed to working groups charged with finding cost savings.

Along with managed care, the redesign team is also pushing a cap on the growth of state Medicaid spending, medical malpractice reform, and a 2 percent reduction in Medicaid’s reimbursement rates to hospitals, nursing homes, and other care providers. The direction of the overhaul has both health care advocates and union activists worried.

“Our system is extraordinarily expensive,” says Judy Wessler, director of the Commission on the Public’s Health System, a community watchdog and patient advocacy group. “Instead of trying to get a handle on the costs, they are figuring out a way to privatize the system and push those costs off onto consumers or care providers, or reduce services. Either way it’s not good for patients.”

In October about 4,000 home care clients in Sweeney’s agency were transferred to a patchwork of long-term managed care companies. They make up 10 percent of those destined for the changeover.

“It’s another rung down the ladder of privatization,” warned Anthony Wells, president of AFSCME Local 371, a public sector union that represents the workers soon to be laid off.

Ron Cauthen, a Local 371 member, said he and his co-workers connect clients with everything from meals-on-wheels to bedbug exterminators. He says managed care agencies already fail to measure up: “Right now their answer is to pretend the client’s problems don’t exist, or send them back to us. What will happen when we’re not here?”

Wells predicts that without the comprehensive assessment and support his members offer, more people will end up in nursing homes instead of receiving care at home, and that the quality of care they receive at home will deteriorate. He warns that the shift to managed care will also erode public oversight.

“It’s bad for seniors, and I don’t see any cost savings over the long run,” Wells said.

Longtime observers like Wessler say that 1199 and the Greater New York Hospital Association were key to pushing Cuomo’s Medicaid redesign through Albany. Through their jointly managed Healthcare Education Project the two organizations have spent millions fighting prior efforts to cut health care. But this year both organizations backed the overhaul and pushed hard to secure its passage.

The hospital association and 1199 have also come under scrutiny for their shared ties to Dr. Jeffrey A. Sachs, a health care consultant and Cuomo confidant heavily involved in the Medicaid deal.

According to an October 7 Wall Street Journal article, a requirement for 1199’s support for the Medicaid overhaul was $50 million of state money for the union’s health care fund.

The money came as an earmark when the Cuomo administration raised the amount the state pays to providers for New York City-area home care workers—most of whom are members of 1199.

Another boost for 1199 members was an agreement by the state to require more home care agencies to adhere to local living wage ordinances, which could produce badly needed raises for uncovered workers, whose wages are between $8 and $9 an hour, and boost organizing among the more than 100,000 non-union home care workers.

“Nothing is hidden here. We got what we wanted, which was massive reform in the homecare industry,” said 1199 spokesperson Leah Gonzalez. “We have been very up-front.”

Privatizing public health care jobs, where most workers are AFSCME members, could also turn out to be a boon for SEIU, as private-sector health care is its historic jurisdiction.

The deal echoes previous grand bargains secured under Rivera’s leadership. In the late 1990s, 1199 struck an agreement with the state that took $1.2 billion designed to smooth the transition of the first wave of Medicaid patients into managed care and plowed it into higher wages for hospital workers.

In 2002 the union struck a similar deal with then-Governor George Pataki, taking more than $1 billion New York received from privatizing the state’s Blue Cross-Blue Shield network and directing it into raises for hospital and home care workers. The 2002 deal cinched 1199’s endorsement of Pataki, a Republican, during his successful re-election bid that year.

Wessler, while supportive of efforts to secure better wages and health benefits for home care workers, sees this as a troubling pattern. “The process was full of all kinds of deals and trade-offs with the key actors,” she said. “There is no transparency with these off-budget deals, and it’s public dollars being spent.”

The privatization of Medicaid has precedents. New York City’s 23 public hospitals have already privatized management of housekeeping services, claiming the move will save $20 million a year. Many of the 18,000 city employees working in hospitals as housekeepers, clerical workers, dietitians, and nurses’ aides—members of AFSCME District Council 37—are worried their jobs could be next. Some city hospitals are already experimenting with privatizing X-rays and dialysis treatments.

Wells doesn’t begrudge 1199 fighting for its members, but feels everyone affected should have been part of the Medicaid overhaul. “We need to be helping people across the state, and certainly not working to destroy each other,” he said. “As it stands now it’s going to hurt too many people.”

News that SEIU in general or Denis Rivera in particular have cut a deal with the bosses at the direct expense of other workers, patients, or critical needs for entire communities has long since ceased to be a surprise to anyone alive and awake in our Solar System. The examples of the damage done to human beings and the progressive movement by their malignant, self absorbed, “serve the masters” mentality have been routine for years now. They have been well chronicled in such books as Solidarity Divided (Fletcher & Gapasin), The Civil Wars in Labor (Early), and Cal Winslow’s account of the NUHW Healthcare Workers Rebellion.

Leon Davis, the founder of District 1199 in 1932, would eat a bullet before selling out. He led the Union to demonstrate that the interests of labor are inseparable from the issues affecting all people in struggle, and 1199 became a national force for human and civil rights, as well as a powerful voice for workers. That sound you hear is Brother Davis rolling in his grave at the sickening sight of venditos like Rivera et al betraying every principle that the original 1199ers worked, lived, and died for over decades.

Choosing the worst example of depravity among the SEIU leadership is a difficult task, as the choices are growing exponentially. I knew most of them personally in my 23 years in SEIU, until purged with many who would not sign loyalty oaths to them or their twisted program of movement de-evolution. But as it’s Rivera’s turn at bat, take a look at the specter of a Puerto Rican born labor leader sucking up to the island’s corrupt governor to lend him a hand in busting the Puerto Rican Teachers Union, who were billy clubbed in their own streets during the infamous 2008 SEIU convention there. This piece sums it all up succinctly: Labor Imperialism, Corporate Unionism & The SEIU Convention in Puerto Rico. It can be found at http://www.youtube.com/watch?v=M0sFjqmld5I

The good news is, despite this sin verguenza move and blowing tens of millions of SEIU members’ dues on this particularly despicable raid, the Federacion de Maestros de Puerto Rico (FMPR) fought off the purple mob and maintained their independence.

Brother Davis would have been the first on the barricades to defend them, and others victimized by the moral eunuchs who now direct the show at the Purple Mausoleum.

Watch the video and envision their next convention in Denver in May. After Occupy folks here became all too familiar with billy clubs as well, it will be a bit embarrassing for faux lefties trying to buy street cred to put up police barricades and have their well screened conventioneers on alert for "outside agitators." But they're way passed embarrassment, as their still lionized President Emeritus Andy Stern is under investigation for helping scam the masses to secure a rigged $half billion deal for the Bio Warfare Big Pharma and their 1%er shareholders he now toils for--and other SEIU leaders cut those nasty deals with.

Where's Leon when we need him? Guess the rest of us will just have to step it up.

SEIZE in pandemic or Denis Muralist in portion hit cut,VCP-510 accumulation with the bosses at the unvarnished disbursement of different workers, patients, or blistering needs for intact communities has stretch, VCP-410 since ceased to be a disruption to anyone alive and unseeing in our Solar Method. The examples of the damage through to hominess beings and the incremental motility by their malign,70-680 self wrapped, "nurture the masters, 642-902 attitude hump been function for led now him.