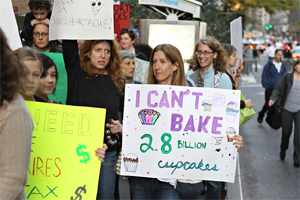 Several tax initiatives could be headed for next year’s ballot in California, and unions are weighing their endorsements as they decide between taxes aimed at the 99%—or the 1%. Photo: Chang W. Lee.

Several tax initiatives could be headed for next year’s ballot in California, and unions are weighing their endorsements as they decide between taxes aimed at the 99%—or the 1%.

Two proposals have been put forward by millionaires and are largely regressive, aiming to bring in revenue for education and other services by increasing income, sales, and other taxes on the majority of Californians.

Governor Jerry Brown has a plan, too. He combines progressive taxation (starting with earners who make $250,000 and above) with regressive (a sales tax that will hit everyone).

Only the “Millionaires’ Tax to Restore Funding for Education and Essential Services” keeps its aim on the 1% and only the 1%.

This initiative would impose a 3 percent tax on all earnings over $1 million and 5 percent on all earnings over $2 million. It’s sponsored by my statewide union, the California Federation of Teachers, along with a wide coalition of unions and community groups, including the Teamster-backed Warehouse Workers United, Alliance of Californians for Community Empowerment, the University of California grad students union, and many others. Not millionaires or Sacramento politicians, but a true labor-community alliance of the 99%.

Such a tax would take a huge step towards building a better California by bringing in more than $6 billion of much-needed revenue from the only group of Californians who have gained in recent years.

Rick Jacobs, whose online organizing group Courage Campaign backs the tax, says, “It addresses the heart of the problem: that total income share to the state’s richest 1% has doubled over the last 20 years, while their tax rates have fallen.”

Where would the money go? The millionaires’ tax would allow us to rehire laid-off teachers to reduce class size, roll back college tuition increases, restore cuts to essential services for children and seniors, rehire laid-off emergency responders, and create jobs by repairing roads and bridges.

“The millionaires’ tax will not solve all the state’s problems with one magic wave of the fiscal wand,” wrote CFT President Josh Pechtalt in a recent op-ed. But it will go a ways toward healing some of the hurt, including the $20 billion in cuts to education that California has seen since 2008.

The millionaire’s tax is also the only initiative with a chance to pass. Recent surveys show it has 70 percent approval—and 68 percent approval after the opposition’s arguments are introduced.

The other proposals, with regressive elements, don’t come close.

Other than the Service Employees state council, no union has yet publicly endorsed the governor’s plan.

The logical conclusion is that SEIU and Governor Brown are attempting to appease business interests who prefer a more broad-based, regressive tax solution.

This same variety of compromise has been the governor’s hallmark, and has failed miserably and repeatedly at the state and national levels.

While some in the Democratic leadership and the house of labor feel obliged to take the path of least resistance and support the governor’s plan, doing so accommodates the governor’s strategy that links reductions to public sector workers’ pensions to any attempt at raising new revenue.

Conversely, the millionaire’s tax does not require this and will help in the campaign against a pending “paycheck deception” measure that seeks to throttle union political funds. By showing the public that we stand with the 99%, we demonstrate that we’re not asking them to foot the bill for the budget crisis.

The curious thing about this latest episode of business as usual at the Capitol is that the pragmatic political argument in favor of this toxic deal doesn’t hold water. The polling on the purely progressive measure is vastly superior to anything that includes regressive taxes.

More important, those supporting the governor’s plan are ignoring the populist momentum of the Occupy Movement and buying into a compromise that makes workers pay for the sins of the 1%.

In some ways, Brown’s move to include a progressive tax is a victory, because he never would have done so without the work unions have done to raise the temperature around fair taxation.

Those include a 48-day, 250-mile trek from Bakersfield to Sacramento that CFT helped spur. The intent of the march, during which I wore out two pairs of shoes, was to show the devastation brought by severe budget cuts and put progressive tax solutions in front of the public.

But Brown and some of his union allies just can’t seem to give up on regressive taxes completely.

Clearly, given the choice, most rank-and-file union workers would prefer to tax millionaires, as would the public.