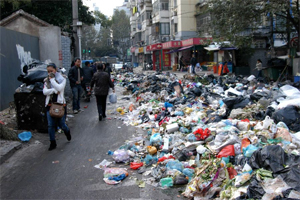 China faced its second wave of strikes in two years, as thousands of workers in industrial southern provinces—including the sanitation workers in Nanjing—took action. The strikes put heat on the country’s official union. Photo: news.163.com.

China faced its second wave of strikes in two years, as thousands of workers in industrial southern provinces—manufacturers for the world—walked out this fall. Workers making New Balance shoes, Apple and IBM keyboards, underwear, furniture, and Citizen watches struck over pay and overtime.

At two factories, workers blocked roads around the plants. Some clashed with police, resulting in dozens of injuries. At the keyboard plant, workers were angry at management’s scheduling six hours of overtime on weekdays to avoid paying double time on Saturdays. After three days the company gave in.

The strikes, like those that rocked the auto sector last year, put heat on the country’s official union, which functions as part of the government apparatus.

Workers at the watch-making subcontractor launched a 13-day strike to demand back pay for break time stretching back seven years—despite the legal requirement that such claims could go back only two years.

Refusing to include the official union in negotiations, 586 workers signed a petition giving their power of representation to a crusading labor lawyer. The collective bargaining that resolved the strike included a workers’ committee at the table, resulting in deep concessions by the employer, say university researchers in the country who have been closely following events.

Protesting the government’s failure to boost wages as promised, municipal street cleaners in the city of Nanjing collected garbage on their normal routes and then piled it high on busy city streets, obstructing pedestrian and car traffic.

And in a highly unusual coordinated campaign, Pepsi bottling workers in five cities all took a day off November 14 to protest the sale of their plants to a Taiwanese company. China Labour Bulletin reported that at least 1,100 of the 1,300 workers at one plant joined the protest, which was followed by an online campaign to bring in all 20,000 workers from 24 Pepsi bottling plants in China.

Strikes are not limited to factory workers: This week 100 clerks at a Tesco supermarket in the eastern province of Zhejiang have been camping outside the store to block customers’ access, protesting low wages and layoffs.

Car salesmen from throughout China descended on the national headquarters of China’s domestic auto manufacturer Biyadi in mid-October, protesting layoffs and violations of their labor contracts. And teachers’ strikes erupted in many cities, sometimes joined by students and even parents.

Heat on the Union

In the face of widespread worker indifference or hostility to the All-China Federation of Trade Unions (ACFTU), some union officials, academics, and even government spokespeople are warning that the union needs to take on the role of defender of workers rather than management’s intermediary.

Without the union’s backing, workers launch tens of thousands of short, spontaneous strikes in China each year. Many of the wildcats are defensive—seeking unpaid wages or owed benefits—but increasingly the demands are confident and economically aggressive.

A two-week strike at a Honda transmission plant last year alerted observers to a changed tone in worker mobilizations.

The Honda workers demanded higher pay, and most unusually, they also demanded—and won—the right for workers to elect their own representatives.

In the top-down mode of the Chinese union, the provincial-level union responded by overseeing the creation of at least 30 new union rep positions in the transmission plant, to be filled by direct election—a highly atypical development. Several spots featured competitive races, according to university researchers.

For the first time at this factory, an elected group of workers participated in the two rounds of collective bargaining that followed the strike, which resulted in roughly doubling wages to $280 per month.

In industrialized Guangzhou, where millions of migrant workers from other parts of China churn out consumer goods for the world, the municipal-level union has undertaken research on workers’ attitudes. Results show the continuing weakness of the union in representing workers.

One extensive survey revealed that, in businesses not owned by the state, only 30 percent of workers would turn to the union for help with workplace problems. Fifty-three percent would go to the government’s Labor Bureau, and 33 percent to management.

Xinhua, the official government press agency, said in a May article, “Many migrant workers say they consider labor unions to be empty shells, rather than institutions that can effectively protect workers’ rights.”

Indeed, union officials are often members of management. At the Honda plant, the union chair was head of the factory’s support department, supplying the cafeteria.

One student researcher, interviewed later in Guangzhou, noted ironically that it was a good fit for a union limited to social functions: “The union’s job is to organize basketball games,” he said, “so it’s a similar job.”

After the strike the chairman gave up his management position but remained the union chair with a company-paid salary of $31,400 per year, nearly 10 times what workers made post-strike.

In the wake of the strikes and continuing labor shortages in eastern industrial cities, the ACFTU has given prominent public attention to advancing collective bargaining, with announcements trumpeting contracts for large swaths of workers, such as 450,000 restaurant workers in Wuhan.

Guangzhou researchers say there’s little indication, though, that these agreements go beyond what is already required by law—a tiny minimum wage and required social insurance payments.

The increasing worker unrest has piqued the interest of students. Although most are caught up in wondering where they’ll find jobs in China’s increasingly competition-wracked economy, a few pioneers are taking factory jobs during their holidays to educate themselves about the conditions faced by migrant workers and to report on those conditions through micro-blogs and informal presentations at their universities.

Several were interviewed this fall in Guangzhou, but couldn’t agree to use their real names for fear of watchful authorities.

One undergraduate worked on the line at a Dongguan toy factory this summer sewing smiles on stuffed horses for Disney and Walmart (color coded: pink and purple for girls, black and gray for boys).

Armed with nine pages of questions developed by a group of students who are devoting themselves to learning more about the lives of migrant workers, she found harsh noise from machinery and no earplugs, no air-conditioning in temperatures nearing 100, sore throats from fibers in the air, very bad food, mosquitoes and flies, and line leaders who admonished the girls not to talk while working.

Those were the conditions in the mostly female sewing department. In other departments, electric tools and chemicals were hazards.

For a base wage of $173 per month, she and migrant workers from poorer provinces worked 10 hours a day. The “aunties” on the line—workers with more than five years—were worried about the relatively short hours; the factory had been known to work till midnight and on weekends. True to lean production principles, the Hong Kong-based owner contracted and laid off workers as needed.

The giant Foxconn factory in Shenzhen that produces iPads and iPhones has been much studied since 10 workers there committed suicide in 2010. Foxconn’s response was to install nets outside dorm windows so workers couldn't leap to their deaths, and make workers sign a legal document promising not to kill themselves.

One former student found it easy to get a job at Foxconn this year because of a shortage of workers. His job gave him 29 seconds to cut the edges off the bottom half of phone cases and fix small defects. His 17-year-old partner was in charge of packing.

As he worked from 8 a.m. to 8 p.m. in the din of machines and assailed by unpleasant smells, his hair and skin were covered with metal dust. From his $173 monthly base wage were subtracted $14 for dorm space and $52 for very bad food.

Medical students who spent a week undercover at Foxconn reported they were asked to sign papers saying they would never tell or ask anyone their wage; if they did they could be fired with no severance.

The student made it a point to ask fellow workers, “Do you have a dream?” Most wanted to open a small store back in their home province. None thought they would stay at Foxconn.

See this map of strikes in China. It is necessarily incomplete because many strikes are not reported in the media.