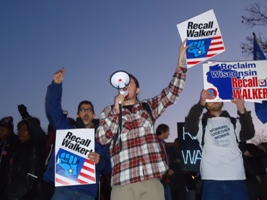 Wisconsin teachers are feeling the pinch as the consequences of Governor Scott Walker’s anti-union bill set in. The campaign to recall Walker announced late November it had 300,000 of the 540,000 signatures needed by mid-January to force a vote. Photo: Wisconsin AFL-CIO.

Wisconsin teachers are feeling the pinch as the consequences of Governor Scott Walker’s anti-union bill set in. Some are facing 11-hour workdays and reduction in sick leave as school boards unilaterally set punishing new standards.

Education budget cuts of $1.6 billion eliminated about 4,000 teaching and support positions statewide. The union is reaching out to parents and grandparents to stress the impact the layoffs will have on students—and hopes to build on those relationships in its effort to recall Walker and overturn the law.

Christina Brey, a spokeswoman for the Wisconsin Education Association Council (WEAC), noted that elements of the law’s implementation, such as what specifically constitutes collective bargaining, are yet unclear. “The legislation was created that way—to keep everything in chaos,” she said. “Instability is something that this administration has thrived on when it comes to public workers.”

Teachers in the Milwaukee suburb of New Berlin have been organizing against a handbook that was implemented without teacher input at the beginning of the school year.

It includes provisions for a work day as long as 11 hours, elimination of preparation periods during the day, and additional training after work without compensation.

The school board claimed that soliciting teacher input would amount to illegal collective bargaining, even though other districts did so without state interference.

Grievance procedures have turned into a “kangaroo court” whose highest body is the school board, said Ellen La Luzerne, a WEAC regional staffer for suburban and rural districts south and west of Madison.

Five WEAC locals in the Milwaukee area, along with AFT Local 212 and AFSCME, mobilized 200 members to the back-to-school board meeting at which the New Berlin handbook was adopted.

The union’s efforts were enough to beat back some of the provisions, including demeaning skirt length requirements and a cut in sick days by more than half.

Still, the new handbook eliminated a sick leave bank, in which members pooled extra days to aid stricken colleagues, such as those with cancer, who’d run out of their own sick days. Staffer Steven Cupery said the district is hurting people at “their greatest time of need.”

The school district called the teachers’ mobilization “union bullying,” and board members complained that the union brought outsiders to the meeting.

Cupery said the district has “no problem with outsiders and bullying when it’s the Tea Party.”

He said right-wingers mobilized by a wealthy Milwaukee talk radio host heckled teachers at the meeting, interrupting them during public comment and pelting them with pacifiers.

With dues checkoff gone, collective bargaining outlawed, and unions decertified by default, the new environment has forced WEAC to take an organizing-model approach and get closer to its members.

The union is ratcheting up its activist base by holding more meetings, producing newsletters more frequently, pushing a union message through social networking, and spending more time in one-on-one conversations with members.

Still, keeping the union afloat without steady financing is taking a toll. In anticipation of lost revenue, 40 staffers got layoff notices in August.

Units with contract extensions that preserved dues checkoff softened the blow, as did the hard work of WEAC staff and members who signed members up for dues collection. About half the layoff notices were rescinded.

Under Governor Scott Walker’s law, members must vote each year to recertify their existing union as their collective bargaining agent. Many unions in Wisconsin are skipping the process.

Larger unions, such as AFSCME Council 24, have determined that the resource cost outweighs the benefits of recertification. The state teachers union is leaving the matter up to individual locals.

Some are seeking recertification because some benefit remains in preserving official bargaining representative status.

Unions that maintain certification can bargain for wage increases, although these are limited by the new law to the Consumer Price Index. In maintaining their status, unions hope for a seamless transition if collective bargaining rights are restored legislatively.

Walker’s law gave teachers a wage cut of 5 to 15 percent this year due to increases in pension and medical contributions. Support staff took cuts of up to 20 percent.

The union is striking back against Wisconsin’s conservative movement, going after its paragon Scott Walker in a recall effort that kicked off November 15.

After the uprising that brought 100,000 into the streets last winter against Walker’s law, Wisconsin unions tried to recall six Republican senators this summer. They managed to defeat only two of the three they needed to flip the senate.

But through its coalition work in the recalls, the teachers union realized it could mobilize a broad base of Wisconsinites, not just its own members, Brey said. With the Walker recall, the union sees an advantage in a statewide vote, too, rather than trying to win in senate districts that tilted Republican.

The Walker recall will proceed without financial backing from national unions, however, so WEAC will rely on its energized membership to get friends, family, and neighbors out to the polls. Recall campaigners announced late November they had 300,000 of the 540,000 signatures needed by mid-January to force a vote.

Teacher unions are also using the struggle against the handbooks as a rallying point to recertify the union.

Cupery says his union faces a hostile management campaign. Administrators are meeting one on one with employees, telling them the union is an outside agent and has no place in a cooperative workplace.

Firing back, the union is asking members if they are better off than they were a year ago. The answer seems to be a resounding “no.”

“Many of our best teachers plan on leaving the district or leaving education altogether,” wrote Diane Lazewski, New Berlin’s teacher union leader, in an email. “Morale is so low it can’t help but affect the entire atmosphere. Teachers are shutting down.”

A version of this article appeared in Labor Notes #393, December 2011. Don't miss an issue, subscribe today.
Related
As Omicron Rages, Teachers and Students Fight for Safety Measures in Chicago and Elsewhere »
Steward's Corner: Using Pressure to Settle Grievances »
Teachers Strike against a ‘Heartless’ School Board in Biden’s Hometown »
How Oakland Teachers Took Control of Our Return to School »
New Jersey Welfare Workers Sound the Alarm on Safety »