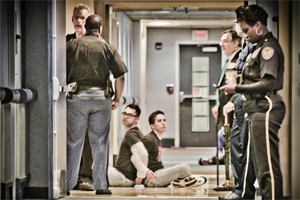 Young immigrants in Alabama were joined by out-of-state allies this week for a series of actions to announce they are undocumented and unafraid of the country's harshest anti-immigrant law. Sit-ins in the Capitol accompanied weeks of door-to-door organizing. Photo: Steve Pavey.

Young immigrants in Alabama were joined by allies from labor and civil rights groups this week for a series of actions to announce they are undocumented and unafraid.

Alabama is home to what’s been called the harshest anti-immigrant law in the country. Members of an organization led by undocumented youth and allies from five other states convened in Montgomery, the state capital.

They’re sending a message of resistance to state politicians and to Alabama immigrants living in fear of a law that gives police the right to stop and investigate anyone they “reasonably suspect” of being undocumented—an open invitation, in other words, to racially profile.

The legislation also denies immigrants state medical aid and unemployment benefits. It forbids individuals and employers to hire, harbor, rent property to, or even give a ride to undocumented immigrants. Public schools must check the immigration status of children when they enroll, and one town threatened to cut off water to residents unless customers provided state ID.

Since every contract or professional license now requires a check of documentation status, courts have been jammed and everyone from cosmetologists to civil engineers has complained. Some Republicans are decrying the law’s “unintended consequences” and saying they need to pull back many elements of the original legislation.

On Tuesday a wave of actions confronted lawmakers and took over streets in Montgomery, with activists sitting down to block traffic. Nine students and four parents were arrested.

The day started with 70 protesters marching in streets around the Capitol chanting “no courage, no change” and “undocumented, unafraid, and unashamed.”

As police tore down the Occupy Oakland site on November 14, another segment of the 99 percent emerged into the spotlight—undocumented immigrants.

Francisco Ramos-Stierle, or “Pancho,” as his friends call him, was part of a small group of activists who remained behind to meditate as cops descended on the camp.

Pancho was arrested and is now facing the very real possibility of deportation.

“I’ve known Pancho for years and he’s been peacefully struggling for justice long before this occupy thing picked up,” said his friend Jesus De Sebastian, a Laney College student in Oakland. “I cannot believe that someone can be arrested and face deportation for peaceful meditation.”

About 60 Occupy supporters gathered on Tuesday in front of Glen Dyer Jail where Ramos-Stierle was being held. They held a moment of silence to reflect on the heavy cost their friend is paying for defending the 99%.

On Wednesday all charges were dropped, and he was released a day later, after officials decided not to hand him over to ICE. But he must appear before an immigration judge.

The Obama administration announced earlier this summer that it will focus on deporting criminals while halting the deportation of student immigrants and others with ties to community and clean criminal records. The policy has been applied unevenly, leading Occupy activists to worry Ramos-Stierle might still be at risk.

Ernesto Zumaya, 25, from Los Angeles, and Cesar Marroquam, 21, from Pennsylvania, sat down in the statehouse lobby and locked arms in protest of the law and in an effort to inspire other immigrants in Alabama to come out of the shadows and resist.

“Activists in Alabama are fully aware of the history of racism in this state,” said Mohammad Abdollahi, an undocumented organizer with the Alabama Youth Collective. “This is history repeating itself, and we’re here to say—enough.”

Other protesters entered the Capitol with them to deliver a letter to Senator Scott Beason, who said the state should “empty the clip” on immigrants, demanding he cease spewing hateful rhetoric.

Protesters said the message should have resonated loud and clear, considering the fate of Arizona state Senator Russell Pearce, who sponsored the original state anti-immigration law that spawned copycat legislation across the nation. Pearce was recalled by voters November 8.

At the same time another 11 undocumented activists took over an intersection outside. Activists realized that the sit-down could carry heavy consequences: They would certainly be arrested and could easily face deportation.

Montgomery Police Chief Kevin Murphy told press that protesters would be asked for “papers” and if they could not produce them, local law enforcement would be in contact with immigration authorities. Two days later, activists reported no contact with Immigration and Customs Enforcement (ICE) officials.

On Thursday Montgomery Mayor Todd Strange announced that demonstrators who were arrested are all legal residents, in an attempt to move shift media focus away from the immigration debate. “It’s crazy,” Abdollahi said. “We’ve never been asked to prove we’re undocumented.”

A court date for the activists has been set for February 27 in Montgomery Municipal Court.

Out of the Shadows, into the Streets

Protesters had another target in mind besides politicians: They want the undocumented immigrants who are fleeing the state and pulling their children out of school out of fear of deportation to know they are not alone—and that they too can resist the law.

“Going door to door, we talked with folks and educated them on why we’re putting ourselves in the crosshairs of anti-immigrant laws and why we need to lose the fear and fight back,” said Reyna Wences, an organizer with Immigrant Youth Justice League in Chicago.

The out-of-town supporters joined Alabama Youth Collective organizers in a small trailer park just outside Birmingham, where they have been preparing for the past month by building community support. The activists headed to factories, trailer parks, schools, and local community hubs to speak with immigrants and educate them on their rights.

Immigrant workers in Alabama had already organized direct action on their own. Last month in Albertville, in the state’s northeast corner, they pulled one-day wildcat strikes in poultry plants that saw more than 2,000 workers walk out. Dozens of local business shut down for the day in support.

Abdollahi said the state’s immigrant community is responding. “People are calling radio stations and sharing their stories for the first time,” he said. Some are literally coming out.

At the same time, the AFL-CIO sponsored a delegation to Alabama to hear testimony from immigrants on how the law is affecting them.

The October wildcat actions and this week’s sit-ins organized by young activists are an attempt to force the nation to pay attention to harsh immigration policies that have only grown harsher under President Obama.

Under the Obama administration, nearly 400,000 undocumented immigrants have been deported this year—a record. The “secure communities” program that forces local police to cooperate with ICE has led to 1,100 immigrants being deported per day, according to Martin Unzueta, a Chicago worker center activist who was arrested in Alabama. Many are deported after being pulled over for speeding or having broken tail lights on their car.

Will the actions galvanize more immigrants to stand up against extremist laws? Activists are uncertain, but they are convinced that immigrant rights groups must organize, and not restrict themselves to court fights against the new crop of racist laws.

Related
Viewpoint: Abolish the H-2A Program! »
Staten Island Amazon Workers Pull into the Lead, While Bessemer Re-Vote Is Too Close to Call »
How Starbucks Workers Won in Mesa »
Christmas On Strike: Warrior Met Miners Stick It Out »
Striking Alabama Coal Miners Want Their $1.1 Billion Back »