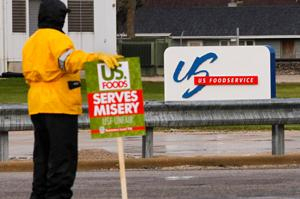 Teamsters in five states are refusing to cross picket lines at U.S. Foods, the nation's second-largest food services company, in sympathy with strikers at one Illinois warehouse. Photo: Teamsters.

Taking advantage of contracts that allow members to honor picket lines, Teamsters are spreading sympathy strikes across the country at the nation’s second-largest food services company.

The union’s 4,000 members work at 25 distribution centers for U.S. Foods, which delivers to restaurants, hospitals, military bases, and jails. Each group works under different local agreements. This is the first time they’ve coordinated strike actions.

“People understand our turn in the barrel may be next,” said Jamie Young, a driver who belongs to a Washington state local due to stop work at 2:15 a.m. Friday. “Our contract is coming up in three years, we want their support—it’s pretty far-sighted.”

The Teamsters said more than 830 workers in five states have joined the action thus far.

The union is following the law and its contracts in spreading the strike. Under the National Labor Relations Act, strikers can picket other facilities owned by their company. Most Teamster contracts at U.S. Foods allow members to refuse to cross picket lines set up by other U.S. Foods employees.

The Teamsters used similar tactics to make huge membership gains in the 1930s and 1940s. Congress restricted sympathy strikes in the 1947 Taft-Hartley Act, and the Teamsters have been one of few unions to preserve the tactic.

The union says the company escalated its aggression after its purchase by private equity firms Kohlberg Kravis Roberts and Clayton, Dubilier & Rice. The company closed a Boston warehouse, firing 114 Teamsters, and shipped work away from the union. Bargaining in Nevada included a demand for unlimited health care cost increases. Organizing drives have been met with fierce resistance, including firings, and have sparked hundreds of unfair labor practice charges.

In Fife, Washington, a sister local to the U.S. Foods local is setting up and staffing the picket lines. Once the company has had 72 hours’ notice, Local 117 members will refuse to cross those lines, for a period of 12 hours.

Even if management wanted to drive the trucks out beyond the picket line and then tell union members to drive them, a common tactic for Teamster employers, the pickers inside the warehouse aren't going to put anything in the truck, Young said.

Young says there are plenty of reasons for members to feel ready to strike U.S. Foods, which is constantly surveilling workers and pushing for more productivity.

On his first day on a new route, he didn’t know the locations or where to park. But management “sent a tailer out to watch me,” Young said. “He wrote me a letter that night for lack of productivity.”

A version of this article appeared in Labor Notes #393, December 2011. Don't miss an issue, subscribe today.
Related
Swarming Solidarity: How Contract Negotiations in 2021 Could Be Flashpoints in the U.S. Class Struggle »
BAmazon Union: Anticipating the Battle in Bessemer, Alabama »
Auto Workers to Vote on Direct Elections »
Cleveland Heights Teachers Strike in the Snow, Beating Austerity with Solidarity »
When You're Winning in the Streets, Don't Lose at the Bargaining Table »