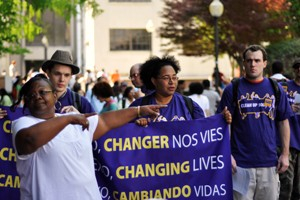 A long-running corporate campaign by the Service Employees to organize workers at the food-service multinational Sodexo ended shrouded in secrecy in September.

Sodexo had slapped SEIU with a lawsuit charging that the union’s attempts to pressure the company into a deal to allow organizing amounted to “extortion.” A judge refused in July to dismiss the suit, filed under the Racketeer Influenced and Corrupt Organizations Act.

RICO was originally intended to be a tool against organized crime, but corporations have used it against unions since the late ’80s, to stop corporate campaigns that bring pressure on a company from all angles and seek to win concessions by bruising a company’s brand image.

In this case SEIU and student groups pressured administrators to kick Sodexo out of school cafeterias unless the company permitted unionization. French Sodexo workers demonstrated at company headquarters in Paris, joined by Sodexo workers from Colombia and the U.S. The union pushed the Marines to deny contracts to Sodexo at base cafeterias, and won a $20,000 settlement for a worker who was illegally fired.

The union also dispatched protesters to invade Sodexo events, in one case tossing plastic roaches on tables to dramatize the company’s spotty record on cleanliness.

SEIU reached an agreement (which it called “amicable”) with Sodexo to end the lawsuit in September. The full terms of the settlement are secret, but in a statement, SEIU said it will halt its public campaign against Sodexo, stop asking other groups to join in, and end organizing tactics that “interfere or impair” Sodexo’s relationship with its clients, mostly schools, stadiums, and companies that offer employees a cafeteria.

Unlike other settlements that ended corporate campaigns—like the ones SEIU and the California Nurses struck with HCA hospitals—the Sodexo deal expressly preserves the right for each side to disparage the other (provided the information is truthful).

SEIU feared exposing the union and top officers to triple damages that could have reached into the millions under RICO’s provisions, and didn’t relish the airing of thousands of emails on campaign strategy.

Sodexo has 120,000 employees in North America. Thirty unions represent 18,000 workers among them.

It’s unclear if the agreement includes provisions for union access to Sodexo workers at their worksites, expedited elections, “open windows” of opportunity to make contact with workers, or monitors who bypass lengthy Labor Board hearings and are empowered to quickly rectify instances of intimidation, retaliation, or other employer abuses.

Union organizers say those rights have been key to RICO settlements that have led to organizing success. Without them, it’s unclear how the union will be able to organize Sodexo workers on a large enough scale to affect industry conditions.

Sodexo had previously agreed to a secret organizing deal with both UNITE HERE and SEIU. The two former partners in the Change to Win federation had formed a joint union called Service Workers United in 2005.

To seal the deals with Sodexo and a competitor, Compass, SWU agreed to skimpy contract standards that were settled before the first worker signed a card in the low-wage, hard-to-organize industry. The deals allowed the companies to fire workers who slowed down or picketed.

The companies reserved the right to choose where the union would organize and how many total members could join. Sodexo capped organizing at 11,000 workers through 2008, scattered approved organizing sites across the country, and forced the union to pull the plug on other drives. The companies also established separate expiration dates for each shop, atomizing members’ bargaining power.

Four years later the deals with management collapsed and UNITE HERE and SEIU dissolved their alliance. They parted ways after SEIU engineered a split of UNITE HERE and wooed away a portion of the union.

The unions called a truce last year, but agreed to continue to compete in food-service organizing. SWU disappeared.

In the first vote since the RICO suit settlement, SEIU won an election among 28 Sodexo workers at Whittier College in Los Angeles October 13.

“These workers had been organizing for two years already and had been part of the national movement at Sodexo,” said Mike Chavez of SEIU’s United Service Workers-West.

After the split with UNITE HERE, SEIU campaigned actively at universities in Atlanta and New Orleans and at Ohio State, where 25 students, workers, and union leaders were arrested in a protest last November.

Sodexo workers organizing with SEIU struck at seven U.S. locations a year ago, to push the company to recognize their unions.

The settlement that ended the corporate campaign won’t stop that organizing. Rubynell Walker-Barbee, a Sodexo cashier at Morehouse College in Atlanta, said union activity slowed with the lawsuit, but monthly meetings with organizers continue.

Walker-Barbee walked out for a shift with 13 co-workers last October. She wants the company to acknowledge her union.

Working for Sodexo is “really stressful and very unpredictable,” she said. “You don’t know where you’re going, you never know if you’re going to have a job.”

Walker-Barbee has taken a second job at TGIFriday’s to pick up the slack in hours. She says Sodexo lays workers off during school breaks, then puts them through orientation again, where there are “more threats, more intimidation.”

Sodexo reacted to talk of a union at Morehouse by restoring hours for one of the men who struck, and by making sure workers take their 15-minute breaks. A year later, Walker-Barbee said, “it’s just camouflage.” Workers still need steady hours, predictable raises, and affordable health insurance.

Corporate campaigns aimed at achieving employer neutrality and winning union recognition by demonstrating majority support through card check have been an SEIU hallmark since its Justice for Janitors campaign two decades ago. (The union’s willingness to trade lower contract standards for neutrality has earned it many critics.)

Many unions have faced RICO suits before, and despite the bad press resulting from headline associations with “racketeering,” they’re not the bosses’ silver bullet.

“It does strike fear, it does create pressure on workers, but not one employer has ever won one,” said Cornell labor researcher Kate Bronfenbrenner.

The last public battle over racketeering charges was at Smithfield’s huge slaughterhouse in North Carolina, where a 16-year campaign by the Food and Commercial Workers was met with a RICO suit in 2008. The company tried to claim that efforts to inform city councils, congregations, and schools about Smithfield’s labor record amounted to a conspiracy.

The UFCW pulled its campaign and settled the suit with an agreement for a fast election, access to the plant’s 4,600 workers inside the workplace, and an election monitor to rule on violations immediately. The union won convincingly.

But the “air campaign” that brought information about Smithfield’s working conditions to consumers wouldn’t have been effective without a strong “ground campaign,” said Gene Bruskin, who led the Smithfield drive in its last three years.

“We felt we could create substantial problems for the company in their production, and the only way we could was with leaders in that plant,” Bruskin said. “The inside-outside dynamic made it much harder for management to do what they wanted, because there was a spotlight on them.”

Eventually Smithfield wanted to stop fighting and get back to production, Bruskin said.

The strong committee inside the plant laid the groundwork for a successful local—which won a contract in six months.

Unions will not give up on the corporate campaign strategy, said Russ Davis of Massachusetts Jobs with Justice. JWJ was named as a defendant in the Smithfield RICO case.

“Ultimately, you have to be willing to take intelligent risks,” he said, like working with students who might break rules even when the union wishes they wouldn’t.

The risks are easier to take, he said, when, as at Smithfield, it’s clearly an “authentic campaign driven by workers.”

Jenny Brown contributed to this story.

A version of this article appeared in Labor Notes #392, November 2011. Don't miss an issue, subscribe today.
Related
Review: On the Line: A Story of Class, Solidarity, and Two Women’s Epic Fight to Build a Union »
Steward's Corner: How to Think Like an Organizer »
Hotels Don't Waste a Crisis »
Hawaiian Hilton Workers Fear Permanent Layoffs As Recall Rights Expiration Nears »
Inside the Alabama Amazon Union Drive: An Interview with the Lead Organizer »