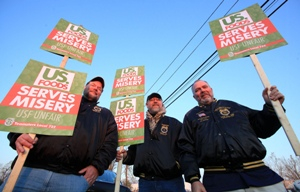 The Teamsters' pop-up picketing has been keeping US Foods guessing as it struggles to deliver perishables to its institutional customers. Photo: US Foods Workers/Teamsters.

Jumping off from an unfair labor practice strike in a bargaining unit of just two janitors, more than half the union’s 4,000 members at US Foods had joined the action by early November, the Teamsters said, and more sympathy strikes were possible.

The union’s US Foods members work at 25 distribution centers across the country that deliver every food-like product, from French fries to cream puffs, to restaurants, hospitals, military bases, and jails. Each group works under a different local agreement. This is the first time strikes have taken off nationally.

“People understand our turn in the barrel may be next,” said Jamie Young, a driver in Washington state who struck for 12 hours November 4 to support the two janitors. “Our contract is coming up in three years, we want their support—it’s pretty far-sighted.”

Young said his center normally delivers 30,000-35,000 cases of food per day, in Washington, Oregon, and Idaho.

The strike began in Streator, Illinois, when management ordered a bargaining committee member to come to work rather than attend negotiations, and then disciplined him when he declined. In response, Local 722 called an unfair labor practice strike October 30, which is still continuing.

Drivers and warehouse workers are in a separate unit, which honored the tiny picket line for a day, shutting down deliveries for the area.

The disciplined member, Mike “Scrapper” Vagasky, then traveled to St. Louis to picket US Foods’ center there—and Teamsters refused to cross. Later on November 1, he repeated the process in Fishers, Indiana.

Labor law makes such strikes difficult. Each local under contract with US Foods was bound by its no-strike clause, so in each city a sister Teamsters local set up the picket lines, often with union staffers.

The US Foods locals were not allowed even to encourage their members to honor those lines—though they could and did inform them of their right to do so, in carefully worded flyers. The result, according to the Teamsters, was 100 percent participation.

In some locals, contracts required 72 hours’ notice to management before workers could honor lines. So the sister locals picketed around the clock. Near Denver, the union said two Teamsters stood outside overnight in blizzard conditions—and US Foods workers struck for three days.

Young said the solidarity beyond state lines was “way, way overdue.” Contract standards have been slipping as US Foods seeks to cut new hires’ wages while ratcheting up production.

“We lose five or six guys they get rid of because of production standards,” said Local 722 President Steve Mongan in Streator. “Then they hire in new ones at a lower rate.”

“Each facility has their own fights,” said Local 628 Secretary-Treasurer John Dagle in Philadelphia. “The level of frustration of the employees with the company is the root cause of this.”

The rolling strikes apparently kept management off guard, Mongan said. “It’s only up and it’s gone and it’s moved on to something else,” he said. “How do you defend it all?”

The union filed a cross-grievance seeking a declaration from management that members have the right to withhold their services in support of a primary picket line, per their contract.

Mongan said the response of members honoring lines around the country has been “overwhelming.”

The Teamsters used sympathy strikes to make huge membership gains in the 1930s and 1940s. Congress restricted their use in the 1947 Taft-Hartley Act, and the Teamsters have been one of few unions to preserve the tactic.

At Verizon this year, the Communications Workers striking the company’s landline division were undermined by the non-union status of the larger wireless division. But the union took advantage of the fact that one small unit of wireless workers was organized and on strike. That gave the union the legal right to extend pickets to wireless stores throughout the Verizon service area.

The union says the company escalated its aggression after its 2007 purchase by private equity firms Kohlberg Kravis Roberts and Clayton, Dubilier & Rice.

“You try to have productive labor relations with them,” said Dagle, “but it seems that any inroads you get with local management, they’re trumped by corporate. I think it’s a corporate strategy to continue this campaign of bullying and intimidating any union facility.”

The company closed a Boston warehouse, firing 114 Teamsters, and shipped work away from the union. Bargaining in Nevada included a demand for unlimited health care cost increases.

“All negotiations with US Foods,” Mongan said, are “festered up.”

Jamie Young said management is constantly surveilling workers and pushing for more productivity. On his first day on a new route, Young said, he didn’t know the locations or where to park. But management “sent a tailer out to watch me,” Young said. “He wrote me a letter that night for lack of productivity.”

In Swedesboro, New Jersey, management tried to install video and audio cameras in the trucks without negotiating with the union.

Teamster organizing drives have been met with fierce resistance, including firings, and have sparked hundreds of unfair labor practice complaints. Between 8,000 and 10,000 US Foods workers remain non-union.

Dagle tells of a worker fired during an organizing drive in Pennsylvania. The company paid a $100,000 settlement to keep him out of the workplace.

“They’ll spend any amount of money to beat their workers,” he said, noting that the strikes jumped off over two janitors who make $12.45 an hour. “US Foods would rather have service disruptions, to hell with their customers, just to beat the two workers and the union.”