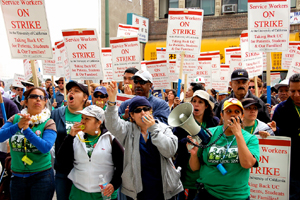 University of California service workers voted in October for a slate pledged to actions like this 2008 systemwide strike. Photo: Brooke Anderson.

After months of member-to-member organizing, a group of AFSCME Local 3299 rank and filers swept October elections in the 20,000-member union on University of California campuses.

The slate built support among co-workers, mostly custodians, gardeners, patient care technicians, and food service workers, by calling for a member-led union that would prioritize building workers’ power on the job and commit to democratic decision-making.

Fed up with concessions made under President Lakesha Harrison and Vice President Julian Posadas, many workers joined the Members First effort.

“When the leadership feels so comfortable in the place that they are put by the members, and they lose touch with the members, that’s when we all lose. We cannot afford to keep losing with UC,” said Maricruz Manzanares, a custodian at UC Berkeley.

The former leaders continue to challenge the results. They filed charges alleging the winners used union resources to campaign, tampered with votes, and racially discriminated in a staff purge.

The winners said the “trumped-up” charges were aimed at engineering an international trusteeship to restore Harrison—and ensure the huge local can’t participate in the international election next year, which will replace retiring President Gerry McEntee. Harrison is a longtime ally of the incumbent secretary-treasurer, who is running to replace McEntee.

The leadership change builds on years of organizing at the grassroots. Through the local’s Member Action Teams, groups of eight to 20 workers that coordinate activity in the workplace and the union, many workers learned nuts-and-bolts organizing and developed their leadership skills.

In 2009, the local finally won a contract with a 3 percent wage increase secured through dedicated state funds. It was workers’ first raise in seven years.

Later that year, the fight against budget cuts took a new turn. Students were facing 32 percent fee hikes and workers were looking at more layoffs and service cuts. When students occupied a building at UC Berkeley and formed lines to keep police away, AFSCME workers stood shoulder to shoulder with them and other workers to block building entrances.

As the university’s attacks on workers escalated, workers found creative ways to fight back. AFSCME members rallied last year behind 13 bus drivers who lost their jobs when the university contracted out its bus service.

They mobilized 200 workers, students, and allies to surround one of the privatized buses and mounted a campaign to reinstate the drivers and stop further outsourcing of UC work to contractors.

Student activists rode buses to educate passengers about the effects of privatization, and workers documented safety issues that were arising from hiring cheap contractors, including collisions. Within a month, the union scored a victory when UC Berkeley agreed not to outsource campus shuttle services, and today, those 13 bus drivers are back on the job.

Harrison was elected president in 2001 as part of a reform effort and campaigned on promises to revitalize the local. She says her administration created the Member Action Teams, or MAT.

“When I started, there was nothing,” says Harrison. “There was no MAT, no building takeovers, nothing. I fought for and helped build the MAT, so it hurts to be reduced to someone who makes over $100,000.”

Yet over the past year, some of the local’s victories have been rolled back. Under Harrison and Posadas’ leadership, the union gave up half of workers’ hard-won wage increase in the form of increased pension contributions.

With the backing of the AFSCME international, the two also mounted a campaign to change the local’s constitution to concentrate power in their hands.

That’s when workers who had been part of the Member Action Teams began to openly organize against the union’s program and in defense of their right to a voice.

“This was a total power grab,” Manzanares said. “They were not educating the members. That’s failed leadership.”

Harrison and Posadas needed 66 percent support to change the constitution; they enlisted money and staff from the international to help move their program.

In response, members organized weekend carpools to reach co-workers around the state. They built their own lists, held worksite meetings, and sent delegations to union-wide meetings to call for transparency, accountability, and democracy. Their efforts paid off: 40 percent voted no.

WHICH WAY ON CAMPUS?

Local 3299 is the second major University of California union to elect a rank-and-file slate this year. In May Academic Workers for a Democratic Union took over the 12,000-member graduate students union, UAW Local 2865.

The tumult on California campuses has given new leaders in both unions a solid foundation of practicing solidarity. Officers say they’re building organizations where rank and filers are building relationships with students, not just top leaders and staff.

The new leaders face challenges: UC is again threatening to outsource jobs, including the bus drivers’. More budget cuts are anticipated, as are tuition hikes of up to 81 percent. Both unions have much work to do to spread strength south of their Berkeley strongholds.

Lybarger says putting “real resources into making our members able to advocate for themselves” will help the union work “on the bigger issues” as well. “We want to be on the front lines with a lot of the struggles that are rising up right now,” she said.

Marie Choi is a labor activist and community radio journalist in the Bay Area.

A version of this article appeared in Labor Notes #393, December 2011. Don't miss an issue, subscribe today.
Related
Christmas On Strike: Warrior Met Miners Stick It Out »
Who Might Strike in 2022? Hundreds of Big Contracts Will Be Up »
2021 Year In Review: The Only Way Out Is Through »
Johnson Brothers Strikers Take Their Fight to the Customers »
This Year I’m Thankful for the Revolt Against Two-Tier »