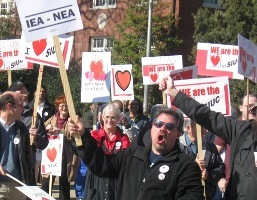 At Southern Illinois University, six hours south of Chicago, dozens of professors headed back to class November 10 after ending a six-day strike over furlough days and pay cuts.

Professors balked at the university’s demand that they take unpaid furlough days, and challenged the administration to find other ways to rein in costs. Early reports indicated they had staved off furloughs for next year and forced the university to bargain over them after that.

At the University of Illinois Chicago, teachers and staff are struggling together to form a union. At St. Xavier University, in a Chicago suburb, adjunct faculty won a ruling by the National Labor Relations Board that the school does not qualify for religious immunity from government oversight—opening the door to unionization.

In Chicago’s Loop, at private Roosevelt University, leaders of the adjunct teachers union are trying to reverse the administration’s move to cut $1 million from the school’s teaching budget, eliminate 235 classes, and raise class size from 23 to 33.

At East-West University, a small private college in Chicago, adjuncts who tried to form a union have found that their classes are suddenly no longer offered.

And at Columbia College Chicago, a private liberal arts school where adjuncts teach 75 percent of the course load, the NLRB recently issued a complaint charging management with a raft of illegal anti-union actions.

At colleges and universities around Illinois, administrations are putting new pressure on their faculty, and teachers are looking to their unions for support.

The recession in Illinois, where unemployment has edged up to 10 percent, is one factor in this newly hostile approach to workers. Hiring freezes have been announced at some of the state’s nine public universities, which are owed $500 million by the state.

White-collar professionals in many fields have lost jobs, prompting them to head to college campuses in search of work. Colleges feel emboldened by this sudden influx of burnished resumes. With a surfeit of willing workers, who needs experienced, higher-paid senior adjuncts?

Meanwhile, private school enrollment is falling as students start to fear that their thousands of dollars in student loans won’t add up to good jobs after graduation.

Most of the higher ed unions are affiliated with the Illinois Education Association. Their leaders meet regularly and support each others’ protests, picket lines, and rallies.

“It’s the ripple effect,” said LuAnn Swartzlander-Kraus, president of the 600-member Roosevelt Adjunct Faculty Organization. “Some campuses form unions, make noise, and others hear about it.”

She noted that many adjuncts teach at several campuses so they can patch together a living wage.

“The days of being in a safe job are over,” she said. “You no longer have a nice perch where you can do research, study, and teach while people pay you a nice salary.”

According to a study by the National Center for Education Statistics, almost 50 percent of higher-ed classes nationwide are taught by contingent faculty. These part-timers must reapply for work every semester; their salaries are as low as a quarter of what full-timers make.

At Columbia College Chicago, administrators recently announced that enrollment had dropped by 300 students, and immediately implemented a wage freeze.

The college’s founding mission states that the majority of faculty members will be part-time, with one foot on campus and another foot in their respective professions.

But since fall 2010, senior adjuncts with up to 20 years’ teaching experience at Columbia have complained to P-fac, the part-time teachers’ union, about losing classes. Some have seen their teaching income shrivel by two-thirds.

P-fac’s feisty new leadership, elected by an overwhelming majority and record voter turnout in 2010, replaced a sclerotic steering committee that enjoyed a cozy relationship with the provost’s office.

All that has changed under P-fac President Diana Vallera and the new steering committee.

The union has organized an informational picket line, a member rally, and a petition drive. Union leaders formed a local chapter of the American Association of University Professors and hosted an AAUP Illinois meeting in October.

P-fac has been locked in contract talks with Columbia for almost two years with little progress. The union is seeking health insurance, transparent evaluations, and contract language ensuring adjuncts can no longer be fired at a department chair’s whim.

Many grievances have been filed, as well as an NLRB charge alleging more than 30 unfair labor practices. In September, the NLRB regional office issued a complaint against Columbia, alleging bad-faith bargaining, coercion of employees, and interference in union activities.

The case is heading to a Labor Board trial in February.

Vallera said, “It’s unfortunate that Columbia College has chosen to spend more of the college’s revenues trying to excuse its bad behavior rather than settling the charges brought against it by the U.S. government.”

Nancy Traver teaches journalism at Columbia College and is publicity chair for P-fac.