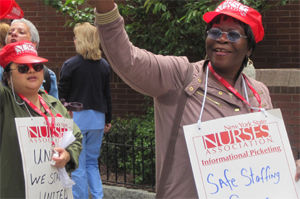 Reformers inside the New York State Nurses Association are one step closer to taking power after a federal judge ordered outgoing leaders to seat the winners of an August election. The union has mounted no coordinated contract campaigns, and reformers won respect for starting one, at events including like this Bronx rally. Photo: Jenny Brown.

Reformers inside the New York State Nurses Association are one step closer to taking power in the 37,000-member union after a federal judge ordered the outgoing leaders to seat the winners of an August election.

Members of the New York Nurses for Staffing Security and Strength slate swept all six open seats on the NYSNA board of directors in balloting results announced August 25, handing slate supporters nine of 13 board positions. Most won by 2-to-1 margins.

But the winners were blocked from taking office at the union’s annual meeting in late September by several defeated incumbents working closely with top NYSNA staff, a move U.S. District Court Judge Richard Sullivan described as “a gross power play.”

“They’re scared,” said Verginia Stewart, a recently elected board member from Metropolitan Hospital in New York City. “They haven’t been doing right by our members for a long time, and they know once we take over we’ll discover all the ways they’ve mismanaged the organization for their own gain.”

Reformers charge that top leaders granted lifetime health benefits and other perks to their allies among senior staff.

Sullivan’s October 13 order ended weeks of legal limbo, where defeated incumbents held onto power through an electoral sleight of hand, claiming that their election committee—hand-picked by the president—was unable to declare a winner until it finished processing numerous election protests.

“This is their history,” said Pat Holloman, newly elected treasurer of the NYSNA delegate assembly. “They consistently challenge the members’ will and flout the law.”

NYSNA’s outgoing leaders have appealed the court’s order and reformers will be back in front of the judge next week seeking to enforce the ruling.

Ousted leaders claim that only the Department of Labor can rule on union election challenges. The judge disagreed, saying that while he can’t rewrite union rules, he has the authority to order the union to declare a winner.

On October 18 the election committee defied the judge’s order by refusing to declare slate members the winners. Instead, the committee called for a re-run election.

The reformers’ campaign channeled member dissatisfaction with both hospital management and top union leaders. The anger was fueled by the fact that 22,000 NYSNA members are currently working without a contract, and 14,000 were hit with higher health care premiums and co-pays September 1 after the union lost a major arbitration case this summer.

“Our benefits have been assaulted—and so many of our members don’t have a contract—because our old leaders were not out there fighting for us,” said Marva Wade, a nurse at Mount Sinai hospital who was just elected president of the NYSNA delegate assembly.

“We intend to change that.”

The reformers tapped into longstanding dissatisfaction, Wade said. The union has had little interaction with members at worksites and has mounted no coordinated contract campaigns. Reformers put together their own, making flyers, producing buttons, and holding rallies.

The victory up-ends the longstanding balance of power inside NYSNA between bedside nurses and nurse executives and managers, who reformers contend are more aligned with hospital administrators than with those who provide hands-on patient care.

This tension has bubbled up in most statewide nursing organizations over the past 20 years, driving many to abandon the American Nurses Association. The 115-year-old professional association formulates standards for nursing practice and opposed nurse unionism for years. ANA includes managers in its ranks and leadership.

Such divisions fueled the creation of National Nurses United (NNU) in 2009, bringing together unions in California, Massachusetts, Michigan, and Minnesota with the United Association of Nurses (UAN), formerly the union arm of the ANA.

NNU leaders say the ANA has historically fostered elitism among nurses and consistently undermined their top legislative priority, ratios enshrined in law that limit the number of patients per nurse.

But nine state nurse organizations, including New York’s, left the UAN. Leaders feared that the organization would come under the control of the California Nurses Association, whose members comprise more than half of the new national union.

Several of NYSNA’s newly elected leaders opposed the organization’s decision to sever ties with the UAN. It remains to be seen if they will push to realign the union’s national affiliations.

On policy questions, NYSNA’s new leaders are in agreement with the national nurse union, NNU. The winners called nurse-patient ratios “the most effective way to ensure patient safety at the bedside, as documented in study after study.”

The new leadership is sober about the challenges ahead: aggressive hospital administrators intent on trimming pay and benefits and jacking up workloads, budget battles that are tightening state and federal hospital reimbursements, and a long-disconnected membership. Only 7 percent voted in the August contest, slightly more than in previous elections.

“We want to demonstrate to the membership that everything we told them, we back it up with action,” Wade said.

“Our No. 1 priority is winning strong contracts, and collective action is the way to get there,” Holloman said. “The members made it clear they want to have a transparent, inclusive, member-driven organization.”

For Wade, re-engaging members is the way to defend nurses’ contract standards and practice. “Democracy is the key to our strength,” she said.