Deadline for Rail Strike Looms, but Delay Is Likely 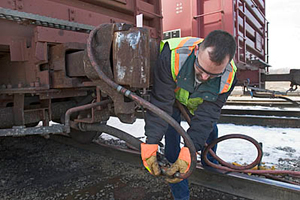 Update: President Obama forestalled a strike Thursday night by appointing a Presidential Emergency Board to make recommendations on a contract.

As the clock ticks down to a midnight Thursday strike deadline, railroad workers aren’t holding their breaths despite a 97 percent strike vote by the Locomotive Engineers union (BLET).

If President Obama follows precedent, he will appoint a Presidential Emergency Board, halting any strike. The PEB would then have 30 days to recommend a contract settlement, followed by a 30-day “cooling off period.”

The board’s recommendations will be influenced by the breakaway settlement reached in June by the United Transportation Union (UTU), which represents 40,000 conductors, brakemen, yardmasters, and other crafts.

If the other 11 rail unions, with 92,000 members, go on strike after the cooling-off period, Congress can intervene and pass a law imposing the contract anyway, as it has done in the past. The House Transportation Committee, which has jurisdiction, is chaired by Republican John Mica of Florida, who has shown his attitude toward railroads by proposing to liquidate Amtrak.

The contract covers all the major freight railroads and a host of smaller ones. The four largest freight railroads, Norfolk Southern, CSX, Burlington Northern Santa Fe, and Union Pacific collectively made $8.5 billion in profits last year.

The UTU bargained separately from the other rail unions, which formed two other bargaining coalitions. BLET and the Brotherhood of Railroad Signalmen were the only unions to take strike votes.

The UTU contract, ratified with a 60-40 percent vote, includes wage hikes of 17 percent over five years (retroactive to January last year) and a freeze on members’ health care premiums at $200 per month for six-and-a-half years. It institutes $400 family deductibles and co-pays for the first time. The Rail Labor Bargaining Coalition, representing six unions, estimated that if all the unions signed a similar agreement, health care savings to the railroads would exceed a half-billion dollars over five years.

BLET President Dennis Pierce rejected the health care concessions, pointing to the industry’s record profits and adding, “It is shameful that the carriers have chosen to specifically target those railroad workers who are most vulnerable—older workers and the sick and injured—to shoulder a disproportionate share of the demanded givebacks.”

In campaigning for ratification, UTU officials warned members, “Historically, rail unions do poorly after rejecting tentative agreements,” and quoted a 1996 arbitration board to the effect that the railroads’ profitability was no justification for wage increases.

The 1926 Railway Labor Act prescribes a lengthy process before rail unions can exercise “self-help,” that is, strike. As the employers association explains, “The Act was expressly designed to avoid disruptions to rail transportation because of labor disputes.”

John Wright, an engineer based in Louisville, Kentucky, says a big chunk of UTU members on his railroad, CSX, weren’t allowed to vote on the national contract—all those “south of the Ohio River and west of the Mississippi.”

Their locals have what the union calls “on-property agreements” that include various concessions on wages, bonuses, or work rules.

Ed Michael, an engineer in Salem, Illinois, said Tuesday his co-workers were “cynical but excited” about the prospect of a BLET strike.

“There’s a lot of skepticism,” Michael said, remembering a previous six-hour strike ended by Congress, “but they are revved up. My local chairman just went out and bought a bullhorn.”

A version of this article appeared in Labor Notes #391, October 2011. Don't miss an issue, subscribe today.
Related
Swarming Solidarity: How Contract Negotiations in 2021 Could Be Flashpoints in the U.S. Class Struggle »
Cleveland Heights Teachers Strike in the Snow, Beating Austerity with Solidarity »
When You're Winning in the Streets, Don't Lose at the Bargaining Table »
Understaffed and Unsafe, Bay Area Hospital Workers Strike »
Lessons from the NBA Strike for Black Lives »

It would be national news if the railroad workers would defy these "presidential emergency boards" and just go on strike.

Grovelling before the law is never going to win workers' demands - it takes a fight to win!

If they shut down the railroads, THAT would be national news and they would get coverage!

There is no national news coverage because it's a non-issue for the everyone but the labor coalitions or the railroad coalitions. There will be no impact on the nation because like the banking industry it is too large and too important to let negotiations get to a point that anyone outside of the industry be impacted by it. It's just not noteworthy enough because it CAN'T be noteworthy enough.

The rail industry would be completely happy (as they have in the past) to let the "negotiations" go on indefinitely because they get all of the benefits of continued revenues without disruptions to service. They aren't required to pay equivalent inflationary raises to payroll, but can continue to reap profits in line with that inflation (and much more as we've seen in the last decade) for as long as no new contract is in place.

The statement that probably has the most effect on labor's outcome as far as a new contract is: 'In campaigning for ratification, UTU officials warned members, “Historically, rail unions do poorly after rejecting tentative agreements,” and quoted a 1996 arbitration board to the effect that the railroads’ profitability was no justification for wage increases.' While I don't agree that rail unions do poorly after rejecting tentative agreements, I do agree that the precedent has been universally set that business profitability is (and never will be without major economic reform in this country) no justification for employee wage increases, and this applies almost universally, not just in the rail industry.

In all likelihood the UTU ratification is probably going to be the death of any hope for a significantly better outcome to the end contract that we either ratify or get forced upon us.

The saddest part of the whole situation is that Pres. Obama has a real chance to gain solid labor support with a truly favorable board appointment (I mean with the rail labor members not just endorsements from the unions themselves.) but I highly doubt he will accomplish it.

I wonder why this is being kept so quiet on national news channels......i would think the nation's frieght screeching to a halt would at least get some interest?