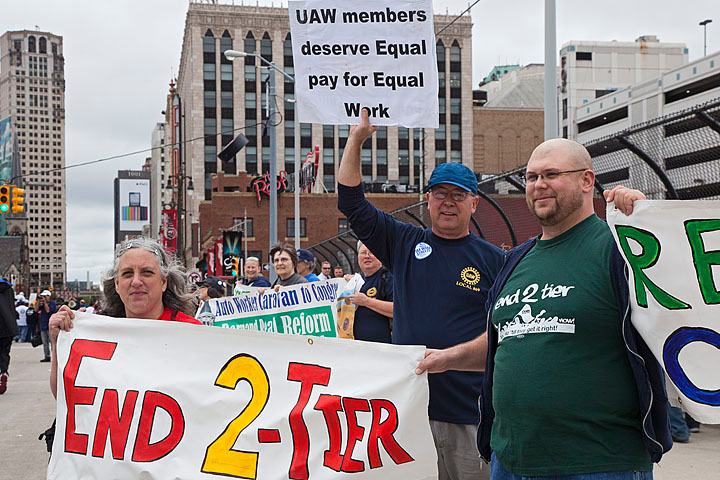 Auto worker dissidents are claiming progress in their months-long campaign against the
two-tier system that pays new hires about half a “traditional” worker’s wage.

As bargaining for new contracts with the Detroit 3 automakers began this summer, United Auto Workers President Bob King said the union was seeking no wage increases, only profit-sharing. But last week King said his highest priority was a pay hike for “entry-level” workers. They now make $14.50-$16.50 an hour, which King said could not provide a middle-class standard of living.

“Two tier is the worst thing to happen to the labor movement since World War II,” said Gary Walkowicz, a bargaining committeeperson at Ford, who ran against King for the union presidency last spring.

At Detroit’s Labor Day parade, workers held banners demanding “End 2-Tier” and “Equal Pay for Equal Work” and got thumbs-ups from UAW marchers. At a meeting held afterward, workers vowed to agitate for a “no” vote if progress is not made on ending two-tier.

At a public forum last month, second-tier workers from Chrysler, Ford, GM, and parts suppliers told of the disunity created by differing wage scales—sometimes as many as four in one factory. At a parts plant in western Michigan, said Frank Hines, “the only solidarity we have is first tier sticks with first tier, second tier sticks with second tier, and third tier sticks with third tier.” Starting pay of $9.67 is locked in for six years.

Mark Ayres of the same plant said, “It’s pretty hard to build solidarity when they can go down the street to Walmart and make more money.” (Read more Labor Notes’ coverage about the downward trend in U.S. manufacturing wages and how auto jobs have changed for the worse since the 2009 bankruptcies.)

Unlike many unions, the UAW runs no contract campaigns to pressure the companies during bargaining—no buttons, T-shirts, rallies, or even clear demands. Rank and filers and local officials glean snippets from the newspapers, and wait to see what bargainers will bring back. The three contracts expire September 14.

Autoworker Caravan and other dissident websites have attempted to fill the gap, circulating flyers by the thousands demanding equal pay and restoration of the cost-of-living allowance, which workers gave back in 2009. T-shirts sold in the plants read “= Pay 4 = Work = Solidarity!”

The group will post online an analysis of the tentative agreement—and are also demanding plenty of time for workers to study it before voting. Walkowicz said workers need to look for hidden concessions or loopholes not explained in the union’s “Highlights” handout. At GM in 2009, for example, a seemingly harmless clause said the parties "will work together...to arrive at innovative ways to staff [small car] operations." That language was used to justify putting 40 percent of a Michigan plant’s workforce at permanent second-tier wages, with no vote by those affected.

The auto negotiations are perhaps unique among all contract talks in the U.S. in the last five years: management is not openly demanding that workers pay more for health care. (The unions gave up pensions for new hires in 2007, the other top demand among companies both extraordinarily profitable and less so.)

Ford made $6.6 billion in 2010 and GM $4.7 billion. Chrysler saw an operating profit but posted an overall loss of half a billion because of interest payments on its loans from the American and Canadian governments. This year the companies handed out profit-sharing checks for the first time in many years: $5,000 at Ford, $4,300 at GM, and $750 at Chrysler. King has often said that each worker has given up a total of $7,000 to $30,000 since 2005.

Management is still intent on maintaining the wage freeze in effect since 2005, and on replacing current workers with cheaper new hires.

With almost all laid-off workers now recalled, and with auto and truck sales booming, the number of lower-tier workers will increase sharply. The companies are likely to offer buyouts to current workers to hurry the process along.

At GM and Chrysler, workers are forbidden to strike when the contract expires, as a condition of the 2009 government bailout. At Ford, the most profitable of the three, workers face no such restriction. Yet rather than go to the strongest company first to set the pattern, as was long the union’s strategy in pre-concessions days, King is bargaining first with GM and Chrysler, with Ford talks on the back burner.

At the Labor Day parade, Ford worker Bill, who would not give a last name, shook his head dispiritedly, saying, “I don’t understand that.” He added that King “doesn't have much respect with the Ford people.” King brought a concessions reopener to Ford members two years ago, when he was the union’s VP in charge of Ford, and was voted down 3-1.

Ford activists polled by Labor Notes in August said co-workers are ready to vote “no” again on an inadequate contract—though there is not necessarily agreement on what that means. Traditional workers want a wage increase and cost-of-living restored; only some are as adamant about closing the gap for two-tier workers. All observers expect the companies to offer big signing bonuses to lessen the chance of a contract turn-down.

It’s also possible that Ford and UAW bargainers will head off a “no” vote by using settlement of a 2010 grievance to give Ford workers more money than their counterparts at GM and Chrysler. The union’s grievance claims Ford violated the contract’s “equality of sacrifice” clause by repaying concessions made by salaried workers and management while giving nothing to union members.

Combined with the differentials caused by profit-sharing, such a move would further undermine the concept and reality of a pattern agreement—designed by the union’s founders to “take wages out of competition.”

King has stated repeatedly that he wants evenhanded contracts that will not hurt the companies’ recovery, calling the union “a moderate, pragmatic and socially responsible player in the dialogue.”

Members have no expectation of getting back anywhere near what they’ve given up, even as top executives take home tens of millions in stock options. At GM and Chrysler, a “no” vote throws the contract to an arbitrator. With the sole exception of 2009, UAW members at the Detroit 3 are not in the habit of defying their bargainers and demanding more. Will they accept a deal that ties their pay to each company’s profits or, as management has trial-ballooned, to productivity, attendance, and quality?

For the results of Autoworker Caravan’s survey on the two-tier system, click here. For other dissident sites look here and here.

A version of this article appeared in Labor Notes #390, September 2011. Don't miss an issue, subscribe today.
Related
Before Your Strike Vote, Consider a Practice Strike Vote »
Frontier Strikes Get First Aid Kits Updated, Win Back Work »
Seattle Teachers End Week-Long Strike »
Wisconsin Nurses Set to Strike, As Employer Claims It's Banned from Bargaining »
'Milk Was Still Steaming, We Just Walked Out': Scenes from a Summer of Strikes in a South Carolina Starbucks »