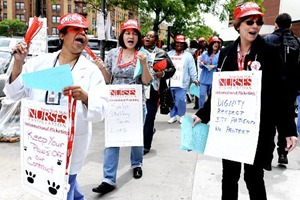 In an election that could further alter the fast-changing landscape of nurse unions, reformers in the New York State Nurses Association gained a big majority on the organization’s board of directors. Photo: Montefiore Union Nurses.

In an election that could further alter the fast-changing landscape of nurse unions, reformers in the New York State Nurses Association gained a big majority on the organization’s board of directors.

The victory—announced August 25 on NYSNA’s internal website—gives nine of the 13 board seats to members of the reform slate, known as New York Nurses for Staffing, Security and Strength. The union has 37,000 members.

The first challenge is ensuring the six new officers are installed at the union’s convention in late September. For years the reformers have faced extraordinary harassment from old-guard leaders, fighting off union disciplinary charges and retaliation. They’ve successfully sued to halt undemocratic election procedures, and to win the right to distribute handbills and express dissenting points of view. The reformers vow to use every means available to make sure the outgoing leadership respects their two-to-one election majority.

The reformers’ campaign channeled member dissatisfaction with both hospital management and top union leaders. The anger was fueled by the fact that 22,000 NYSNA members are currently working without a contract, and 14,000 will face higher premiums and co-pays September 1 after the union lost a major arbitration case this summer.

“People were feeling squeezed on the job, our benefit fund was threatened, and staffing levels that people had negotiated locally were being violated left and right,” said Judy Sheridan-Gonzalez, a current vice president and member of the reform slate.

“NYSNA hasn’t been able to impact the major issues that members are concerned about in the workplace, such as bullying, abuse, staffing, and nursing practice,” Sheridan-Gonzalez said.

“People voted for us because we’re going to fight for them,” said Pat Kane, a cardio-thoracic operating room nurse at Staten Island University Hospital and the newly elected treasurer. “They don’t see that with the current leadership.”

As a prime example, Kane pointed to the absence of a coordinated contract campaign for the many hospitals with expired agreements. “They lined up contract expirations for almost everyone in the benefit fund, but where was the show of strength?” Kane said.

The outgoing leaders were also hampered by ongoing tensions with NYSNA staffers, who threatened a walkout in May to force old-guard leaders to bargain with their newly reconstituted staff union.

The victory up-ends the longstanding balance of power inside NYSNA between bedside nurses and nurse executives and managers, who reformers contend are more aligned with hospital administrators than with those who provide hands-on patient care.

This tension has bubbled up in most statewide nursing organizations over the past 20 years, driving many to abandon the American Nurses Association. The 115-year-old professional association formulates standards for nursing practice, and opposed nurse unionism for years. ANA includes managers in its ranks and leadership.

Such divisions fueled the creation of National Nurses United (NNU) in 2009, bringing together unions in California, Massachusetts, Michigan, and Minnesota with the United Association of Nurses (UAN), formerly the union arm of the ANA.

NNU leaders say the ANA has historically fostered elitism among nurses and consistently undermined their top legislative priority, ratios enshrined in law that limit the number of patients per nurse.

But nine state nurse organizations, including New York’s, left the UAN. Leaders feared that the organization would come under the control of the California Nurses Association, whose members comprise more than half of the new national union.

Several of NYSNA’s newly elected leaders opposed the organization’s decision to sever ties with the UAN. It remains to be seen if they will push to realign the union’s national affiliations.

On policy questions, NYSNA’s new leaders are in agreement with the national nurse union. The winners called ratios “the most effective way to ensure patient safety at the bedside, as documented in study after study.”

The new leadership is sober about the challenges ahead: aggressive hospital administrators intent on trimming pay and benefits and jacking up workloads, budget battles that are tightening state and federal hospital reimbursements, and a long-disconnected membership. Only 7 percent voted in the August election, slightly more than in previous elections.

“It used to be you could do some clever stuff and win at the table,” Sheridan-Gonzalez said. “Those days are over. We have to be militant to get anywhere now. We have to let them know we have the numbers.”

Sheridan-Gonzalez pointed out that winning a strong contract is closely connected to building a more democratic union: “Our commitment as a group is to make NYSNA a democratic structure, where the members know what’s going on and where they decide how to fight back against the horrible things our employers are doing.

“You can’t do one without the other,” she said.

Related
Ballots Are Out in UAW Election, with Contrasting Visions of Unionism Up for Leadership »
After Strike Threat, Wisconsin Nurses Get a Possible Path to Union Recognition »
Wisconsin Nurses Set to Strike, As Employer Claims It's Banned from Bargaining »
Stung by Ascension's Union-Busting, Michigan Nurses Gird for Contract Battle »
A Nurse’s Story: My True Cost of the Pandemic »