Facing Consensus on Austerity This Labor Day, Is Labor Ready to Test Its Independence? 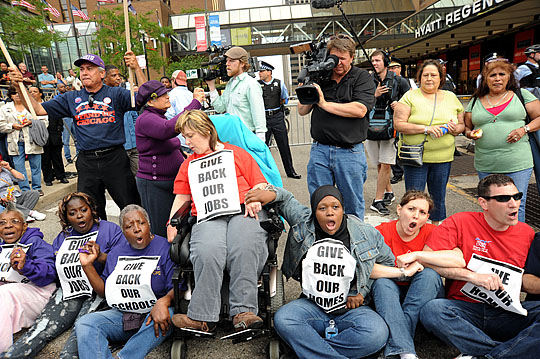 Thousands in Chicago protested a summit of Fortune 500 financial officers this summer and two dozen were arrested. Some unions are looking to launch high-profile battles over corporate taxes and swelling profits to break out of the austerity straitjacket. Photo: Stand Up Chicago.

Somehow the nation’s lawmakers are just catching wind of the summer’s worst economic headline—job growth is stuck in a ditch.

We’re still 6.8 million jobs short of pre-recession employment, but in Washington alarm bells aren’t ringing over the jobs crisis. Congress has been fixated on the debt and the deficit instead, with a bad case of austerity fever.

Some exasperated labor leaders are making tentative noises about turning their backs on Democrats. Some are refocusing on state and local fights rather than the national level, punishing unreliable Dems and rewarding those who walk the union walk.

Others are looking to launch high-profile battles over corporate taxes and swelling Wall Street profits, as a means to change the common thinking about our economic ills and how to break out of the austerity straitjacket.

Even before the ink was dry on the debt ceiling accord, President Obama met with the AFL-CIO’s Executive Council, defending the deal and his two-and-a-half year record in office. But Obama’s tepid pledge to defend workers and unions against conservative attacks did little to quell labor’s frustration with Democratic politicians.

Twelve building trades unions have said they will boycott the Democratic convention where Obama will be re-nominated, in right-to-work North Carolina.

And AFL-CIO President Richard Trumka is issuing regular rumblings about labor’s “political independence.” He told a nurses gathering in June, “For too long, we’ve been left after Election Day holding a canceled check, waving it about—‘Remember us?’ Well, I don’t know about you, but I’ve had a snootful of that shit!”

Austerity fever was at its height in this summer’s three-ring circus over whether to raise the nation’s debt ceiling.

The months-long showdown was a complete victory for Republicans, and conservatives don’t know what to crow about first. Not only did they manufacture a political crisis, attaching their slash-and-burn legislative agenda to what should have been a ho-hum bureaucratic vote. (The debt ceiling has been raised 73 times since 1940; it only became a political football after Republicans swept into Congress in 1994.)

Bolstered by Tea Party hard-liners, they engineered the first major deficit reduction deal composed entirely of cuts, with not a single tax increase in the package. Republicans correctly calculated that with time running out, Democrats would back down, sparing both parties’ millionaire backers any pain and leaving glaring loopholes untouched.

The deal will make $1 trillion in cuts over the next decade, and spending caps will force federal programs of all sorts to shrink year by year. Worse yet, it empowers a 12-legislator “Super Committee” to find another $1.5 trillion in cuts by Thanksgiving.

After President Obama put in play the once unthinkable—cuts to Social Security and Medicare—attacking these bedrock old-age programs became part of the conventional wisdom. His move almost guarantees the new “Gang of 12” will come after these pillars of the New Deal.

Of course, tough talk from labor’s top brass in a non-election year is about as predictable as their eventual return to the Democratic fold once campaign season arrives.

But after decades of disappointment, some unions may be moving beyond strong statements. The Firefighters announced in April they were suspending political contributions to all federal candidates and redirecting resources to state and local battles in Wisconsin, Ohio, Michigan, and elsewhere.

New Jersey’s public sector unions are following through on their pledge to punish state legislators who didn’t stand up to attacks on collective bargaining. “We turned off the spigots during the budget fight,” said Ken McNamara, president of 10,000-member CWA Local 1037.

McNamara’s local, along with teachers and other state workers, led a bruising internal battle in early August to deny AFL-CIO endorsements and financial support to several politicians who supported a springtime measure that sharply increased state employees’ pension contributions and health care premiums.

Democratic Senate President Stephen Sweeney, an organizer for the Iron Workers, and Donald Norcross, an electrician who heads up the Southern New Jersey Central Labor Council, were two heavyweights denied an endorsement.

“We’ve been burned enough,” McNamara said. “It’s a real problem for us when supposed labor leaders are the ones doing this to us. To see us going after our own sets the tone.”

McNamara emphasized that his local will be working hard for (and funding) politicians that supported public sector unions during the recent health care and pension battles. He also said the local will be exposing the lucrative behind-the-scenes deals that have enriched many of the state’s top political fundraisers and operators while draining state coffers.

“Enough with beating up on the puppet,” McNamara said. “Let’s go after the puppeteer.”

But McNamara acknowledged that more was needed to change the political balance of power and the common sense about what government needs to do, in New Jersey and nationwide. “Corporations own both parties now,” he said. “People know it, but nobody is saying it.”

This logic has led the Service Employees union, with its “Fight for a Fair Economy” program, and NNU with its “Main Street Contract for America,” to take a portion of their political action outside the legislative corridors and instead target the banks and corporate giants at the root of our economic misery.

Both campaigns are premised on the belief that a broad community-labor campaign—fusing a healthy dose of action in the streets with a willingness to break the rules—can turn an uncomfortable spotlight on those who’ve benefited the most from the nation’s upside-down economic priorities.

Whether it’s occupying a Bank of America branch with demonstrators or stopping the eviction of foreclosure victims, these actions ultimately aim to build a public consensus about the need to break with austerity—and give politicians the political will to do so. Some unionists take a long-term view, recognizing they won’t likely see big results in 2012.

One key laboratory putting this theory to the test will be Chicago, where dozens of unions and community allies—including SEIU, the United Electrical Workers, the Chicago Teachers Union, Jobs with Justice, and others—are gathering under the “Stand Up Chicago” umbrella.

Using a mix of in-your-face tactics and tongue-in-cheek humor, they are targeting bailed-out banks and corporate tax dodgers, who they argue are siphoning money away from schools, hampering job creation, and worsening the city’s foreclosure crisis.

On August 15 organizers hosted a people’s putt-putt tournament in downtown Chicago, contrasting it with a $500-a-person Chamber of Commerce golf tournament the same day. Earlier this summer thousands protested a summit of Fortune 500 financial officers, and two dozen union activists were arrested.

They’re facing off with Rahm Emanuel, the new mayor and Obama’s former chief of staff, who is bent on carrying out the national austerity program in his hometown. Emanuel’s starting point is a corporate-inspired overhaul of the city’s schools, which has put 34,000 teachers—and the newly elected reformers in the Chicago Teachers Union—in the mayor’s crosshairs.

Still, most unions will undoubtedly feel compelled to pull out the stops for Obama and for most Democrats next year. Their appeals to activate members will be based on (justified) fear of the right rather than on enthusiasm for the Dems.

In 2008 unions mustered lots of troops because so many people found Obama inspiring and hungered for the change he promised. Now that they know he’s made peace with austerity, will fear be enough?

Hello there! I, unfortunately, can whole heartedly identify with those who've been burned by Washington, the Labor top brass and by those who stand against unions. As a personal injury lawyer from Dallas I've seen countless cases between the little guy and the big corporation. And let me tell you how many times the "at will" employment state sides with the business.

For those that don't know, I'm from a state that houses some of the world's largest corporations. Time and again I've seen union folks put out of their jobs because the focus wasn't local. That's the key here. Making a stand for labor requires large amounts of resources focused on a community, not the national stage (maybe some funding but not all). My two cents.