Building a Coalition from the Grassroots 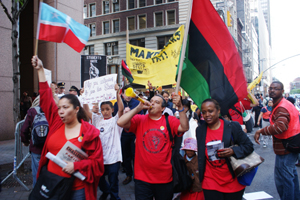 New York City is a tough town for teachers and education advocates. Mayor Mike Bloomberg, who controls the public schools, is a corporate operator with a privatization agenda. The city’s United Federation of Teachers (UFT), with 120,000 active members, offers meager resistance to budget cuts and the deterioration of teaching conditions.

Yet teachers at Leon Goldstein High School in south Brooklyn have worked to create a coalition that has energized teachers, parents, and other unionists facing cuts. Their experience emphasizes that rank and filers don’t have to wait for union officials to lead the charge.

The project’s initiator, social studies teacher Kit Wainer, said, “Our approach was to try to launch the kind of organizing project the unions should be doing on a much larger scale.”

In the latest round of budget cuts, Goldstein lost some of its advanced placement classes and most after-school activity, including tutoring. Worse, the school expects to lose nearly $300,000 more from next year’s budget.

In response, the school’s teacher, parent, and student leaders formed an ad hoc budget restoration committee, which organized a protest last December and got 1,000 petition signatures against the cuts.

“We decided we needed to move beyond the school level,” Wainer said. The committee reached out to chapter leaders (the union chief at each school) and Parents Association leaders in 80 schools across south Brooklyn.

The outreach wasn’t easy, since the committee had few names or contact information. The UFT wasn’t officially involved at this point. The Parents Association was no better off. Their district-wide coordinating body was barely functional.

The committee sent a generic letter to each school: “Dear UFT Chapter Leader,” or “Dear PA President.” The letter invited them to work together against budget cuts and announced a March 10 meeting.

Wainer added that he had a dozen teachers phonebank. “If we didn’t have names, we would leave messages for ‘the UFT chapter leader,’” he said.

The March 10 meeting had a modest turnout, but succeeded in hooking up rank-and-file leaders who had never worked together before. Also, the UFT district representative attended the meeting at Wainer’s invitation. The rep backed the new coalition, encouraging chapter leaders to get involved in a protest planned for May 6.

The union’s official support was significant because the coalition had been launched by an opposition leader. Wainer has long been active with the rank-and-file caucus Teachers for a Just Contract and was its presidential candidate in 2007. TJC remains a sharp critic of UFT leadership. Why would the UFT authorize its representative to cooperate?

Wainer had deliberately pursued the coalition as a non-oppositional activity. And UFT was happy to see the group target a state senator, a Republican who the union believed was politically vulnerable.

Wainer said the UFT support made a difference: “To be able to put the UFT logo on the flier really helps. To have the plug coming from the district rep really helps. It puts a stamp of legitimacy.”

The district representatives sent fliers to every chapter leader in Brooklyn and talked up the protest at a Brooklyn-wide union meeting. About 200 people attended, picketing outside the office of the state senator, who had voted the wrong way on school cuts.

Younger teachers walked around the crowd with clipboards, collecting contact information and spurring interest in ongoing work against the cuts.

ACROSS THE UNION UNIVERSE

As the group built toward the protest, one teacher, Mike, suggested reaching out to rank and filers in other unions.

Mike’s brother works at the power company, so he was invited to address a membership meeting of the power workers’ local, which endorsed the action. The activists produced a new leaflet with both union logos. The power union advertised the rally, and sent several members, including top leaders.

After the rally, the coalition broadened its cross-union outreach. The mayor had proposed cutting 20 firehouses (along with 4,200 teachers). Teachers with firefighter friends and family dug for names and numbers of their union delegates and invited them to a follow-up meeting. Two teachers spoke at 20 firehouses, getting hugs and high fives wherever they went.

By this time the UFT and other city unions had launched some actions to protest the cuts. The UFT was a prime builder of the May 12 march from City Hall through Wall Street which drew tens of thousands.

The biggest boost to the Brooklyn organizers came on June 2, when half the student body at Goldstein High staged a walkout to protest the budget cuts. None of the faculty had organized the walkout—even tenured teachers can be fired for doing so.

But student organizers said the teachers’ actions had created a buzz among students about what the budget cuts would do to their school. The students had seen the picket lines before school in two earlier protests, and seeing teachers take action helped legitimize protest in their minds.

At the chosen moment, student organizers appeared together to distribute leaflets urging students to walk out. Student marshals kept the protesters walking along the sidewalk.

After an hour, police arrived and threatened to arrest everyone. The organizers led a march back inside, chanting slogans against budget cuts.

The teacher-parent coalition is contemplating two actions for the fall. A march could stretch from one facility facing cuts to another, maybe from a transit depot to a firehouse or school.

Another idea is a teach-in on budget cuts and the attacks on unions and communities, targeting high school and community college students but looking for transit workers and firefighters as well.

Electoral work is always a major part of UFT strategy, Wainer says. But he thinks labor “should encourage this kind of bottom-up activity as a way of rebuilding union solidarity and combating budget cuts more effectively.”

A version of this article appeared in Labor Notes #390, September 2011. Don't miss an issue, subscribe today.
Related
Staten Island Amazon Workers Vote on a Union »
Minneapolis Strikers Demand a Living Wage for the Lowest-Paid Educators »
Richmond Educators Are First In Virginia to Win Bargaining Rights »
Twin Cities Teachers and School Employees Gear Up for Strike »
As Omicron Rages, Teachers and Students Fight for Safety Measures in Chicago and Elsewhere »