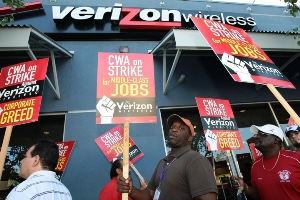 Supporters of the Verizon strikers, including nurses and other unionists, picket a Verizon wireless store in Burbank, California. Photo: Slobodan Dimitrov.

Noisy picket lines are turning away customers at Verizon’s wireless stores as the largest strike in the country weathered a rainy second week. Some service was disrupted throughout the Northeast though the scale of the outages was hard to define.

The strike covers 45,000 members of the Communications Workers (CWA) and Electrical Workers (IBEW) from Massachusetts to Virginia. Verizon wants to eliminate pensions and job security, as well as limit raises and force big health care costs onto current workers and retirees.

On the eve of the strike, Verizon announced it would pay a special $10 billion dividend to shareholders. At the same time, its negotiators were pushing for $1 billion in concessions from workers.
The company has made $3 billion already this year, and nearly $20 billion in the last four years.

Verizon announced it would end strikers’ health insurance on August 31. Asked if members had the reaction management hoped for—fear—CWA Local 1400 President Don Trementozzi said, “Not yet. People are pretty fired up. This is the most successful mobilization strike CWA or IBEW has ever experienced. Members’ involvement has been unbelievable.”

CWA has promised to help strikers with medical needs through its defense fund, either by paying monthly premiums through COBRA or by paying for health care services “as needed.”

In addition, it’s possible members could be back on the job before the August 31 deadline. Trementozzi said CWA had said since the beginning that once negotiators saw movement at the bargaining table, members would go back to work, rather than staying out till a definitive agreement is reached.

Meanwhile, his members, who are residential service reps and clerical workers, are flocking to help out at the union hall, even though for many who live in Massachusetts, it’s a long drive up to New Hampshire.

“A lot of my people are so angry at Verizon for how they’ve been treated over the last couple of years, how conditions have deteriorated,” Trementozzi said. “They are holding their own.”

Even in a precarious economy with 9.1 percent unemployment, only 400 of the 45,000 strikers have crossed picket lines, CWA President Larry Cohen reported.

The unions call the strike a defense of stable, decent jobs. They point out that besides pensions and health insurance, the company wants to attack sick leave and disability—while it has shipped tens of thousands of jobs overseas and paid no federal taxes in 2009-10. In fact, Verizon actually claimed a $1.3 billion tax refund.

Yesterday a thousand red-shirted New Yorkers rallied loudly near Verizon headquarters, and 200 overflowed a hearing on the New York City Department of Education’s renewal of a $120 million contract with Verizon for school phones and internet.

The mayor-controlled panel voted up the deal 9-4 but not before members were blasted from the microphones by strikers and supporters for enabling union-busting. “Shame!” yelled the crowd after the vote.

Verizon has tried to drive a wedge between union members and the millions who are just hanging on in the fragile economy. The company has claimed that some union workers make $150,000 per year in wages and benefits. “Are you kidding me?” asked James Stone, a CWA Local 1101 member. “I’d be in Saint-Tropez, not on a picket line.”

Justin Harrison, a unit secretary in Pennsylvania’s CWA Local 13000, said only a few techs with high seniority could earn close to Verizon’s “average”—and only if they sucked up hundreds of hours of overtime. “Your family wouldn’t know what you looked like,” he said. “You’d kill yourself.”

Verizon’s concession demands would funnel millions out of workers’ pockets and send it up the income ladder to top execs—who already took a quarter of a billion dollars in compensation in the last four years.

“We can never end this recession by cutting the wages of workers,” Cohen said.

Jimmy Tarlau, a CWA staff rep covering Virginia to Pennsylvania, said 15 picketers were arrested in the first week for blocking strikebreakers’ access to buildings and trucks. The arrests are spontaneous and not coordinated, Tarlau said.

Verizon has secured several injunctions limiting the number of picketers in front of offices, stores, and mobile work locations.

CWA attorney Gay Semel said that to win an injunction the company needed to claim that police can’t protect Verizon scabs and property, and that the company produced 20 instances of alleged violence.
While courts are no friend of the worker, Semel added, she called these injunctions among the least restrictive she’s seen.

The company claims disgruntled strikers have cut wires, including a fiber-optic cable in upstate New York that served hundreds of thousands of customers.

Members point out that rain harms wires (and downpours have soaked the East Coast recently), while an exec from a fiber-cable provider admitted that squirrels have a strange fondness for chewing through lines.

Whatever the cause, the telecom network is feeling some impact. A premier Manhattan grocer posted signs Monday insisting on cash purchases since the Verizon service fueling its debit transactions had failed.

Supportive Verizon managers are telling strikers that the company has cancelled all fiber-optic installations for a month. Verizon spokesman Ray McConville declined to confirm that but said, “The focus has been on repair.”

The Pennsylvania injunction says one side’s lawyer must notify the other side’s lawyer of any alleged violation, which starts a 10-day clock to resolve the issue before law enforcement is involved. But some sheriffs, tired of fielding calls all day from managers irritated by mobile pickets, are just locking up strikers.

“From our point of view, the sheriff is overinterpreting the injunction, and the company is violating it,” Harrison said.

The union dispatched its negotiators back to the table, where Verizon has submitted new proposals that the union was evaluating yesterday. Verizon removed its proposal that attached wage increases to management-determined productivity measures this week, but union officials say the company is still stalling. They filed charges saying so with the labor board.

The last I read today, It looks like they are going back to work under the old contract.