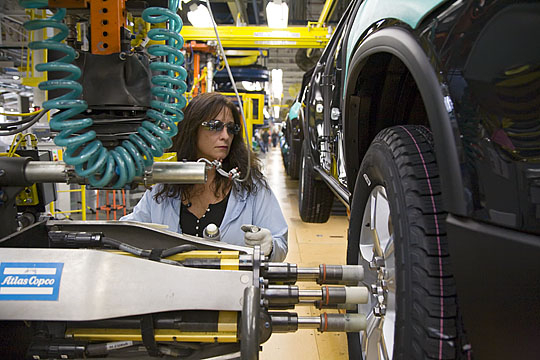 Inside a General Motors plant in Lansing, Michigan. Within five years certain Southern U.S. states will be among the cheapest manufacturing locations in the developed world—and competitive with far-away China. Photo: Jim West

Jokes about the U.S. becoming “Europe’s Mexico” are commonplace, but now high-priced consultants are pushing the notion in all seriousness.

They’re predicting that within five years certain Southern U.S. states will be among the cheapest manufacturing locations in the developed world—and competitive with China.

For years advisers like the Boston Consulting Group got paid big bucks to tell their clients to produce in China. Now, they say, rising wages there, fueled by worker unrest, and low wages in Mississippi, Alabama, and South Carolina mean that soon it won’t be worth the hassle of locating overseas.

Wages for China’s factory workers certainly aren’t going to rise to U.S. levels soon. BCG estimates they will be 17 percent of the projected U.S. manufacturing average—$26 an hour for wages and benefits—by 2015.

But because American workers have higher productivity, and since rising fuel prices are making it even more expensive to ship goods half way around the world, costs in the two countries are converging fast.

Dan Luria, research director of the Michigan Manufacturing Technology Center, says many of the big-name consultancies, which until a year ago were advising their clients to “Asiafy their footprints,” are now telling companies to think twice.

That’s before you figure in shipping, duties, and possible quality issues. Add it all up, says BCG, and “China will no longer be the default low-cost manufacturing location.”

Actually, employers deciding where to produce the next generation of widgets may not need to look to the South. Plenty of factory jobs in Northern states—even in the former high-wage stronghold of auto—are already “competitive.”

Ford’s flagship Dearborn Truck plant outside Detroit, for example, contracts non-union workers to do inspection and repairs—long the coveted jobs, that workers could get only with many years’ seniority—at $10 an hour with no benefits.

That’s more than the Chinese average now, but less than what’s projected for 2015.

Brad Duncan, who worked at the plant last year, said it seemed like dozens of small companies were involved. Many pay people as “independent contractors,” he said, and are essentially fly-by-night operations.

“I worked for 10 bucks an hour with no overtime for around 66 hours a week,” Duncan said. “Then I’d get laid off for a week or more at a time with no notice.”

At a GM plant in Lake Orion, Michigan, north of Detroit, contractors hire young third-tier workers at $10 an hour or less to gather parts for assemblers, work done very recently by GM employees.

These kids are union members, though they don’t have a contract yet. The United Auto Workers convinced the contractors to let them organize the workforce through card check.

“There are more people there handling parts than building cars,” said Dan Theisen, a plant electrician.

Many of the union assemblers are themselves second-tier workers paid less than the U.S. manufacturing average, with wages of $14.60 and no pensions.

“It makes it hard to do anything for the second tier when the third tier is so bad,” said Theisen, a dissident who’s spoken against lowering GM wages.

Among the U.S. companies rethinking their production locations are Ford, Caterpillar, an ATM company building a plant in Georgia, and Wham-O Inc., which returned Frisbee production to California and Michigan.

Master Lock is bringing work back to Milwaukee from China. GE, enticed by federal stimulus money, will be making green refrigerators in Indiana with Electrical Workers (IBEW) members instead of in Mexico.

And Suarez Manufacturing Industries has been lauded for relocating production of a space heater from China to North Canton, Ohio.

After experiencing lengthy transit times from Asia, CEO and North Canton native Ben Suarez painstakingly put together a chain of suppliers from within the U.S. In a former IBEW Hoover vacuum factory, abandoned in 2007 in favor of Mexico, he’s now contracted with two companies to supply the plant with labor.

The plant will soon employ 100-150 workers in full-time jobs. As production ramps up, others will be guaranteed seasonal work, October through March. The plant received 3,000 applications, according to the company’s Lauren Capo.

The Steelworkers union has long agitated for a manufacturing renaissance in the United States, arguing that an economy that doesn’t make things is weak and unsustainable. In 2007 the union initiated the Alliance for American Manufacturing, a partnership with employers.

AAM Executive Director Scott Paul says there’s no hard evidence yet that manufacturers are actually returning from China in enough numbers to constitute a trend.

Rather, various consultants are now telling their clients to consider the U.S. They’re the same consulting class that “popped up around the time of NAFTA with ‘yes you can in Yucatan,’” he said.

Paul cites the factors that could converge to bring more work to these shores:

But, Paul notes, if companies choose to build in the lowest-cost states—as Japanese automakers have done for nearly 30 years—“it quickly becomes a state vs. state competition, a race to the bottom. If South Carolina can offer lower wages, so can Mexico.”

WHAT KIND OF JOBS?

Will factory jobs flood into Michigan and Mississippi at just above minimum wage? Or is that still not cheap enough? The fact remains that the decisions are all made by corporations seeking the greatest profit in a dog-eat-dog world.

As Michael Zinser, one of the co-authors of the BCG report, told Labor Notes, “Location is agnostic. It’s a question of what the market will bear.”

Luria predicts that some manufacturers will indeed leave China, but sees the moves mainly benefiting Mexico and Eastern Europe.

Paul, from the manufacturing alliance, wants to see the government step in and influence those location decisions through government policy, as it did with the domestic content requirements in the 2009 Recovery Act and the high-speed rail bill. The German multinational Siemens located a train factory in Sacramento, California, as a result, he said.

Likewise, clean energy loans, grants, and tax credits led to 18 new advanced battery factories in Michigan (though not at high wages). “None of this would be possible without public investment,” Paul said.

Mostly, of course, the Obama administration has taken a hands-off approach to what business should do, instead providing cash on request in the bank and auto bailouts.

UAW dissidents said the auto bailout was a giant missed opportunity to steer their industry toward clean products built in the U.S. at decent wages. Unions and consumer groups protested because the banks were saved but stiff regulations were not attached to their checks.

Paul notes that government policies to promote industry are the norm elsewhere, in old capitalist countries as well as in new ones like China. He fears the absence of such government help leaves U.S. workers with only one bargaining chip—and that’s not a happy one.

“Low wages won’t be the factor that compels companies to locate in the U.S.,” he said.

“But absent a national economic development strategy where there is a focus on manufacturing, that’s what we’re left with.”