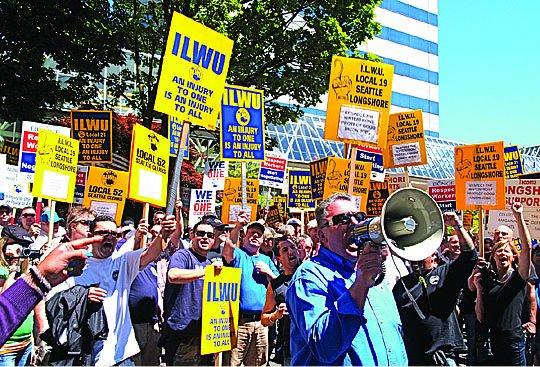 Revving up for July actions at the worksite, 1,000 Longshore union members from up and down the West Coast rallied June 3 at EGT headquarters in Portland, Oregon. They are determined to prevent the anti-union company from moving grain without their members. Photo: ILWU.

Hundreds of West Coast longshore workers blocked a train in July and more than a hundred have been arrested in a remarkable campaign of civil disobedience. They seek to prevent an anti-union company from moving grain through a Columbia River port.

EGT Development wants to operate its new $200 million facility in Longview, Washington, using non-longshore labor. It’s the first new grain export terminal built in the Pacific Northwest in almost 30 years, and the first since 1936 that’s attempted to operate without the Longshore union (ILWU).

North American corn, wheat, and soybeans, stored in dockside elevators, will be loaded onto boats at Longview, destined for booming Asian countries.

A series of vigorous protests by ILWU Local 21 have confronted EGT, an amalgam of a Japanese company, a Korean shipper, and the St. Louis-based agribusiness giant Bunge North America, which earned a $2.5 billion profit last year.

Members have used a pickup truck to tear down a fence and then occupy the grain terminal. About 100 union members, including leaders, were arrested for criminal trespassing.

Dan Coffman, Local 21 president, called the blockade a “wildcat.” The day his members saw grain pouring out of a train, during the terminal’s testing phase, he said, “they went nuts.”

Members of Local 21 joined with 600 community supporters and other longshore workers from throughout the Northwest after midnight on July 11 to flood the train tracks into the port with protesters. The Burlington Northern Santa Fe turned away its mile-long grain-filled train and has suspended train traffic to the terminal since that date.

Two weeks later, a protester in a hang-glider flew over the port to drop leaflets.

Animated picket lines have confronted non-ILWU workers on their way into the port, leading to seven more arrests. Round-the-clock picket lines maintain a presence at the terminal’s gate, although the local has halted its attempts to block EGT workers.

The local has enjoyed good relations with the county sheriff, who told the local paper, “Bless their hearts. These are our neighbors.”

EGT started the fight by suing the Port of Longview to void the stipulation in its lease that requires EGT to hire Local 21 members. The union and the port are jointly seeking a summary judgment from a judge in September to tell EGT to abide by the contract.

But leaders aren’t placing their bets on the lawsuit, which is before a Bush-appointed federal judge. Court proceedings could drag on for years. The battle will be won in the streets and in the community, Coffman said.

“Labor has always faced this—the laws and rules were made for them, not us,” he added.

Besides inviting the community to its rallies, the local has distributed hundreds of signs that sit in the windows of local businesses and on lawns throughout town. “People remember that we gave $33,000 to the women’s shelter last year,” Coffman said. “They know we sponsored the Little League. They know who lives here and supports this community.”

In the meantime, EGT has broken off negotiations with the ILWU and is running tests of its terminal ahead of the busy fall harvest—as if it had already won the lawsuit.

“They have attempted to leverage the community and the unions in a very cynical way,” said Lynne Dodson, secretary-treasurer of the Washington State Labor Council. “They’re a bad seed.”

At stake for 200-member Local 21 are about 50 jobs and a foot in the door for other union-busters.

“This is a fight for collective bargaining rights. If this goes the way EGT wants it to go, all the other elevators are going to want the same deal,” Coffman said.

The union initially negotiated with EGT but refused a demand that members work 12-hour shifts at straight-time pay. The company claimed it would cost $1 million more annually to run the terminal with ILWU labor, but has since admitted the figure was concocted.

EGT then expressed interest in operating non-union but instead contracted the work to a company organized by Operating Engineers (IUOE) Local 701, just across the border in Oregon. In a news release, IUOE expressed no aversion to raiding another union’s jobs.

But the president of the Tacoma, Washington-based IUOE local told Longview’s Daily News that the EGT terminal is out of his jurisdiction, and his local would not take other unions’ work.

Nelda Wilson, assistant to the business manager of Local 701, told the Northwest Labor Press that IUOE wasn’t able to tell its side of the story. “It’s a very complicated issue, and there is a lot of disinformation going around,” Wilson said. “There is a legal process that has to wind its way through the courts. I think we all need to calm down and allow time to sort out the facts here.”

“This is much bigger than Longview,” said Scott Mason, president of ILWU Local 23 in Tacoma. He added that no one should be fooled by the “ruse [EGT is] putting on, saying they got another union in there. It’s a mask to hide their ultimate goal to have no union.”

EGT sold the project to Longview based on the benefits it would provide the community: 200 jobs for two years of construction, and 50 union jobs at the elevator.

The employment bump was smaller than expected, but the project still represented the community’s biggest development in years. With bigger belts and faster pouring, Coffman says, the new terminal would trim the workforce by 40 percent compared to similar grain elevators.

But the company imported out-of-state workers and disregarded the port’s Project Labor Agreement from day one, Dodson said. License plates from right-to-work states appeared in the parking lot, and 150 workers from Guatemala were brought in to pour cement.

Coffman says the ILWU urged the Operating Engineers and other building trades workers to “do what they needed to” in order to force EGT to respect the agreement and hire union construction workers from the community. The trades declined, he said.

Coffman noted that his local had honored Local 701’s picket line in 2006 when the Operating Engineers protested the use of non-union crane operators. The IUOE won the work the next day.

In the ILWU’s eyes, EGT’s actions amount to a declaration of war. Success for the company would create an opening for other employers to hire outside the union. Every other major grain terminal on the West Coast is under ILWU contract.

EGT is breaking its contract in order to avoid Longshore labor—yet Local 21 must turn to civil disobedience to protect its members’ jobs.

Dockers on the East Coast have had to use aggressive action to defend their jobs, too. Longshore workers shut the mammoth New York-New Jersey port for two days last September, honoring a picket line erected by Longshoremen (ILA) from Philadelphia. The Philly dockers brought the picket line to New York and Baltimore to protest the Del Monte fruit company’s decision to move its banana-and-pineapple importing operation to a non-ILA pier.

Asked how the ILWU decided on the militant tactics, Mason said, “Tearing a fence down to throw a scab out, that doesn’t sound very militant to me. It might be militant by today’s standards, but maybe that’s because the politics of the country have changed so much.”

“Sometimes there are places trains shouldn’t be going, and people standing together are pretty effective at that,” Dodson said. “There are a lot of last straws being reached right now. If you can undercut longstanding agreements and standards, where does it stop?”

More actions can be expected. Coffman said the ILWU will do whatever is necessary to make sure longshore jobs are preserved at all grain elevators in the Northwest.

Evan Rohar is a former casual worker at the Port of Tacoma.

A version of this article appeared in Labor Notes #390, September 2011. Don't miss an issue, subscribe today.
Related
The Supply Chain Disruption Arrives ‘Just in Time’ »
Bottom-Up Labor Solidarity for Palestine Is Growing »
Insatiable Shipping Companies Set the Table for the Suez Canal Ship Debacle »
Viewpoint: As the West Coast Burns, We Don’t Need Unity. We Need to Point the Finger at Those Responsible »
‘We Believe in Ferries’: Alaskan Ferry Workers Walk Off the Job »