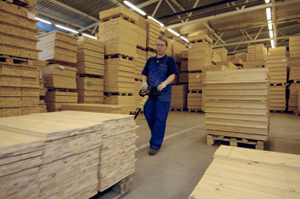 A years-long campaign won a union last week at the only Ikea furniture plant in the U.S., part of the same Swedwood manufacturing arm as this Russian factory. The win showed the promise of linking unions across borders to pressure European owners. Photo: Alamy/ITAR-TASS.

Union organizing won back the weekend for Tawanda Tarpley and her co-workers at an Ikea-owned furniture plant in Danville, Virginia.

Mandatory overtime at the Swedish-owned plant meant that last year she worked for three months without a single day off. The union raised such a stink about the mandatory overtime that curious Swedish journalists turned up in Virginia.

After scathing articles about conditions in the Swedwood plant appeared overseas, union woodworkers in Europe and Asia pressured the iconic Swedish brand.

Even Jon Stewart’s satirical “Daily Show” made an appearance, picking up a line from Machinists union organizer Bill Street, who painted the situation in Danville as an example of the U.S. turning into “Europe’s Mexico.”

“We were fed up with wages, safety concerns, overall communication. We want to be treated with respect,” Tarpley said, adding that once, an angry supervisor threw a board at a co-worker.

IAM says Danville’s plant is the most dangerous furniture factory in the U.S., with 1,536 days lost from work due to injury since 2007.

OSHA fined the plant $13,500 for lying about its accident rates and hiding eight serious injuries.

Last year the company dropped pay all over the Swedwood plant. In the shipping department, starting pay went from $9.75 to $8 an hour.

Until the union drive goaded managers into making changes, nearly a third of the workforce was hired through a temporary agency. That changed, Tarpley said, “by us making it an issue—we wanted to have the front office hire some of them.”

They were successful in getting most of the temps hired permanently. Some had worked in the plant for years.

The working conditions in Danville are quite a contrast with Ikea’s unionized factories in Sweden, where starting workers make $19 hour and receive five weeks’ paid vacation.

The Ikea workers loathe their humiliating discipline system. If a worker accumulates nine points, he or she is fired.

Going to the restroom without permission costs a point. When Tarpley’s son was hit by a car, she had to leave early to go to the emergency room. She earned a half point. There’s no appealing it, she said.

A man collapsed from heat exhaustion during the recent heat wave (workers said the factory reaches 102 degrees inside). He was carried out on a stretcher—and assessed a point.

“It’s the most strict place I have ever worked," 63-year-old Janis Wilborne told the Los Angeles Times. Like many workers in Danville, she left the job in disgust.

The mandatory overtime drove many away. "I need money as bad as anybody, but I also need a life," Kylette Duncan told the paper. She left for a lower-paying retail job.

Workers say there is no formal training in the plant. They are taught by other workers who may have been there only a few weeks, who in turn were taught by untrained co-workers. “Nobody really knows what they’re doing,” said Tarpley.

Workers also complain of favoritism. Managers will hire family members and then quickly promote them over long-time workers, she said.

Black workers charged they get worse shifts and are passed over for promotions. Six claims are pending against the company for racial discrimination.

Ikea markets itself as a corporation that raises labor standards all along its supply chain through its corporate ethics policy.

Street, who is head of the Machinists Woodworking Department, said he initially hoped such self-promotion would lead Ikea to set a higher standard at its only U.S. plant—and not fight the union.

But most European-owned companies, despite the strength of unions in their home countries, have been fiercely anti-union here. The Auto Workers have unsuccessfully pursued German-owned Volkswagen, lately focusing on a new plant in Chattanooga, Tennessee, where the Passat is built.

The Communication Workers have attempted to use the leverage of solidarity with their unionized German counterparts at Deutsche Telekom to organize its U.S. subsidiary T-Mobile, but the company has been extremely resistant. CWA’s first success came two weeks ago when a small unit in Connecticut voted union, concerned about a proposed merger with AT&T.

The French-owned food services company Sodexo has been the focus of an international campaign by the Service Employees, who want the company to recognize the union if a majority of workers sign on. Only after years of international campaigning have they been able to get a union at some U.S. colleges.

In Danville, the union reached out to Ikea union workers in Sweden and other countries. The president of the Swedish woodworkers union and the general secretary of the Building and Woodworkers International (BWI) federation traveled to Virginia, but were not allowed in the plant.

After repeated phone calls to Ikea management in Sweden, they were finally hustled through the plant, but weren’t allowed to interact with workers. U.S. union representatives were completely excluded.

After that experience, BWI took on the Danville union effort as an international campaign, calling for a boycott, sponsoring protests from Germany to Hong Kong, and at one point clogging Ikea corporate inboxes with 100,000 emails. BWI has member unions in 127 countries.

After two years of discussions with Ikea, Street said, it was clear its corporate ethics policy was a dead letter in right-to-work Virginia. The union would “have to win this old-school.”

“They love the union when they don’t have a choice, but they don’t love us so much when they do,” said Street, assessing U.S. unions’ experience with European brands.

A CALL FROM SWEDEN

Swedwood responded to the drive by hiring the high-profile union-busting law firm Jackson Lewis. Mandatory anti-union meetings followed. Supervisors prowled the floor interrogating workers. Rumors flew that the plant would close. Bonuses were hinted if the vote went against the union.

When two union supporters stood up in the management meetings and spoke out for the union, they were demoted and later fired.

Tarpley estimated that 10 workers were fired for union activity overall in her three years at the plant, which opened in 2007.

But all the international pressure may have had an effect, said Street. He’s almost certain that a call came from Ikea headquarters in the last few weeks telling Swedwood management to tone down the anti-union drive.

“They could’ve fought dirtier,” Street said, adding that U.S. law, notoriously tilted toward employers, “allows them to do more than they did.”

Related
A New Union, At Last? Mexican Auto Parts Workers Get to Vote, Three Years After Strike Wave »
How Lobstermen Formed a Union Co-op to Claw Back Fair Prices »
In a Landslide Victory, Mexican GM Workers Vote In an Independent Union »
Labor Must Rise Against Vaccine Apartheid »
Teamsters United Takes the Wheel »