Why Connecticut Workers Said ‘No Concessions’ 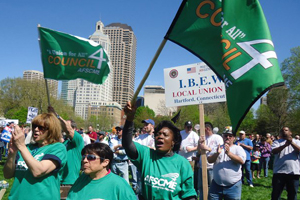 A majority of Connecticut residents thought state workers were making their fair share of financial sacrifices. Photo: Campaign for the Middle Class.

When Connecticut state employees voted down concessions in late June, they touched off a firestorm of criticism from the state’s political establishment and the media. Conservative lawmakers and opinion writers painted the vote as an example of selfish—even clueless—union members holding tight to outsized benefits, a move that deserved public scorn and an uncompromising push for layoffs from state officials.

The truth, of course, is more complicated. It’s a fact that the proposed givebacks were not as severe as those in some other states, such as Wisconsin or California. It’s also true that 57 percent of union members voting cast a ballot in favor of the takeaways.

But claims of an outraged public were overblown. A June 15 Quinnipac University poll found that 56 percent of Connecticut residents thought state workers were making their fair share, or more, of financial sacrifices to help balance the budget.

Those voting against the agreement had a number of motives for saying no:

Add in the union coalition’s high bar for ratification, and conditions produced a contract rejection that prompted Malloy to announce layoffs of 6,500 state workers in early July.

Despite many elements unique to Connecticut, the danger is that workers there could become the poster children for the hazards of resisting concessions.

In Wisconsin, union leaders said yes to concessions and no to losing their collective bargaining rights. They lost on both counts. In Connecticut, a sizable chunk of the members said no to concessions—but without a plan for what to do next.

The successful example of state employees resisting a governor’s drive for cutbacks has yet to take place.

Malloy’s cuts were designed to wring $1.6 billion in cost savings out of the state’s workforce, to address a $3.2 billion budget deficit.

The Democratic governor also won income tax increases that will raise rates for all Connecticut residents earning more than $50,000, particularly those earning more than $250,000, according to an analysis from the state Office of Policy Management.

The contract was rejected despite the majority vote in favor because of the unions’ ratification rules. Contract talks for 45,000 state employees are conducted jointly through a 15-union umbrella organization, the State Employees Bargaining Agent Coalition (SEBAC). Coalition rules required that 14 of the 15 unions, representing at least 80 percent of the union workforce, ratify an agreement.

This go-round the deal was rejected by AFSCME (driven by “no” votes among corrections officers and human service workers), state police, judicial marshals, and SEIU service and technical staff at the Department of Transportation and the University of Connecticut.

After Malloy announced the first layoffs, SEBAC lowered the bar for contract approval. The coalition changed its bylaws July 18 to require only a majority of coalition unions, representing a majority of affected members, to OK a deal.

The legislature set an August 31 deadline for resolving the standoff and in the meantime gave Malloy extraordinary powers to implement budget cuts, which usually require legislative approval.

Malloy and the SEBAC unions reached a new agreement last Friday that mirrored the first deal. The unions are expected to vote under the relaxed ratification rules within two weeks, before Malloy's threatened layoffs begin.

This was the second round of concessions for Connecticut’s public employees since the recession began—a driving factor for the no vote. In 2009 they swallowed $632 million in givebacks, including higher health care costs, especially for new hires, and seven furlough days.

The rejected deal promised no layoffs for five years, but axed a 2.5 percent raise scheduled for next year. Four of the last five years have seen no increase.

Mark Lucy, a correctional supervisor and member of the Connecticut State Employees Association, SEIU Local 2001, said he backed the deal because it preserved relatively affordable retiree health care. “In our line of work, you can’t put a price tag on quality health care,” he said.

The agreement would have created a separate fund for retiree health, partially paid for by worker contributions.

The deal included other concessions, including a higher retirement age for younger workers. But nothing sparked opposition like the agreement’s “health enhancement plan.”

This program required all state employees to get a physical exam every year, including age-appropriate diagnostic tests like colonoscopies, along with two dental visits per year. It also required workers with chronic problems like diabetes or high cholesterol to enroll in disease management programs. Those opting out would face $100 a month in higher premiums.

Lucy says members were also worried they’d eventually be forced into SustiNet, a new state health care program now being set up for uninsured residents to implement the 2009 national health care reform. Though it was not part of the concessions deal, SustiNet’s directors recommended rolling state workers into the program as a cost-saving measure.

“It was just like the 2009 health care debate,” Lucy said. “Some members were worried they were going to be in front of death panels.”

CHOP FROM THE TOP?

Members were also upset at the disparities between managerial and non-managerial employees in the latest round of budget cuts.

Malloy campaigned on a platform of trimming the fat at the top of state government, but once in office he has made only token cuts to high-priced consultants and political appointees. This has been a particularly sore point for rank-and-file state workers, since Malloy owes his victory to labor’s electoral push.

“He said one thing as a candidate and did another once he was elected,” Lucy said. “When you’re asking for shared sacrifice, you should work your way down from the top.”

The way negotiations unfolded also pushed some to vote no. After the 2009 concessions, this year’s information blackout and close-to-the-vest negotiations left many members wary.

According to Dawn Tyson, a local AFSCME leader who processes benefits requests at the Department of Social Services, member suspicion only grew as media outlets reported conflicting rumors while union leaders remained quiet.

“They became mistrustful of their leaders,” Tyson said. “Things seemed to change so much they said, ‘you must be playing with the numbers.’”

Whatever deal emerges, it won’t get to the root of the state’s budget problem until lawmakers agree to raise revenues seriously, said Lucy. “We need to go after the people with the most ability to pay,” he said.