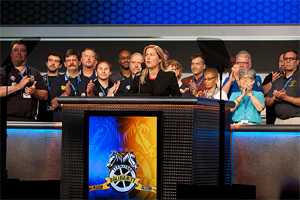 Sandy Pope won nomination for the Teamsters presidency at the union's Vegas convention. Backed by Teamsters for a Democratic Union, she made it into the next stage of a three-way race that culminates in mail-ballot voting by 1.3 million IBT members this fall. Photo: Jim West.

Behind every good man, one finds a good woman, or so we’re told. In this year’s contest for the Teamster presidency, that traditional relationship has been reversed—at least in Sandy Pope’s campaign.

Here in Las Vegas last night, it was a small band of good men and union sisters who rallied successfully behind a very unusual woman, one of only 16 who currently serve as Teamster local leaders. As a result of their efforts, Pope—president of Local 805 in New York City and the candidate backed by Teamsters for a Democratic Union (TDU)—made it into the next stage of a three-way race that culminates in mail-ballot voting by 1.3 million IBT members this fall.

Also nominated for president was Fred Gegare, a Teamsters regional leader from Wisconsin. Both Gegare and Pope received 9 percent of the delegates’ votes, while current President James P. Hoffa and his slate won 82 percent, at a convention completely dominated and controlled by the incumbents.

If these results seemed lopsided to some observers, they didn’t bother John Lattanzio, a mustachioed 57-year-old freight handler from Spokane, Washington, who was one volunteer who helped Pope sign up 50,000 rank-and-file supporters last November.

Nor was Lattanzio particularly rattled by the orchestrated booing that drowned out the delegates who nominated Pope and Gegare, along with the candidates themselves, when they tried to speak briefly yesterday morning. “If you got out of line at these conventions in the past, they just knocked you on your ass,” Lattanzio observed. “At least no one is getting beat up this year.”

Lattanzio and other TDUers recall that when Pope ran for secretary-treasurer on a reform slated headed by Tom Leedham of Oregon in 2006, she was nominated with just 6 percent of the delegates’ votes but then received 36 percent support from members.

And two decades ago, the most successful TDU-backed candidate ever, Ron Carey, became president of the Teamsters after winning 48 percent of the rank-and-file vote in a similar three-way race, when top Teamster officials fell out among themselves—as Hoffa and Gegare have done today. Carey’s support on the convention floor in 1991 was only 14 percent.

The disconnect between delegate sentiment, heavily pro-Hoffa, and the grassroots electoral support already demonstrated by Pope (during her signature gathering last fall) was not the only source of cognitive dissonance in Las Vegas.

Lattanzio, who works at the troubled freight carrier YRCW, has suffered a 15 percent pay cut and faces the loss of his defined-benefit pension and other contract protections. He found the bombastic rhetoric of top Teamster officials quite out of touch with workplace reality in the trucking industry.

“We used to have 2.2 million members,” he says with a mixture of wonderment and disgust. “Now we’re down to 1.3 million Teamsters and these assholes are bragging about it?”

Lattanzio believes many local officials are privately “scared to death.”

“They realize things need to change or we’re dead,” he said. “Even Fred Gegare, who’s on Hoffa’s own executive board, can see that the union is not going in the right direction.”

Lattanzio and his fellow delegates from Spokane got to Las Vegas the hard way, because none of them are full-time officials. They ran as rank and filers pledged to Pope and defeated a slate of pro-Hoffa officers in a 3,000-member local. Along with another TDU activist, UPS driver Tim Hill, Lattanzio spent this week handing out Pope flyers, talking to other delegates who are working members (a minority of those attending), and posting nightly accounts of convention activity on YouTube, Facebook, and the “Local 690/Teamsters United” website.

At a Pope for President fundraiser last Sunday night, which raised $15,000 in cash and pledges, Hill donated a week’s pay—$800—to the campaign, even though he has worked only five full weeks so far this year.

Lattanzio first became a union dissident in the 1970s—a second-generation member of TDU—after returning from a tour of duty in Vietnam and becoming a Teamster like his father.

Rocky Lattanzio, who is 80 now, attended the 1976 Teamsters convention in Las Vegas where soon-to-be TDU co-founder Pete Camarata was badly beaten by the incumbent’s henchmen. Camarata had spoken out on the floor against the inflated (and, often, multiple) salaries of top Teamster officials, a patronage system that persists today.

He then further enraged the officialdom by casting the only delegate vote against Frank Fitzsimmons, a member of his own Local 299 in Detroit, who was running for re-election as president.

Four decades ago, the IBT had no well-organized reform caucus, no membership vote on the top leadership, or any type of judicial oversight. The union was a cesspool of mob influence, benefit-fund corruption, various forms of racketeering, and violence against dissidents and wildcat strike leaders like Camarata. Among the gangsters at the convention in 1976 were those from Delaware and New Jersey who had only recently engineered the killing of James R. Hoffa, the convicted felon and former IBT president who sired the current one. (The body of the senior Hoffa, lauded by his son on Monday as “the greatest Teamster ever,” has never been found.)

Now retired from the Teamsters after a long career as a rank-and-file activist, Camarata talked about his encounter with John Lattanzio’s father during dinner with Local 690 delegates this week in Las Vegas. “It took a lot of nerve for Rocky to come up and say he was with us. I had no friends at all at that convention,” Camarata recalled.

Further impressed after reading a favorable article on TDU in Reader’s Digest titled “Can the Rank-and-File Clean Up the Teamsters?”, the Lattanzios invited Camarata to speak in Spokane in 1978.

Following a script that hasn’t varied in four decades, local officials began redbaiting their visitor and his local hosts. Soon, the word was out on the street that a notorious Teamster radical from Detroit—Pete “Commie-rata”—was coming to town.

John Lattanzio describes his mother as a woman “not afraid of anything.” But knowing what her husband and son were up against in the Teamsters, even she was worried. “What are you involved in?” she asked Rocky. To line up a hotel banquet facility for Camarata’s appearance, John Lattanzio had to empty his savings account. But the event proved a huge success. It helped establish the TDU chapter that, two years later, backed Rocky’s run for president of the local, in an early victory for the reform movement.

Now, John Lattanzio is mentoring and supporting a third-generation TDUer in the same local, who reminds him of himself at the same age. Thirty-three-year-old Tim Hill has long sideburns, colorful tattoos on both arms, and an affinity for the Industrial Workers of the World (IWW). Hill’s Wobbly ties and active grievance-filing almost got him fired early in his 12-year Teamster career when he was working as a part-time package sorter for UPS.

The charge was “sabotage” and the supporting evidence IWW tracts downloaded by a UPS labor relations manager and presented at Hill’s grievance hearing. His discharge was changed to a month-long suspension—a result that could have been worse, since Hill’s business agent sided with the company during the presentation of his case.

An Opening for Reform?

Lattanzio sees a political opening this year for the reform movement nationally and in Local 690 when officer elections are held next year. “People are ready for a change,” he says. “It’s a whole lot different because of what’s happening in UPS, grocery, and freight. In 1967, the NMFA [National Master Freight Agreement] was so strong, so solid, that everyone got to live a normal home life and we had decent working conditions.” Now, at YRCW, “they’re able to work us 11 or 12 hours a day continuously,” with variable start times and a backlogged grievance procedure that does little to curb contracting out and other contract violations.

Both Lattanzio and Hill are encouraged by the national publicity their articulate candidate has been getting in the New York Times, on CNN, and on CBS this week. Pope has 33 years of experience to draw upon in the grueling four months of campaigning that lie ahead. She may have more support even among convention delegates than was apparent publicly this week in Las Vegas.

As Camarata, Lattanzio, Hill, and I were wrapping up our dinner discussion Wednesday night, a hulking delegate seated at a nearby table got up and approached ours. A prison guard back home, he wanted to wish the two Local 690 delegates well. Both he and his heavily muscled companion were clearly troubled by the convention chairing tactics and delegates’ booing that made it impossible for Pope supporters to be heard on any issue.

“We’re Hoffa-Hall,” he said, with an almost embarrassed shrug. “But we don’t agree with what’s been going on. This is America and people have a right to disagree.”

This morning, the final day of the convention, John Lattanzio—exercising his right to disagree—will join Pope on stage when she delivers her acceptance speech. This time, there will be no way of drowning out the fact of her nomination or the real vote that lies ahead.

Steve Early is in Las Vegas reporting on the Teamsters convention for Labor Notes and In These Times, where this article was cross-posted. He was active in the Teamsters reform movement in the late 1970s as an organizer for the Professional Drivers’ Council, which became part of TDU, and later served on the staff of the Communications Workers for 27 years. He is the author of The Civil Wars in U.S. Labor from Haymarket Books.

Related
If the PRO Act Were Law, The Amazon Union Election Would Have Looked Very Different »
No One Else Was Going To, So These Teamsters Saved Their Own Pensions »
Viewpoint: Who Invited Them? Employers Like Amazon Should Have No Say in How Workers Organize »
In a Six-Day Strike, Bronx Produce Workers Doubled Their Raise and Inspired New York »
Opening the Door to a More Democratic UAW »