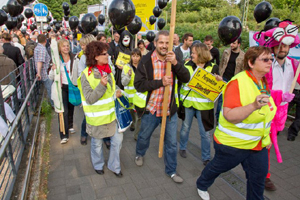 T-Mobile workers trying to organize face threats and intimidation, leading the telecom union on the German-owned company’s home soil to protest on their behalf. CWA and consumer advocates are fighting over whether the company's merger with AT&T is good for workers and consumers. Photo: Manfred Geneschen.

As T-Mobile technicians and organizers with the Communications Workers watched nervously, the election monitor opening the ballot box cut his thumb and nearly drenched the votes in blood.

It was one last heart-stopping moment in a tense campaign, which saw 15 Connecticut techs vote 8-7 to join CWA Local 1298. The closely watched vote set a winning tone for CWA in the first of several elections due at vigorously anti-union T-Mobile.

T-Mobile workers are joining up because the company is exploring a merger with AT&T, and having a union is their only defense against arbitrary management decisions during the merger. CWA backs the marriage because AT&T does not interfere when wireless workers try to organize. About 22,000 workers could join CWA through its neutrality agreement with AT&T if the merger goes through.

T-Mobile, however, has fought the union for years, and continues to delay votes for wireless technicians in New York. In Connecticut, T-Mobile tried to include engineers in the list of eligible voters, to dilute the pool of union supporters.

“They were trying to say those guys are out there with us in the sun, in the mud,” said Chris Cozza, a T-Mobile tech and leader in the Connecticut campaign. “Last time I saw one on the job, I was up on the roof freezing while he was inside talking.”

Cozza and another tech had to testify over four days of hearings before the National Labor Relations Board to establish which workers were union-eligible, an unusually long process for such a small group of workers.

Verizon workers, who are members of CWA, picketed in sympathy outside, protesting T-Mobile’s anti-union tactics. Verizon is the nation’s largest wireless company, followed by AT&T, Sprint, and T-Mobile.

Verizon’s 45,000 East Coast landline and fiber-optic workers are facing difficult negotiations ahead of their August 6 contract expiration. Management wants to kill pensions and get a health care plan that will cost workers thousands of dollars out of pocket.

CWA’s bargaining stance is weakened by its light representation among wireless workers: It only negotiates for workers at AT&T, giving it about 26 percent union density nationally in wireless.

“We need to represent a majority of wireless workers so we can bring living standards up,” Goldman said.

Particularly in an industry with one-half of work in call centers, which can shift location easily, the union needs to seize any opportunity to organize wireless workers—and AT&T has been the only company to allow it.

“All the others fight viciously to keep the union out,” she said.

T-Mobile, even in the throes of merger talk, is sticking to the anti-union script.

The company flew in executives from headquarters in Washington state to lecture against the union in Connecticut, and drilled workers for 42 days leading up to the vote on the company’s need to “maintain flexibility” and keep out “third parties.”

“The constant hammering worked on some guys,” Cozza said, noting that several workers who signed authorization cards flipped during the stressful anti-union campaign. Paranoid that T-Mobile might use the GPS in its trucks to monitor his location, Cozza would park a block away from union headquarters when he met with organizers. Other workers were sure their cell phone conversations were being monitored.

Local 1298 organizer Cindy Harrity said careful trust-building made the difference. For months, she talked every day with workers, several of whom she’s known for years, since they tried and failed to unionize under prior management. The clincher, she said, was bringing rank and file AT&T wireless techs who do the same work to talk to the T-Mobile workers. T-Mobile’s hysterics about restrictive union rules and fines melted away.

“The real reason they were fighting it is because with a union, their sale price goes down,” Cozza said, because T-Mobile must then negotiate about relocation and severance.

Nervousness about the merger drove workers’ interest in the union.

“Picture an airplane on the way down,” said Cozza, recounting the argument he made to fellow techs. “Who’s going to be there holding the door and pushing you out? Management, unless we land the plane softly.”

Not everyone is convinced the merger is imminent—or beneficial. Some consumer and internet-freedom groups, like Free Press and Public Knowledge, point out that companies always shed jobs when they combine. They fear resurrecting a Ma Bell-like telecom colossus: Verizon and the bigger AT&T combined would control 80 percent of the wireless market nationally.

CWA and AT&T claim 100,000 new jobs will come from the merger, generated by $8 billion in new investment to build out the network to 97 percent of the country.

Free Press scoffs at the claims, arguing that AT&T is offering to pay $39 billion for T-Mobile, limiting the cash it will have to build anything—and the promised $8 billion build-out is actually a net loss, considering the investments a standalone T-Mobile would have made.

“It’s a ransom situation,” said Dave Saldana of Free Press. “AT&T is trying to hold the rest of the economy over the barrel by conditioning its investment on approval for the merger.”

CWA’s Goldman says timetables for investment will be written into any merger approved by the Federal Communications Commission. And the union will work at the bargaining table and with regulators to make sure AT&T lives up to its CEO’s promise—given in Congressional testimony—that any short-term job loss after the merger will be handled through attrition and bringing back offshored work, not through layoffs.

“If history is any indication,” Saldana said, “the FCC doesn’t have the will to rein in renegade providers.”

Goldman said the consumer groups are unwilling to acknowledge that T-Mobile will disappear under all circumstances: its German parent company announced it would not pay to build the next generation of wireless technology in the U.S., which put T-Mobile on the selling block.

Sprint had been wooing the company, but Goldman was pleased T-Mobile chose AT&T, noting that debt-ridden Sprint limped along for years after a disastrous Nextel merger, and contracts out much of its work, much of it overseas—putting downward pressure on workers.

Sprint also stomps on workers when they attempt to organize, going so far as to close a San Francisco call center rather than allow a union election.

AT&T has moved aggressively against its own workforce, too, stuffing a substandard contract down workers’ throats in 2009—one that Verizon is now trying to emulate.

Plus, AT&T is cutting its landline workforce drastically (shedding 40 percent in California) and—like Verizon—has refused to build the fastest technologies to low-income and rural areas.

With that kind of track record, Saldana says, union and consumer advocates should think twice about blessing its marriage with T-Mobile.

“Are AT&T’s promises worth it?” asked Saldana.

“Definitely,” Goldman replied. The union needs members to have any leverage on policy.

Related
New Jersey Welfare Workers Sound the Alarm on Safety »
If the PRO Act Were Law, The Amazon Union Election Would Have Looked Very Different »
Viewpoint: Who Invited Them? Employers Like Amazon Should Have No Say in How Workers Organize »
After Seven-Year Battle, Massachusetts Comcast Techs Win First Contract »
Goodbye and Good Riddance: Biden Fires Labor Board’s Peter Robb »

If AT&T gets to buy t-mobile they will lay off most of the people and then request concessions from their unions.

When you strike they will have a large skilled set of people available to take your jobs, end of CWA.

No merger has ever created Jobs, anyone who thinks that the FCC or the labor board will force them to hire your smoking crack.

You might not like Sprint but you should focus on unionizing them. They sell access to companies that then turn around and give their profits to progressive causes that their customers pick, Credo Mobile.

The story that is not being told here by the powers that be is, T-Mobile and ATT's version of,"natural attrition" is through making our lives hell at T-Mobile. T-Mobile is actively cutting people left and right by raising the metrics so high they are unattainable which in turn makes it easier to fire people. Once they are fired, T-Mobile also makes sure to fight the unemployment insurance claims of those same people.The other tactic that is being used to put SO much stress on us on the front line that a lot of people throw their hands up and quit so they can literally maintain their sanity and their health. Between the firings and people quitting there has been a significant workforce reduction. Once people either quit or are fired, T-Mobile is not refilling the open positions and has put a hiring freeze on for most of the country.

CWA provides an online forum for T-Mobile USA and T-Mobile Deutsche employees to exchange ideas. On this forum there was an informal survey of how many people are still working at the various call centers around the nation. Here are the numbers:

There may not be job losses when ATT takes over but that is only because T-Mobile is doing its damnedest to do the dirty work for ATT and wring as many dollars from their US business before Deutsche Telekom sells us. The recent loss of the coveted JD powers award is a clear indicator that T-Mobiles strategy is working. Many of us do not know if we will survive until ATT takes over. We all walk into work wondering if today is the day we are handed an empty copy paper box to carry our belongings out as we walk from the building after being fired.