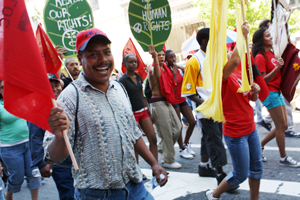 Faced with a surge in guestworkers laboring in the fields, farmworker unions in the U.S. and Canada are crossing borders to organize them and to hold governments to account for programs that exploit workers.

Guestworker programs provide temporary work visas to foreign workers, either for a season or for several years. Without a union, employers can deport them at any time and banish them from the program.

“At best, it is modern-day indentured servitude,” said Naveen P. Mehta of the Food and Commercial Workers (UFCW) Canada. “At worst, it is akin to modern-day slavery.”

Although governments say the programs provide “opportunity and prosperity” for workers, advocates say pay and working conditions are appalling and employer-provided housing is unbearable.

Employers like guestworker programs because they have the same advantage as hiring undocumented immigrants—employers can threaten deportation if workers speak up—with the added benefit of a government stamp of approval.

Workers in such a vulnerable position have long been thought impossible to organize. But the programs’ legitimate nature enables worker leverage, as official rhetoric clashes with reality in the fields.

Organizers are making the most of it.

Farmworkers on the Move

Stan Raper said guestworker programs have ramped up in recent years because employers and government want to “keep workers migrant and mobile, where they can be exploited, with language and cultural barriers.”

“It’s a global trend,” said Raper, head of the Agricultural Workers Alliance, an organizing project of the UFCW in Canada.

In New Jersey, employer requests for workers in the last decade have grown from a handful of farms to 50, said Nelson Carrasquillo of the Farmworker Support Committee.

The guestworker programs in Canada have also expanded, from tens of thousands a decade ago to 250,000 now. The Temporary Foreign Worker program started in 2002 undercuts already low standards for seasonal agricultural guestworkers, creating what the UFCW calls “a permanently exploited migrant underclass.”

Union organizers in Canada call the change the “Americanization” of their immigration system.

Workers come to Canada for up to four years under the program, to fill farm, childcare, and restaurant jobs. Often they owe huge sums to job contractors who game the system in their home countries.

CUTTING OUT THE FLOOR

Working conditions are appalling, said Rangel Ramos, coordinator of a worker center in the Niagara region that serves 5,000 Mexican and Caribbean guestworkers in grape fields and greenhouses. “No overtime [pay], no safety equipment, it’s the modern slavery era for those guys,” he said. Some women also come under the program, mostly for shorter stints packing fruit.

Workers are paid minimum wage. If they can’t keep up with the pace the farm owners require, they are sent home and can’t return. They work six-day weeks, 10- to 12-hour days, and Canadian holidays don’t apply.

Housing is provided by the employer, and Ramos said he’s seen 12 workers sharing one bedroom. “I’m in shock sometimes, things I can’t describe,” said Ramos, who is originally from Colombia.

Some workers have come every season for 20 years, because work is so scarce in their home countries.

In response, the UFCW in Canada has made connections with farmworker groups in Mexico, and has signed cooperation agreements with the governor of Michoacán and with the Federal District of Mexico City. The agreements provide an exchange of information, so the union can protest on behalf of workers that employers kick out of the country.

As a result of cross-border connections, hundreds of workers in Mexico City and Guatemala City marched on Canadian embassies last fall to protest their experiences in the Temporary Foreign Worker program. They said guestwork programs mean “shut up or be shipped out,” according to a UFCW report.

In February, 130 Ontario guest workers were left with a quarter million dollars in unpaid wages when their employer claimed bankruptcy. The union recovered some money for the workers and is fighting for the rest.

In provinces where workers have secured a contract at big operations, guestworkers are protected by it. In Manitoba, UFCW Local 832 negotiated a contract for meatpacking guestworkers that provides a path to citizenship through a provincial immigration program.

FLOC started an innovative and risky effort to organize guestworkers in 2004. The union opened an office in Monterrey, Mexico, enabling workers to bypass labor contractors who sell access to visas.

These middlemen are a common feature of guestworker systems; they typically leave workers with crushing debt even before they earn the first dollar in their new job. The debts pursue them, even if promised jobs fail to materialize.

FLOC organizer Santiago Rafael Cruz was killed in the Monterrey office in 2007. The murder has never been solved, but FLOC members suspect the labor contractors who had lost the power to extract money from workers.

A tenth of the 100,000 seasonal workers in North Carolina come to the U.S. as guestworkers. Most are now covered by FLOC contracts with the North Carolina Growers Association, picking cucumbers and other crops. FLOC is now working to cover seasonal tobacco workers.

When guestworkers do win a union, it’s a struggle to keep it. At the end of the season pro-union workers may find they have been blacklisted and can’t return.

The Mexican consulate in Vancouver is facing a union complaint that it colluded with employers to eject union supporters even though the workers’ contract guaranteed their right to return each season, by seniority.

According to the complaint, guestworkers at two greenhouses were threatened with losing their jobs unless they signed a decertification petition.

FLOC also uses seniority language to fight retaliation in its North Carolina contract. As a result, organizers in Monterrey have been able to stabilize the core leadership of active rank-and-file members, FLOC organizers said.

Senior members return to North Carolina for the harvest season, but not before making a stop in Monterrey for trainings on their contract, workers’ comp laws, and the history of FLOC’s fight for justice.

Diego Reyes, a FLOC organizer based in Monterrey, said he takes the union message to Durango, Guanajuato, Puebla, and San Luis Potosí, where workers discuss the union and how to improve conditions in the fields. Some sign up for membership on the spot.

H2A regulations for agricultural guestworkers were trashed by the outgoing Bush administration, in a goodbye kiss to farm corporations.

The Department of Labor reversed the changes in March 2010, restoring wage rates that had been slashed by $2 an hour, along with a requirement that employers reimburse workers for transportation from their home country.

Now, in a step forward for U.S. guestworker organizers, the DOL is proposing new regulations for the H2B program, to cut out labor contractors and protect workers from retaliation for organizing. H2B workers take seasonal jobs in seafood processing, construction, hospitality, landscaping, and forestry.

If adopted and enforced, the regulations would provide some stability, requiring that employers provide the type and hours of work they promised and creating penalties for violations of workers’ rights.

Further off on the legislative horizon is the POWER Act, which would protect any worker from retaliation, no matter their immigration or guestworker status. Carrasquillo called the act “crucial to actually being able to change the landscape of employer abuses.”

Diego Reyes of FLOC said, “It’s about losing the fear of deportation and securing the ability for workers to speak up and address the subhuman conditions workers face in the fields every season.”

Eduardo Soriano-Castillo contributed to this story.