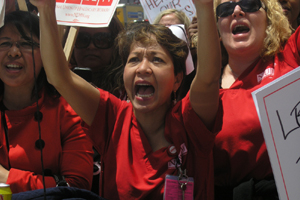 Hundreds of workers at a central California hospital return to work today, following the third short strike this year by the National Union of Healthcare Workers. NUHW uncovered a deal in Salinas that handed the CEO $5 million, along with $12 million for consultants, while staff was cut. Photo: NUHW.

Hundreds of workers at a central California hospital return to work today, after a two-day lockout that provoked a complaint from the state labor board.

Workers at the Salinas Valley Memorial Hospital, two hours south of San Francisco, were locked out after taking to picket lines on Tuesday.

The daylong strike—the first ever in the hospital’s 58-year history—was called by members of the National Union of Healthcare Workers (NUHW) after stalled negotiations with hospital management.

The union, which represents techs, professionals, and service workers in the hospital, is fighting plans to cut more than 100 direct-care positions and trim pension and health care benefits for new hires.

The labor board’s complaint says the Salinas lockout was illegal retaliation for striking. A decision is expected within a month—and could net workers back pay for the days they were locked out.

It’s the third short strike this year by NUHW, which was founded in 2009 after SEIU placed its third-largest local, the dissident United Healthcare Workers-West, into trusteeship, prompting members and leaders to establish the breakaway union.

The struggles are a critical part of the union’s development, as NUHW members work against intense opposition from employers and their former union to secure first contracts for its 10,000 members statewide.

“We’ve never operated in the red,” said Ester Fierros-Nuñez, the Salinas union chairperson. “But now top administrators are treating this hospital, and the community, like their personal ATM.”

Hospital executives have been under close scrutiny after the union uncovered a deal which provided the recently departed CEO more than $5 million in pension and severance on top of the $150,000 a year he collects from the state pension plan.

Outrage over this taxpayer-funded golden parachute has spurred a state audit of the hospital’s finances. According to Fierros-Nuñez, six additional executives have the same kind of deal, which allows recipients to bypass IRS tax shelter rules by funneling money through multiple pensions.

“It’s like Enron,” she said. “They want to cut folks at the bottom so they can pay more to people at the top.”

NUHW has also criticized the hospital’s decision to spend $12 million on outside consultants, most notably Wellspring Partners, a Chicago-based firm. The consulting company, under prior ownership, was involved in the takeover and closure of St. Vincent’s hospital in New York City.

In St. Vincent’s bankruptcy proceedings, it emerged that the consultants had billed the hospital for everything from groceries and dry cleaning to opera tickets and club memberships. Union activists worry that Wellspring is milking their hospital as well.

The biggest concern voiced on Tuesday’s picket line was for the hospital’s patients.

According to Debbie Prader, a 38-year licensed vocational nurse at the hospital, staff cuts that started a year and a half ago have sent workloads skyrocketing.

Previously, Prader typically worked her entire shift on a single floor, with an average of 10 patients. Now she’s covering two or three floors, and caring for up to 19 patients.

“They’re dismantling the whole hospital,” Prader said. “There’s no way to give good care in these conditions.”

Lily Garner, a 30-year medical transcriptionist at the hospital whose sister is currently a patient, said she’s seen the impact first hand. Basic help, like bathroom assistance, is lacking, she said.

“The people making all the decisions aren’t in contact with patients,” said Linda Vallez, a certified nursing assistant for 31 years at the hospital. “All they see is numbers on a spreadsheet.”

Salinas Valley Memorial is just the latest example of a profitable hospital looking to take advantage of the recession and lower staffing standards.

The same drive for concessions led 2,500 NUHW members in Southern California to launch their second one-day strike at Kaiser Permanente facilities on May 18. The health care giant made more than $1 billion in profits last year but is pushing for layoffs and major pension and health benefit takeaways.

“Kaiser executives are making more money than ever and are giving themselves huge raises, but they refuse to provide nurses with the staff we need to take care of our patients properly,” said Roxana Valadez, a pediatric nurse in Los Angeles. “And now, they’re not just keeping us understaffed, they also want to cut our benefits. Kaiser is becoming a worse and worse place to provide patient care.”

The fights at Kaiser and Salinas hold the promise of stabilizing NUHW’s financial future, if they can win the union a first contract—and dues checkoff. (The union is hand-collecting dues in the meantime). Tight resources have hampered the union’s expansion, leading it to withdraw from numerous elections in recent months.

But even more important, the struggles are defining NUHW’s identity independent of SEIU.

There is no question the union will continue to run and win elections in SEIU bargaining units across the state, and extend their reach into non-union hospitals and nursing homes. NUHW’s recent victory in three of the four California Pacific Medical Center facilities in San Francisco is the latest example of its enduring appeal.

But the union’s most important challenge right now is to make good on its founding promise—that workers can build a democratic union willing to stand up and fight.

This task is doubly difficult when unions everywhere are ducking for cover, and when taking concessions is the norm. SEIU’s California leaders have agreed to health care cost-shifting and pension takeaways at health care facilities, giving management yet more reason to take a hard line against NUHW.

For NUHW’s members, there is no going back to the union they once had. And workers from Santa Rosa to San Diego have demonstrated they’re ready to build something new, and hopefully better, in its place.

Related
Massachusetts Nurse Strikers Aren’t Blinking »
Viewpoint: Solidarity for the Tenet Nurses Strike Should Be Labor's Top Priority Right Now »
Steward's Corner: How One Union Uses Kitchen Table Economics to Advance Medicare for All »
Employers Are Using the Crisis to Push Concessions They Don't Need »
Engines Out and Pickets Up to Stop Health Plan Downgrade by Cummins »