The Mood in Wisconsin: Shaken, Angry, but Proud 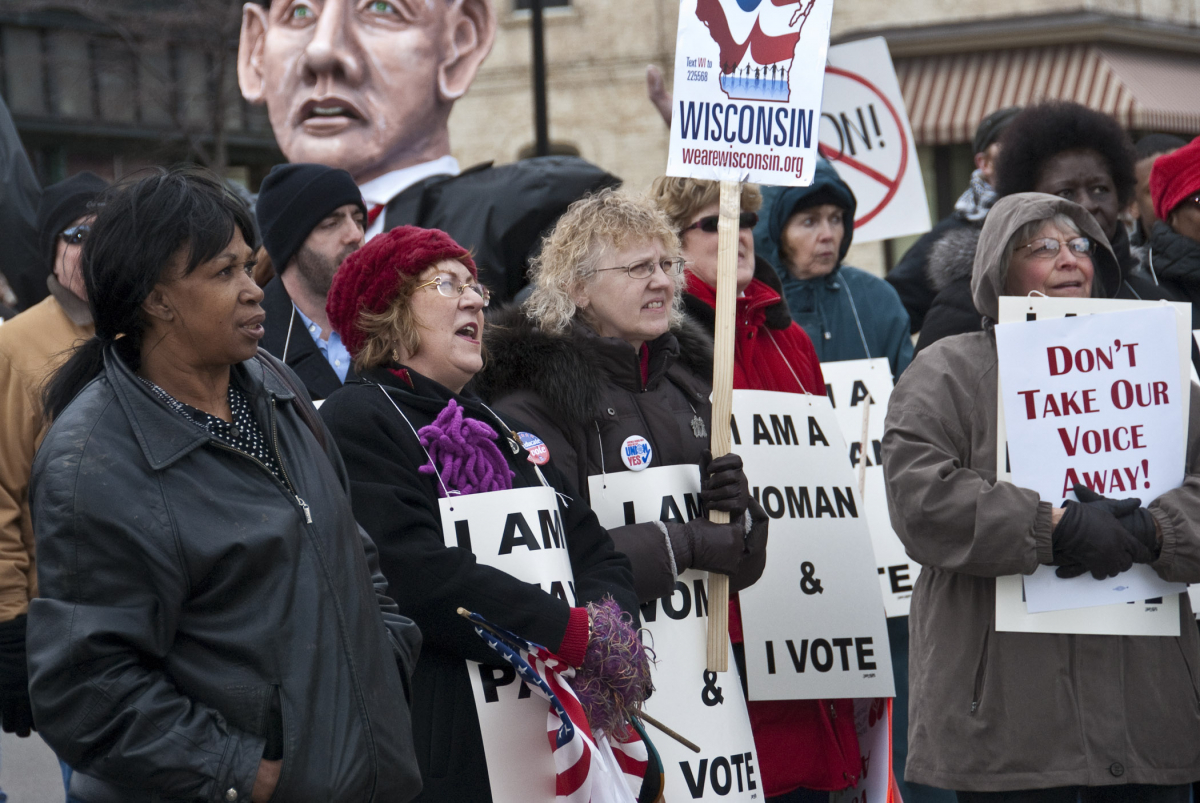 Republicans in the state senate passed the “budget repair” bill March 9, which would strip unions of almost all their collective bargaining rights. It remains in legal limbo because of a lawsuit, although unions expect the bill to take effect eventually.

Yet the unionists’ mood is more angry than depressed, says Jim Cavanaugh, South Central Federation of Labor president. At a Labor Notes Troublemakers School in Madison April 2, the feeling was mainly pride.

Of course, Cavanaugh and the troublemakers are the activists. Carl Aniel, a food service worker at the University of Wisconsin, says his co-workers are “50-50. Some are incredibly frustrated and stunned. Other people are very motivated and want to do more than has happened this far.”

In Madison, the movement feeling is far from over. People still walk the Capitol Square with signs each day, and many wear buttons. Placards against Governor Scott Walker decorate the windows of houses and downtown businesses.

The Mood in Wisconsin: Shaken, Angry, but Proud

Defense Makes Big Save in Indiana

Tea Partiers at a snowy April 16 demonstration at the Capitol were surrounded by at least 5,000 counter-protesters. More than 1,000 teachers and other public employees came to a state budget hearing in Milwaukee April 11—and chanted “Shame!” as Republicans walked out on them.

A plethora of labor-community coalitions have formed or been energized. An activist could find a meeting or a training to attend every night of the week, or could petition to recall Republican state senators, or march with Iraq Veterans Against the War. The state AFL-CIO is organizing more big rallies, including one in Milwaukee May 1 linking worker and immigrant rights.

Management, of course, is taking advantage of the moment: Walker threatens layoffs of state employees. Department of Revenue managers warn that slow-downs will be punished. In the Department of Corrections, they promise that an old (corrupt) bonus system will be brought back.

In a small conservative town, the school board voted to suspend teachers for taking a day off to protest at the Capitol back in February—plus extra suspensions of five or 15 days for those who discussed union business or talked to the media on district property.

In March, the state retirement system received a record 3,255 applications, more than double the same month last year, from workers fearing they’ll lose benefits when they lose their contracts.

As they confront an entirely new situation, the unions’ prior flabbiness is showing. “There are still great opportunities and members are offering to help,” says state employee Barbara Smith, an energy efficiency specialist. “But there’s a real lack of organization.”

Wisconsin public employee unions before the crisis resembled the norm—a mixed bag of activism and inertia, overlaid on a “servicing model.” Many leaders prided themselves on gains won through staff work and arbitration, rather than member action.

Even during the most intense days of confrontation, said Mark Thomas, a steward at the University of Wisconsin, his members were “left to their own devices. You looked at Facebook to find out what’s happening next, because you were getting nothing from Council 24,” the statewide group for state employees.

Smith says her union, the Wisconsin Professional Employees Council (WPEC), held only two or three meetings during the crisis and allotted no time for discussion among members.

On the other hand, President Gary Mitchell of the university clericals’ union says he bombarded members with information and held membership meetings every Sunday. The local organized meet-ups for members to march to rallies together.

But not all employers would sign even concessionary agreements. About half of teachers’ units in the state don’t have contracts. Walker let all state employee contracts expire March 13.

For now, dues are still being deducted and the increased pension and health care contributions required by the budget repair bill (about a 10 percent pay cut) are not. But unions are preparing for both those facts to change by June 30, when the fiscal year ends.

Walker’s bill says unions must hold an annual vote in order to be certified, winning 51 percent of the whole unit, not just those voting.

Jack Bernfeld, associate director of AFSCME Council 40, says certification would get the unions almost nothing: the right to talk to management about wage increases up to the rate of inflation.

Most unions say they won’t bother with certification. Instead, Bernfeld says, union staff must shift from highly technical servicing work to “mobilizing people to show up at city council meetings, school board meetings, protests, influencing the public and elected officials to do the right thing.”

Meanwhile, the unions are preparing to collect dues without check-off. The university clericals voted to devote $5,000 to lost time and lunch and after-work meetings to convince members to sign up for credit card or bank draft deductions.

The university locals asked AFSCME to lower dues, since members will soon take a big pay cut. But they got little relief, just a few dollars off the statewide average of $39 a month.

Everyone agrees that dues will be a hard sell. “People have different perspectives on whether the union will still be what it was or should be,” said WPEC President Greg Georg, “and that may affect whether they’re willing to pay dues.”

Especially, said Anne Habel of AFSCME Local 171, if they’re asked to pay for a statewide organization and “they don’t understand what they get for it.”

In unions where the grievance procedure will soon be gone, do leaders see the need for building a got-your-back network to confront the boss?

Mostly not, it appears. Old habits die hard. Thomas says his statewide union still isn’t organizing any solidarity actions, even minimal ones like wear-a-button day. “It’s like the building is on fire and we’re still sitting in the bar having a drink,” he said.

But Smith says a cross-union stewards committee for her building is meeting weekly to find out what actions members there might be willing to do. They’re considering wearing black armbands the day pay cuts take effect.

Madison’s Firefighters local has set up member committees that have had no trouble recruiting, according to President Joe Conway. One is figuring out how to organize members to spend their money at businesses that support public employees.

In the past month, unions focused on a Supreme Court election April 5 and on gathering signatures against the eight Republican state senators eligible for a recall. Petitions have been submitted for three senators, and another is expected soon. Strategists are confident of at least two victories.

In the Supreme Court race, unions backed an unknown Democrat who had finished 30 points behind the Republican incumbent in the primary. The vote—which unions painted as a referendum on Walker—gave the incumbent a margin of less than half of 1 percent. Results of the recount are due May 9.

Wisconsin workers are acutely aware how unusual their struggle was, and how inspirational to others. Diane Tieman belongs to a small state AFSCME local. She’s determined that Wisconsin continue to set a good example.

“With these other states going through the same thing—Ohio, Florida, Michigan, Washington,” she said, “we feel more sense of responsibility to be successful.”

A version of this article appeared in Labor Notes #386, May 2011. Don't miss an issue, subscribe today.
Related
How We Turned Bargaining Around at Law360 »
Virginia Public Sector Workers Are Organizing to Make Their New Bargaining Rights a Reality »
Will the Stimulus Stop States From Slashing More Jobs? »
Steward's Corner: Drafting Good Contract Language »
When You're Winning in the Streets, Don't Lose at the Bargaining Table »