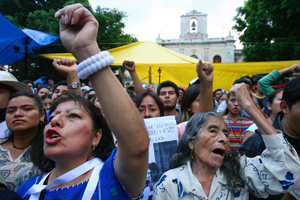 Seventy thousand teachers in the Mexican state of Oaxaca struck, demanding better funding for their students. They oppose a scheme that will reward educators for teaching to the test, too, in the biggest actions since a 2006 rebellion. Photo: Edward A. Ornelas/San Antonio Express-News/ZumaPress.

Seventy thousand teachers in the Mexican state of Oaxaca struck May 23, demanding better funding for their students. The strike began with a march from four different points to the city’s square, where the educators rallied and then spread out to put pressure on both government and business.

Teachers blockaded government offices and private companies, closed major intersections, and “liberated” the toll booths on the privately owned highway to Mexico City. They also attempted to shut down the airport.

Oaxaca is a stronghold of a longstanding opposition caucus within the teachers union and while the strike is over local issues, it also demonstrates the teachers’ opposition to union president Elba Esther Gordillo.

She recently signed a new agreement which will reward educators for teaching to a new national test, which teachers in some areas have protested and refused to administer.

The Oaxaca teachers are making no new wage demands. They insist, however, that the Oaxaca state government install computers in all elementary schools and pay the schools’ electric bills. According to union spokespeople utility bills are currently paid by parents.

The state governor claims he’s offered about $128 million to settle the dispute, while the union says the offer was only about $59 million. The governor says the state can afford no more and asked the union to keep the strike “as brief as possible.” Strikes in Oaxaca have taken place virtually every year since the mid-1970s and have sometimes lasted for months. Azael Santiago Chepi, a union leader, said the government’s offers were “minimal and insufficient.”

In 2006, then-Governor Ulises Ruíz turned out the police to attack striking teachers as they slept in Oaxaca’s main square, and many believe that he also created death squads that killed more than 20 teachers and their supporters during protracted strikes and protests.

This month’s actions are the strongest since that year’s “Oaxaca Rebellion,” when citizens took over radio stations, set up barricades, and created a dual power situation in the city. Ruíz was defeated in a re-election bid last year.

Other teacher locals in Chiapas, Michoacan, Tlaxcala, Guerrero, Baja California Sur, and the Federal District could join the Oaxacan teachers in striking over local and national issues.

The Oaxaca strike comes as Mexican President Felipe Calderón signed an agreement May 26 with Gordillo, the teachers union head. The pact is intended to transform Mexican education by rewarding teachers for their students’ success in passing national achievement tests.

When students score high, the agreement will reward their teachers with more points on their evaluations. Fifty points out of 100 in teachers’ annual evaluations will be based on student achievement.
Until now student stores on the exam represented only 20 points on the evaluation, but now they’ll be 40. Teachers receive just 10 points for their years of service.

Teachers whose students score highest on the test will receive a $1,725 bonus. Some outstanding teachers will be rewarded with houses.

The teachers opposition caucus rejected the national achievement test, the new teacher evaluation system, and the broader education overhaul that Calderon has argued for since his term began in 2006. The teachers say test-driven education is bad for both students and teachers, and that linking bonuses and prizes to test scores will encourage fraud.

Gordillo, an ally of Calderón, was elected at meetings that violated the union’s statutes. Oppositionists argue she has no standing to negotiate a pact on behalf of the teachers, but the government refuses to act on dissident demands to investigate and remove her.

The test measures students’ “acceptance and adaptation to the system,” said Sergio Espinal, leader of the opposition caucus, at a press conference. “It is the final point in the application and justification of business discourse. It measures their familiarity and competence in the market.”

Another opposition caucus founder and leader, José González Figueroa, said that instead of spending resources for these programs, money should go to “resolve the chaos in Mexico’s education system, and to open school breakfast centers for students, and to repair the schools.”

The caucus represents a majority of teachers in several states, and leaders promised to demonstrate in Mexico City and elsewhere as they build toward a general strike by teachers against the new testing scheme.

Thanks to La Jornada and other Mexican and U.S. media for some of the information in this article.