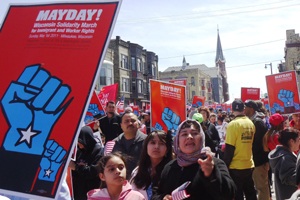 Wisconsin's May Day marches saw a surge of participation as immigrants and unions joined to protest legislative assaults on their rights. Photo: Karen Hickey, Wisconsin AFL-CIO.

In cities throughout the U.S., tens of thousands marched on May Day to demand an end to attacks on workers and immigrants.

Some traditional hotbeds of activity, like Los Angeles, turned out much smaller crowds than in previous years, while others, like Madison, saw a surge of participation as immigrants and unions joined to protest legislative assaults on their rights.

Egyptian workers celebrated May Day for the first time since toppling their dictatorial government.

In downtown Los Angeles, about 3,000 car washers, restaurant workers, and day laborers joined unionized teachers, service employees, and building trades members to demand immigration reform, union rights for all, and a stop to deportations and the separation of families.

Holding signs that read “No Arizona. No Wisconsin. We’re California,” marchers in the annual May Day rally aimed their protests at Congress and President Barack Obama. They accused them of allowing what many called a patchwork of racist laws against the undocumented to sprout up in states and municipalities.

While the Obama administration is challenging Arizona’s anti-immigrant law, similar legislation has emerged in Georgia and Utah, and national legislation to legalize 11 million undocumented people has gone nowhere.

Pedro Guzman from Honduras, an 11-year veteran of the car wash industry, said May Day should “ensure that decision makers in Washington do not forget the promises they have failed to deliver.”

Guzman is training as an organizer with LA’s Community-Labor-Environmental Action Network, which is pushing to organize the carwash industry, along with the Steelworkers.

“We have had all we can take,” Guzman said, noting that Obama’s administration deported a record 392,000 people last year.

In Milwaukee 25,000 workers, almost all of them immigrants, marched from the barrio through downtown, gathering numbers as they walked. Big immigrants’ rights marches on May Day have been a tradition in the city since 2006, when massive protests nationwide turned aside federal legislation that attempted to criminalize undocumented immigrants.

But in Minneapolis, where the state legislature is now considering an Arizona-style bill, the immigrant community was on its own.

Several thousand had been mobilized by unions and the NAACP to turn out April 4, the national day of action called by the AFL-CIO to protest attacks on workers by state legislatures and to mark Martin Luther King’s assassination.

But only hundreds came out for May Day in the Twin Cities, and the state AFL-CIO, the central labor councils, and most union leaders were absent.

In Egypt thousands of workers came to Tahrir Square to demand the dissolution of the government-run union federation and to celebrate the founding of independent unions. Banners announcing new unions were hung around the square.

Reda Noaman of the Real Estate Tax Authority union, the oldest independent union, said 21 new unions have been formed since the January 25 revolution.

A smaller protest was held outside the government union federation, demanding the trial of its former President Hussein Megawer. Commemorative services were also held for the more than 850 protesters killed during the revolution.

A popular tribunal in the square staged mock trials for Hosni Mubarak and Megawer.

Chris White, an American labor activist on the scene, wrote, “The interim military government has been sending mixed messages by recognizing independent unions on the one hand and threatening to prosecute strikers on the other.”

Vermont activists took the opportunity to fuse their campaign for universal health care with a defense of immigrant workers—whom state senators want to exclude from health coverage.

A colorful, boisterous march of 2,000 converged on the Statehouse in Montpelier in support of health care as a human right. The rally came as the legislature is reconciling House and Senate versions of a universal-care bill, which the governor is expected to sign within days.

Nurses in red scrubs, farmworkers, teachers, and IBM workers chanted, “Our health care is not for profit.”

Marchers spoke up for undocumented immigrants because under the Senate version of the bill, Vermont’s 2,000 or so undocumented dairy workers would be excluded. “Universal = Everyone,” read a popular sign.

After a four-year struggle, the small but fiery independent security officers union at the Philadelphia Museum of Art celebrated May Day by signing a first contract.

The union became a cause célèbre for Philadelphia activists as it struggled for years alongside Jobs with Justice and community, student, faith, and union activists to win recognition and then a contract from the three private security firms that provide subcontracted security services at the museum.

The three-year deal raises wages by 14.5 percent to $10.88 an hour and gives all 160 guards a grievance procedure and seniority system.

Most important, members say, the contract offers a rallying point that Philadelphia security officers have not had since the early 1990s when Mayor Ed Rendell privatized security operations at the city-owned museum.

“Any worker can get organized and improve their lives. We have proven it,” said Sulaiman Kamara, AlliedBarton security officer and union treasurer.

Jane Slaughter and Jenny Brown contributed to this piece.