From Breakfast Club to the Big Time 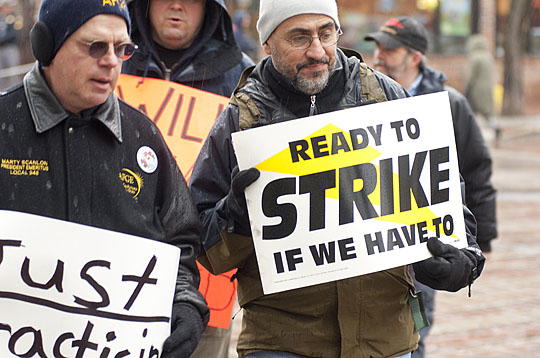 It started over breakfast: with a good rank-and-file communications system, bus drivers in northern Vermont won the contract they wanted. Photo: Mark Collier.

Two years ago the bus drivers and mechanics of Teamsters Local 597 were about as disconnected as they could be from our union. Negotiations with the Chittenden County Transportation Authority in northern Vermont were going on, but no one was seriously involved.

Two rank-and-file bargaining team members saw there was no way members could have a voice in negotiations, so one boycotted the process and one resigned. Members voted down the first tentative agreement, but we ended up with worse language on personal time.

We decided it would not happen again. We contacted Teamsters for a Democratic Union and learned how to set up a communications system and a contract campaign. We began to call ourselves the Sunday Breakfast Club, holding our meetings in restaurants.

With this new caucus formed, we addressed internal organization first. We got elected as stewards, which put us on the negotiating committee and cut our reliance on leaders of the statewide Teamsters local for information.

We started a newsletter that we disseminated member to member. It took a few tries to get right, but when it was fine-tuned, getting information out to 60 drivers and 10 mechanics took a matter of minutes. We also set up a phone tree with communication captains and continued to hold regular Breakfast Club meetings.

Long before the contract expiration approached in June 2010, we released our own rank-and-file survey to find out what the membership valued and where our priorities were.

Those turned out to be resisting part-time work and tightening up discipline language. Management was using “but not limited to” language to discipline members for whatever they wanted and was skipping steps for some and not for others. The survey results established a baseline for our contract campaign and started unifying members.

The union leadership, which had been in office for 20 years, put out a survey a week after we did, which seemed to have about five minutes of thought put into it.

They would prove repeatedly to be five steps behind where they should have been. We battled to overcome their complacency and get them on the same page, although they weren’t happy about a grassroots group telling them how to do their job.

Union leaders then agreed to a contract that contained a loophole for unlimited part-time work and didn’t address discipline. That rallied the members. The first ratification vote—37-1 “no”—certainly quantified our feelings! The parties went back to the table.

We had decided that if the vote was “no” we would pursue the public option and start building for a strike. If the public and other unions stood behind us, we felt we couldn’t lose.

We made arrangements for a strike headquarters. We reached out to labor, college students, and the community. We gave leaflets to our riders and talked with them on the bus and at the station. Student supporters at the University of Vermont—which has a big contract with our employer—got the student senate to pass a resolution.

The Vermont Workers Center, an affiliate of Jobs with Justice, educated its members. At a high-energy rally at Burlington City Hall, the president of the Champlain Valley Central Labor Council and many other members of organized labor spoke out.

Most importantly to the drivers, our passengers spoke out to praise our service and to say they would stand with us. Vermont was looking for a reason to stand behind workers fighting for rights on the job.

On April 10 management presented a second offer to our members. The union’s letter stressed the contract’s economic gains—which showed us that leaders weren’t listening. And no specific contract language was provided.

We campaigned for a “no” vote, but we didn’t need to be all that forceful. The vote was 52-6. Half the bargaining unit showed up to watch the count.

By this time local leaders just wanted it to be over. They set a strike deadline five days away.

We had already started strike preparations. We had created a new phone tree and talked member to member to educate and unify people.

The long months of building solidarity, of reaching out to brothers and sisters in other unions, began to pay off. In the final hours before the strike deadline, management asked us to come back to the table.

After 10 hours of bargaining, a deal was made that treated us with respect. Our discipline language now says simply that members will be disciplined for just cause and progressively.

Members say the Sunday Breakfast Club will live on to support all labor in Vermont. Our own members stood up, and many in labor stood with us.