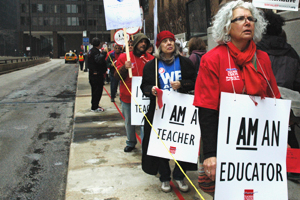 Reformers who took over the Chicago Teachers Union on the strength of their grassroots fighting style face their steepest challenge yet. It comes in the form of an anti-teachers-union measure backed by billionaire-funded lobby groups and pushed by Democratic lawmakers. Photo: CTU.

Now, in the wake of Republican-led attacks on public employees in the Midwest and elsewhere, the union faces its steepest challenge yet, in the form of an anti-teachers-union measure backed by billionaire-funded lobby groups and pushed by Democratic lawmakers.

This January, the corporate lobby groups Advance Illinois and Stand for Children attempted to bum-rush an anti-teacher bill through the Illinois legislature. They were rebuffed by a joint mobilization of CTU and the two statewide teacher federations.

With Senate Bill 7, however, the lobbyists brought a more sophisticated strategy this spring. The teachers unions were invited to negotiate the bill at the Capitol, together with the corporate lobbyists and the bill’s author, Democratic State Senator Karen Lightford, who chairs the Senate Education Reform Committee.

These negotiations proved to be a lion’s den, in which CTU and the state teacher federations wound up endorsing legislation in mid-April without opportunity for full review and member discussion.

CTU reversed its support of SB 7 in early May, with a resolution from the executive board, followed by a nearly unanimous vote of 600 members at the union’s House of Delegates.

But the measure had already sped through the Senate in a 59-0 vote. Soon after CTU came out against the bill, it eased through the House as well in a 112-1 vote. Democratic Governor Pat Quinn is expected to sign the bill.

Lightford’s bill does contain certain improvements sought by the unions. For example, it requires that school board members receive training on labor, education, and school finance. It also provides for “portability of tenure”—meaning that teachers who complete probation can move from one school district to another without having to start over as probationary teachers. Overall, however, SB 7 represents a broad attack on teachers’ rights, with Chicago teachers taking the biggest hit.

Among SB 7’s avid supporters is Rahm Emanuel, the new Chicago mayor, who was formerly President Obama’s chief of staff.

Emanuel has declared his intention to lengthen the school day, but has not included a commitment to increasing teacher pay accordingly. The restrictions placed on teachers’ rights to bargain and strike strengthens his hand.

A weakened union would also be less equipped to challenge another Emanuel priority: school privatization. The law would certainly undermine CTU’s plans to prepare for a strike as part of its 2012 contract negotiations.

CTU’s initial support for SB 7 reflected both the severe pressure facing teachers in a politically hostile environment and the need for better coordination among the union’s new leaders.

The leadership had sent CTU President Karen Lewis, together with attorney Bloch, to negotiate in the state Capitol. But the terms by which Lewis could make decisions in those negotiations were never made clear. As special education teacher and CTU delegate Sarah Chambers explains: “We knew Karen was at the negotiating table. But I don’t think anyone realized it was going to get signed right away.”

At the delegates’ May 4 meeting, Bloch explained how CTU had come to endorse a measure that went well beyond takeaways that the union leadership was prepared to concede. The bill’s backers had given the unions 15 minutes to review a 115-page amended bill, allowing the sponsors to slip in last-minute changes that Bloch could not catch in a hurried review.

In particular, CTU reps had never agreed to remove labor board jurisdiction over bargaining, nor to requiring 75 percent approval among all covered employees for strike authorization—an almost impossibly high hurdle for any union. (CTU had been prepared to accept a requirement for 75 percent approval by voting members.)

Tensions ran high initially. But Chambers, who helped organize the vote reversing CTU’s position on SB 7, said that the corrective did not represent a loss of confidence in Lewis or the CTU leadership. “Most people realize the pressure we’re under,” she said. “They realize that Karen fought tooth and nail” against the corporate lobbyists.

Debby Pope, a 21-year history teacher and a member of CTU’s executive board, believes that SB 7 would have passed the Senate with or without CTU’s endorsement. “All of us feel sure of that,” she said. “It’s the political climate. Look what’s gone on in the states around us.”

But Pope also thinks it important that CTU oppose such measures, just as workers resisted fiercely the anti-union legislation that passed in neighboring Wisconsin.

What happens next? With the bill's momentum hard to stop, CTU is now working with legislators on a "trailer bill" that will seek to remove some of SB 7's most egregious rights takeaways.