How Do We Stop Workplace Fatalities? Eliminate the Hazards 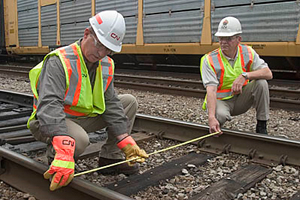 A fatal rail tragedy in Longview, Washington, last month exemplified all that is wrong with “behavior-based safety” programs that blame workers for their own injuries.

An engineer and a conductor-trainee on the Burlington Northern, along with a contract van driver, lost their lives March 23. A BN conductor was critically injured as well when the van carrying the workers crossed the tracks and was hit by the train.

Burlington Northern Santa Fe, like the other major rail carriers, spends millions on safety programs that focus on worker behavior rather than eliminating hazards. As a result, blatant hazards like the ones at the Longview accident scene continue to go unrecognized and unabated.

In light of egregious corner-cutting that leads to catastrophes like last year’s Massey mine disaster, management’s attempt to shift blame to workers for lower-profile injuries and deaths is often overlooked. These incidents occur every day: the AFL-CIO’s annual “Death on the Job” report says 4,340 workers were killed at work in 2009, the latest year for which figures are available. That’s 12 a day. Unions are holding events worldwide today, Workers Memorial Day, marking the deaths.

After the deadly Washington state incident, management quickly issued a “safety briefing,” pointing to various worker behaviors as the cause of the tragedy. The briefing said another train crew working the yard left the hind end of their train too close to the crossing. It then suggests that the crew members in the van could also be complicit.

While these “safety briefings” can be useful in helping us understand who did what, by themselves they are worthless in preventing future accidents. We know that in most accidents, someone may have made a mistake. But what is far more helpful is to determine why the error was made.

Chronic short staffing, round-the-clock “extra boards” that allow for no fixed schedule, and a lack of time off work result in crew fatigue. A lack of safety appliances, a hazardous work environment, poor training, and low morale all contribute to accidents. A real commitment to ensuring employee safety would primarily depend on eliminating these factors—which is to say, eliminating hazards.

Looking at safety this way puts the Longview incident in a different light. Most important is the crossing itself. The road is used regularly by railroad crews and crosses a busy two-track mainline, used by 70 freight and passenger trains a day. The speed limit for passenger trains is 79 mph, and 50 mph for freight.

The double main is on a curve that limits visibility from the crossing, and the area is often foggy or drizzly. Approaching trains are not required to sound a warning. There are no instructions as to how trains must approach the crossing. There are no warning lights flashing nor bells nor any other device to alert vehicle traffic that a train is approaching. There’s just a stop sign.

“It’s one of those crossings you just hold your breath going through, it’s so blind,” said Robert Hill, a member of Locomotive Engineers (BLET) Division 758.

Had this been a public crossing, the Federal Railroad Administration would no doubt have mandated better protection. But since the crossing is a private one for railroad workers, closed to public traffic, the railroad saw fit not to spend a penny on protecting it.

Whistle alerts, gates, flashers, bells—just one of these simple improvements could have easily prevented this tragedy. But the company—and all-too-often its union partners—have been blinded by the logic of behavior-based safety. A glaring, obvious danger like the Longview crossing becomes invisible.

Sadly, this mindset has cost many brothers and sisters their lives and limbs on the railroad these past few years, from Selkirk, New York, and Riverdale, Illinois, to Langhorne, Pennsylvania, and Wilmar, Minnesota.

On Mother’s Day 2009, Jared Boehlke was killed while working alone in a rail yard in Selkirk. He was working a remote control operations job which had recently been reduced to a single operator. He was working out of craft at the time of the accident, changing a broken coupler knuckle, a device that connects the rail cars together, after being ordered to do so by the company.

The job has been traditionally done by car inspectors, but the carrier had eliminated numerous car knocker jobs so there were none available to perform the task. Boehlke was killed when the cars rolled into him while he was making the repair.

Within days of the tragedy in New York, a railroad signal maintainer was killed in Pennsylvania when a semitrailer cut the turn too sharp and killed him. Ironically, he was repairing a crossing signal that had been damaged earlier in the week by another truck that had done the same thing. Had the maintainer been provided with another worker to direct traffic, this brother would not have been killed.

The simple fact remains that we are human beings. We are imperfect and prone to making mistakes and miscalculations, and sometimes fail to recognize potential hazards. We need safety programs that don’t just attempt to perfect our behavior but focus on underlying factors and hazard elimination as well.

There is an additional ironic twist in the Longview tragedy. The driver of the crew van, hired to transport crew members, worked not for Burlington Northern Santa Fe but for a contractor, non-union Coach America. Before all these jobs were contracted out by the railroads in a cost-saving maneuver, it was our union brothers and sisters—railroad employees—who transported the crews.

These were permanent, stable, career jobs, and now they’re filled with high-turnover employees, working for peanuts, who may not be qualified. If the company wants to “improve the quality of crew van driver training,” as it stated in its safety briefing, it could start by moving this work back in-house.

Why does any company neglect to provide a safe work environment? For one thing, it can be cheaper to hold a safety training than to fix the infrastructure—much less to hire more workers so that no one has to work fatigued or work alone.

Shifting the blame for accidents and injuries away from the company and onto individual workers can help to save the rail carriers money in lawsuits and damages. It invariably leads to underreporting of workplace injuries, another benefit to employers looking to show a good safety record.

Perhaps most insidiously, these behavior-based safety programs blind the employer—and sometimes workers, too. The programs are so geared toward workers’ behavior that they prevent us from seeing hazards. The belief is that “all accidents and injuries are avoidable” if workers would just follow the rules (which coincidentally serves the interests of the company).

The solution is to fix the hazards, not blame the victims.

Ron Kaminkow is a member of BLET Division 51 and general secretary of the cross-union reform group Railroad Workers United.