Wisconsin Diary: ‘A Fantastic Tale for a Winter’s Night’ 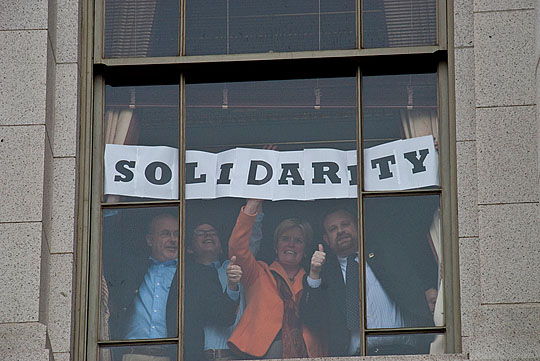 When the workers in Wisconsin rose up, I was as surprised as everyone else. I did not see this coming. I doubted we were capable of it. Now I know.

Every evening is a winter carnival, every noon a “power hour.” Like a kid at Christmastime, I trundle to the Capitol Square to see what cousins and aunts and uncles have turned up, as if from nowhere.

One day it’s the building trades, another the Teamsters or the Letter Carriers. First the teachers raised the alarm, then we were all sleeping in the Capitol in turns. Finally the police joined the sleep-in. The governor brings in his supporters through a secret tunnel.

One cold, dreary Sunday I walk through a freezing rain to the Capitol. Inside, it is a community living room. On every floor, many hundreds are talking to their neighbors. In normal times, we would all be watching TV on a day like this. Instead, we are learning from each other and enjoying each other.

Every once in a while, there’s a diversion. Three people in giant inflatable deer heads walk past, “It’s not about the doe, it’s about the herd,” their sign says.

The feeling of Mardi Gras prevails. It’s an upside-down world where the common workers lead, and the first become last. Picket signs with insults toward the governor multiply, like “The Gov Who Kicked the Hornet’s Nest.” What are the rallies like? Cold. Hilarious.

Keeping warm is a collective action. People pause in a store but they are not really buying, just thawing out. In lines at every sandwich shop, you can learn from a teacher behind you, who traveled hundreds of miles.

Fellow state workers watch wide-eyed as the waves crest, then jump in. They take all the buttons they can get. Scattered supervisors turn up in the crowd. The atmosphere changes subtly in the agencies.

Stories circulate in the hallways and bathrooms. Contracts are important: I lost decades of sick credit in a layoff. This bill will kill the nursing home where my mother works.

Stories, signs, and buttons begin to refer to strikes and general strikes. Some who have studied history say it can happen that the boss will beg the workers to come back. To this Gen Xer, it sounds like a fantastic tale for a winter’s night.

But it seems just barely possible it could break out at this moment, too.

Barbara Smith is a member of AFT Local 4848 and an energy efficiency specialist for the state of Wisconsin.

A version of this article appeared in Labor Notes #385, April 2011. Don't miss an issue, subscribe today.
Related
Teachers and Public Workers in Argentina: Four Months of Strikes and Pickets »
How Milwaukee Teachers Beat Back Cuts and Busywork »
Viewpoint: Unions Are Class Organizations, and Should Act Like It »
Iowa’s New Union-Busting Bill Is Worse Than Wisconsin »
Organizing Is the Key to Surviving Friedrichs »