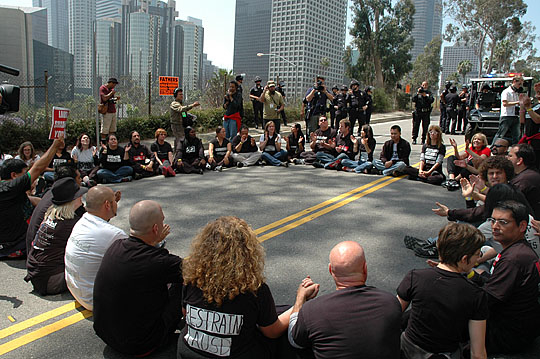 About 50 LA teachers were arrested in 2009 as they protested layoffs that would balloon class sizes. The action was propelled by organizing at schools like Dorsey High, where activist teachers were breathing life back into the union chapter. Photo: Kim Turner / UTLA.

When the Los Angeles school district announced that Dorsey High School was subject to takeover by a corporate charter company, the Dorsey community was ready to fight.

Immediately, a team of teachers, students, and parents distributed 5,000 flyers—starting at our school’s enormously well-attended Friday football game and spreading out into the community that weekend. “This is about your child’s future,” said the flyer, inviting people to a “major community meeting” to “help us come up with our fightback strategy.”

Dorsey teachers were ready to fight to save our school because we had already spent several years building our union chapter and community organizing through Progressive Educators for Action (PEAC), an influential rank-and-file caucus in the 40,000-member United Teachers Los Angeles (UTLA).

Located in South LA, Dorsey crowds 1,700 students into a school built to serve 1,000. Fifty-six percent are African-American and 44 percent Latino, and most are poor enough to qualify for free or reduced-price lunches.

Until four years ago the union chapter was inactive: meetings rarely took place and the chapter had no genuine relationship with parents and community members. We decided we needed to get organized.

Sherlett Hendy is a PE teacher, varsity basketball coach, and lead teacher in one of Dorsey’s Small Learning Communities. A Dorsey alumnus and lifelong community resident, she has served as a mentor to hundreds of students over the years and formed long-term relationships with parents and community members.

Noah Lippe-Klein is a history teacher who had been doing community organizing with a parent/student/teacher organization called Coalition for Educational Justice and had contributed to building PEAC.

We knew we had to replace the union chair, but we wanted to do it by building a new leadership layer in the chapter, one with a social justice vision of getting teachers and parents organized.

We sought out potential leaders who believed in the vision and who had roots in the community and the school—a new leadership core that was majority African-American and Latino.

Through lots of meetings at coffee shops and at our homes, we built a consensus for what a bottom-up, activist union chapter should look like.

We won the chapter chair election, formed a steering committee, and asked its members to build relationships with parents, work on teaching conditions and improving instruction, and draw connections between our school site issues and the union’s district-wide and statewide actions.

We formed strong relationships with parents and community, leading to a coalition called Dorsey Family United. DFU led a campaign for better funding at Dorsey, aimed at improvements such as smaller class sizes, more counseling staff, and maintenance of bathrooms.

We supported a student-run chapter of the Coalition for Educational Justice (CEJ) on campus, which joined the struggle against district-wide cuts. We supported the successful fight against privatization at one of our feeder elementary schools. We fought proudly against budget cuts and layoffs—PEAC initiated and UTLA sponsored civil disobedience to protest layoffs of teachers and counselors.

Over these months, the teachers learned to trust their allies’ ability to lead. Students and parents responded to this trust by taking their own initiatives.

For example, after last November’s announcement that Dorsey was on the bid list, CEJ student leaders met with the principal to think through ways to inform every student what it would mean to be given away to a charter company. They created a student-led information campaign including student-made buttons and a Facebook page.

Our past four years of grassroots organizing, community building, and leadership development is paying off now that Dorsey is on the list for potential private takeover.

Our community forum this January drew 250 parents, students, teachers, administrators, and alumni to address the privatization threat facing Dorsey and three other area schools. The impressive turnout came from hundreds of phone calls by teachers to parents.

At the forum, we followed a presentation with break-out sessions—one for each targeted school—where attendees could start envisioning actions. The break-out groups were then incorporated into school site organizing committees at each school.

The committee at Dorsey involves 40-50 people who meet every Thursday after school in the Dorsey library. It also includes various Saturday or evening meetings for working parents. The committee is now envisioning the kind of school we want Dorsey to be, after which we will write a plan to submit to the district within the competitive bidding process.

The committee will organize for a strong—if non-binding—community vote supporting its plan. To prevent the school board from giving Dorsey to a charter company, we will use local media, gain the support of longtime civil rights organizations in the community, and prepare for a powerful and massive mobilization. We are campaigning jointly with the other three affected schools in our area.

Even if our plan prevails at the school board, we recognize that neither Dorsey nor the school district has the resources necessary for the visionary school we want. Yet the anti-privatization struggle provides a much-needed opportunity for community engagement and empowerment.

New leaders are emerging every day who are committed to the fight to improve Dorsey and who connect our fight to a much larger agenda for quality public education.