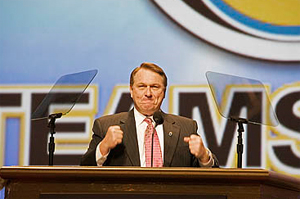 Teamster officials in the James Hoffa, Jr. administration tried to bribe election opponents into supporting the Hoffa slate, according to the federally appointed supervisor of Teamster elections. Photo: Jim West.

Teamster officials in the incumbent James Hoffa, Jr. administration tried to bribe disgruntled former supporters and election opponents into supporting the Hoffa slate, according to the federally appointed supervisor of Teamster elections. Hoffa aides offered jobs and pensions funded by Teamster dues, according to the January 20 report.

“Teamster dues should be used to fight for Teamster members,” said reform candidate Sandy Pope. She is one of two candidates running against Hoffa for general president in the fall election.

The charges were leveled by the campaign of Fred Gegare, an international vice president formerly aligned with Hoffa who is also running against him. The attempted briberies happened last spring, and involved Teamster officials who are now members of Gegare’s slate.

Fred Zuckerman, the IBT carhaul division director, said he was offered a job and pension plan enrollment if he dropped his opposition to Hoffa. “They expected me to support the Hoffa slate and not run against him,” Zuckerman told the election supervisor. Zuckerman, who is running for central region vice president on Gegare’s slate, did not take the offer.

The attempted briberies were revealed when the election supervisor investigated the misuse of the signature of IBT trustee Henry Perry. The report (PDF) found that the Hoffa campaign used Perry’s name as an endorser without permission in a campaign fax.

BRIBES NOT A VIOLATION

Stunningly, the bribery attempts were dismissed because rules governing the election do not prohibit offering or proposing to use union funds.

While election supervisor Richard Mark found that the complaints of bribery were credible, he explained in his 30-page report: “none of the proposals proceeded beyond discussion, no funds were expended, and there is no basis to find a violation of the ban on use of union resources.”

“The conduct revealed in this investigation” the report noted drily, “reflects a culture, or mind-set where elected union officials do not clearly distinguish between their fiduciary responsibilities to the union and their separate political objectives of achieving election.”

Rank and file members questioned why Hoffa got off so easy.

“Here he’s caught red-handed trying to strong-arm these guys that have broken ranks,” said David Kremer, a member of Teamsters Local 320 in Minneapolis, “but it seems like he didn’t get punished.”

The Gegare campaign and the Teamsters for a Democratic Union reform group have filed separate appeals, which will go to a special judge appointed to oversee the elections. Bribery, if found to be approved from the top of the slate, can result in disqualification of a Teamster presidential candidate. Observers say such an outcome is unlikely.

“It’s not a surprise to any of us that the Hoffa administration routinely uses union funds to advance their campaign,” said Ken Paff of TDU. “The interesting thing here is that they were caught. It would be most appropriate for them to be seriously punished.”

The report, which relies on 12 depositions, reveals an entrenched culture of horse-trading at the top. At one point, international trustee Frank Gallegos appeared to have no qualms about taking one of the jobs offered by the Hoffa administration. He didn’t, because he didn’t trust Hoffa to follow through.

Gallegos testified that a Hoffa emissary, Rome Aloise, asked him if he would consider stepping down as trustee and taking another position. “I insisted that… if there was going to be any agreement to me stepping down, that I want it in writing,” Gallegos said in a deposition. “I wanted secure assurances that, you know, I don’t lose anything.”

SPLITS IN THE HOFFA TEAM

The testimonies also leave the impression of a frantic effort by the Hoffa administration to bring ex-supporters back into the fold, to lean on them to raise money for the election campaign, and to ease those they consider unreliable off the executive board and into cushy jobs, in order to replace them with more gung-ho supporters.

Pope blasted Hoffa for focusing on politicking, jockeying for position, and personal gain in the middle of a recession that has put contracts under attack and decimated Teamster locals with layoffs.

Related
What Today's Union Reformers Can Learn from Miners for Democracy »
Viewpoint: What Message Does a ‘Vote No’ Campaign Send? »
Frustrated Over Contract, Locomotive Engineers Vote to Oust President »
Challengers Win Big in UAW Elections; Presidency Headed to Run-Off »
Every Union Contract Right Now Should Be the Best Ever »