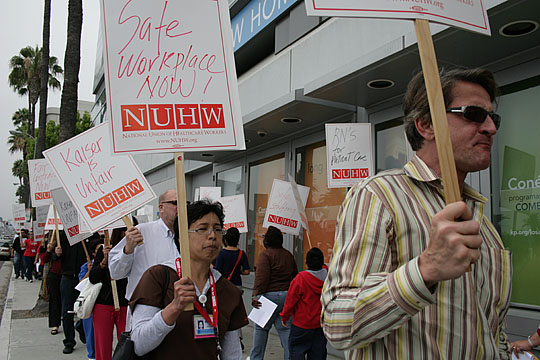 Because of Kaiser’s involvement, NUHW supporters insist they could not get a fair vote. They have asked the Labor Board to re-run the election. Photo: NUHW.

Technical and service workers at Kaiser Permanente’s 331 California hospitals and clinics have voted to remain part of the Service Employees’ (SEIU) third-largest local, United Healthcare Workers-West. The vote, counted October 7, was billed as the most expensive union election ever.

The vote is a major setback for NUHW, the breakaway union formed by former leaders of SEIU-UHW after the local was placed in trusteeship in January 2009.

SEIU poured millions of dollars and hundreds of out-of-state staff into the effort to fend off NUHW, warning members that they were putting everything at risk if they chose to leave.

Kaiser eagerly played its part in SEIU’s fear campaign, illegally withholding raises for a group of professional workers who had already left SEIU for NUHW, targeting NUHW supporters for discipline or dismissal—sometimes with the active cooperation of SEIU officials—and routinely shutting down the few public spaces where NUHW supporters could campaign inside Kaiser facilities.

Kaiser’s move to withhold raises and benefits from NUHW members in Southern California set the tone of the election, said Roy Chaffee, a call center worker in Vallejo and co-chair of NUHW’s campaign.

“Most people couldn’t get past the fear,” Chaffee said. “Unless they saw something from a government agency saying clearly and plainly that you weren’t going to lose anything, they weren’t going to take any chances.”

In early October the National Labor Relations Board requested an injunction against Kaiser for denying the Southern California members their raises and benefits. With a hearing set for early November, the move came too late to impact the election.

While the voting procedures don’t allow for a facility-by-facility breakdown, it’s clear that where NUHW had strong worksite organization its member-to-member organizing was effective at countering the fears SEIU raised and in cutting through the blizzard of mailers and phone calls.

“When you had an in-depth one-on-one with someone and they made up their mind, they stayed solid,” said Lisa Tomasian, a radiology technologist in Santa Clara. “But getting to everyone was a problem.”

Where worksite networks were weak, or had frayed after 18 months under trusteeship, NUHW was overpowered by a combination of incumbency, money, and insecurity.

Because of Kaiser’s involvement, NUHW supporters insist they could not get a fair vote. (It is illegal for an employer to assist one union over another in such an election.) During the campaign they filed a federal lawsuit against Kaiser and now have asked the Labor Board to re-run the election.

SEIU’s strong showing among service and technical workers at Kaiser pushes NUHW members’ quest to re-assemble their former local years into the future.

But there was no talk of throwing in the towel.

“What’s the next step? That is what folks are asking,” Chaffee said, describing meetings held after the vote count. “There wasn’t even a thought of stopping or letting things go.”

Although Tomasian hopes the Labor Board will re-run the election, she also takes the long view, noting that the Kaiser contract expires in 2012.

Tomasian and Chaffee are both focused on the upcoming election for almost 2,000 Kaiser professionals in Northern California, where ballots were mailed October 18 and will be counted November 10. NUHW leaders anticipate a series of smaller hospital elections to be scheduled by the Labor Board in coming months, and vow to continue organizing non-union workers as well.

How NUHW will marshal the resources for this protracted campaign remains an open question. External support from past allies like UNITE HERE or the California Nurses Association would jeopardize those unions’ respective peace treaties with SEIU.

And until NUHW can settle contracts for the 5,000 workers who have joined the union since 2009, it can’t count on steady dues income. Bargaining is a task made more difficult by the expectation NUHW has cultivated that it will deliver better standards than SEIU.

WHAT HAPPENS TO MEMBERS?

Tomasian is worried about members’ prospects as part of SEIU, citing new layoff announcements from Kaiser in the pharmacy and among medical transcriptionists. She expects Kaiser to demand mid-contract health care concessions next spring, after a labor-management commission put in place as part of their last contract releases its recommendations.

It’s unclear how NUHW activists at Kaiser will contend with SEIU-UHW going forward, or what plan SEIU has for building unity after drawing such sharp lines in the October vote. NUHW supporters have either been removed from their steward positions by SEIU or have resigned.

“Folks don’t want to have anything to do with SEIU,” Chaffee said. “But if I’m the best rep in my area and if there is injustice happening, how do I handle it? How do you act like the union when the union won’t do it themselves?”

Tomasian expected an informal system of grievance handling to continue. “When members can’t get movement from the union, they know who to go to to get things done,” she said.

SEIU’s push to lower members’ expectations and stoke insecurity won the vote, but that platform won’t build a strong union. Nor will it beat back looming concessions. Because NUHW is the only union in the picture that’s talking about building rank-and-file power to deal with hostile employers, don’t count it out.

A version of this article appeared in Labor Notes #380, November 2010. Don't miss an issue, subscribe today.
Related
Chicago Health Care Workers on Strike for Safe Staffing, $15 Minimum, PPE »
Why and How SEIU Members Are Calling on Our Union to Expel Cops »
Twin Cities Janitors and Guards Feature Climate and Housing in Their Strike Demands »
Eight Thousand Hospital Workers Strike in Seattle »
Privatizers Said It Was Impossible for Chicago Teachers to Strike. How Wrong They Were. »