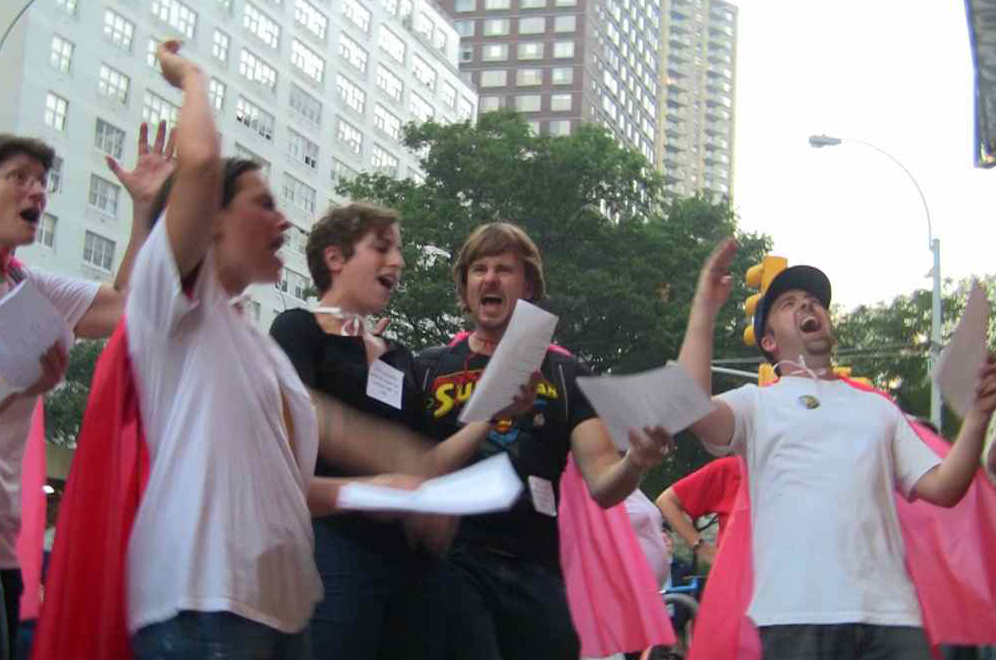 Davis Guggenheim, director of the influential global warming movie “An Inconvenient Truth,” has released a documentary about schools, “Waiting for Superman,” whose ambitions are equally powerful.

Audiences have been moved by the film. The media have fawned, with NBC, ABC, and Oprah lavishing attention on its ideas for better schools.

President Obama received the children highlighted in the film along with “Superman’s” producers in the White House, while Education Secretary Arne Duncan praised the film as a “Rosa Parks moment.”

“Superman” seeks to win millions of Americans to the cause of education reform, as the corporate sector and Obama’s education policymakers have come to define it. Duncan pins school performance on teachers, who are blamed for the problems in schools and held accountable for achieving better results—as measured by standardized tests that are widely criticized for measuring learning poorly and for narrowing students’ focus to fill-in-the-bubble.

Rising test scores can mean a raise or a bonus for the teacher, while declining scores can mean losing one’s job. The strategy strongly favors privately run charter schools over public schools. It also means reducing the power of teachers’ unions, or, ideally, eliminating them altogether.

‘Teachers have been outraged at the one-sidedness of the movie. It gives the impression that the failure in public schools is the fault of teachers or unions.’

The film makes its case emotionally and effectively by focusing on the aspirations of five children and their loving parents. The children are mostly poor and people of color. Their families see public schools—which the film portrays in the starkest terms—as barriers to their dreams.

The parents try to enroll their children in charter schools with reputations for success but limited slots that are filled by lottery. In the film’s climax, the applicants wait anxiously for their lucky numbers to be called. Will the dreams of these sweet and hopeful children be denied?

“Superman” connects with righteous values: everyone wants better schools, and every child should have opportunities regardless of race or economic status.

But the film is deceptive, says Julie Cavanagh, an 11-year special education teacher in Brooklyn and active with the Grassroots Education Movement, a coalition that works for quality public education.

Says Norm Scott, who recently retired after 35 years teaching elementary school in New York City: “Teachers have been outraged at the one-sidedness of the movie. It gives the impression that the failure in public schools is the fault of teachers or unions.”

With the media and politicians blaming teachers, and the unions eager to please even virulent opponents, what might a better vision of school reform look like?

“Of course, that includes representing teachers and their interests,” he says. “But also, much more deeply, it means representing the interests of the communities that we serve.”

PEAC activists want to make schools relevant to students’ lives and the needs of their communities, while also demanding respect for teachers as workers.

Rather than schools run by unaccountable corporate boards and charter companies, as promoted by billionaires like Bill Gates, Caputo-Pearl envisions “public management” of schools through coalitions of parents, students, and teachers.

He sees unions as essential vehicles to develop these alternatives. But the unions have to lead school reform by organizing with allies for power.

“The teachers unions collaborate for school reform from a position of weakness,” he says. “We have to actually organize on the ground to create a foundation for true reform.”

I'd like to share a letter I wrote to my union, the Broward Teachers Union. I think it represents a type of cajoling that I think needs to be directed toward unions in these very troubling times.

I would like to ask the executive board to consider a new strategy for achieving our desired step, raise, and contract. That strategy involves framing our situation in an entirely different manner.

Such a strategy would begin by pointing out that what we are experiencing is a crisis of capitalism. It is the 800pound gorilla in the room that no one seems to get around to mentioning. We should point out that struggles of teachers in Greece, Spain, Portugal, the UK, France, Kansas City, Chicago, Detroit, etc, are struggles against the exact same thing, and make the connection between the credit default swap/derivative driven real estate bubble, and the after effects, which we are all now experiencing. We should point out the fact that real estate prices are still falling and homes are being foreclosed upon in South Florida, so our situation, along with the situation of all working-class people, will most certainly be worse next year. Bankers get bailed out, and then get multi-million dollar bonuses, and teachers together with all other working class people, pay for the crisis. This is class warfare, and we should call it what it is.

These are shocking words. It would certainly be shocking if the BTU were to annunciate these truths in such an honest and forthright manner. It would no doubt shock the Broward County School Board, and the Democratic and Republican parties, and most importantly, it would shock the capitalist class. It would probably shock them all sufficiently into cooperating to do whatever is humanly possible to pacify and mollify us, to get us to retreat from such a bold and principled stand.

At the Oct 18, impasse protest rally, some of us showed up with a banner that proposed this strategy. It said, “No Step, No Raise, No Solutions Under Capitalism, Think Outside the Box!” We were trying to communicate that strategy to the rank and file. I was very disappointed by the fact that we were approached by Brother Santeramo, in a very unfraternal manner, with the demand that we put the banner down. Now, I believe that the union should be an unconditionally democratic institution, and that the rights of individual members to articulate their point of view, must always be defended.

Unsolicited though they are, I offer you my views as a rank and file member of the BTU as to how we should proceed. We should recognize that everything capitalism can do for us has already been done. We have some great difficulties ahead of us, and there is a very important role for unionism in these uncertain times. Some of us are of the belief that we must organize an industrial democracy if civilization is to continue to progress. This would demand a new and far-reaching mission for unionism, together with an accompanying working class political movement.

This work of which I speak, has already begun. Dan LaBotz, a 64-year-old teacher from Cincinnati, co-founder of TDU, author of the book, A Vision From the Heartland, is carrying on a credible campaign for the US Senate under the banner of the Socialist Party. Please see this very interesting video in which he compares the modern corporation to the plantation system of the 1800’s. http://www.youtube.com/watch?v=zVczWEL3uN4 Similarly, Rich Whitney in Illinois is running an excellent campaign for Governor under the banner of the Green Party. Rich who in his last campaign in Illinois, got 10.5 % of the vote in the gubernatorial race, and established the Green Party as an official party in the state, has as a very interesting plank in his platform, “Make corporations accountable and encourage other forms of business ownership. Use the power of eminent domain to reclaim and re-tool abandoned facilities under community or worker ownership.” Whitney has actually been able to participate in at least one of the debates with the Democratic and Republican candidates, and he demolished them. Whitney was formerly editor of, The People, the newspaper of the Socialist Labor Party, a long time advocate of Socialist Industrial Unionism, the same program advanced by the Workers’ International Industrial Union, of which I am also a member. Locally, we have Ernest Malhot of the Socialist Workers’ Party running for city commissioner in Miami. We should take a close look at the principles of the WIIU, as well as the campaigns and messages of LaBotz, Whitney, and Malhot, and begin to build a transformational industrial union movement and an accompanying political movement here in Florida that advances similar propositions. This could be done through the Socialist Party, or the Green Party, or through independent campaigns, or ideally,through some combination of these, a united front of the left so to speak. It is an opportunity to do something that would have repercussions that would be felt around the world.

This is the strategy that I will be trying to advance among the rank and file of the BTU. I invite members of the board to join me in that endeavor. We would certainly welcome you into the WIIU if you find yourself in agreement. If not today, then when the changing material conditions of existence demonstrate to you that this is what needs to be done.

In conclusion, I wish to assert to you that this strategy, and these suggestions, though undeniably radical, are also extremely practical. They are the only way for us to get what we want, both in the immediate sense, and in resonance with the long-term aspiration that humanity will continue to reap the benefits of civilization. The standard of living for US workers has been declining since 1973, even as productivity has increased dramatically. With the present crisis, we face the prospect of slipping into a dark period of industrial feudalism, Blackwater style. Ultimately, that will probably depend on whether or not unions step up to the plate and fulfill their historic mission, or if it remains business as usual.

Everyone should read this article about the myth of charter schools. It also thoroughly and concisely points out all the erroneous claims made in the film, "Waiting for Superman."

So, if you don't do anything today, READ THIS! SHARE THIS! Send the link to friends, family, your child's teacher, local school board, etc.