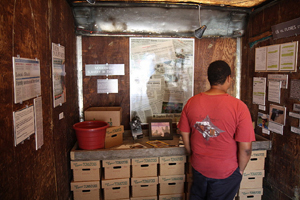 A museum-trailer traveling the Northeast reveals a look into one of most shameful secrets of the American system of food production—modern-day slavery among farmworkers. Photo: Fritz Myer.

The trailer, 24 feet deep by 8 feet wide, is muggy this early August afternoon in Manhattan. Eight of us—church ladies, iPhone-wielding denizens, curious tourists—mop our brows as we clamber inside for a look at one the most shameful secrets of the American system of food production: modern-day slavery among farmworkers.

Our guide, Romeo Ramirez, tells us straight away that the trailer, which already feels uncomfortably small, is a replica of one in southwest Florida where 12 farmworkers were forcibly kept between 2005 and 2007. Locked in at night, they had no place to relieve themselves and were forced to foul a corner of their cramped quarters. When someone fought back, he was beaten and chained to a pole. The chain and padlock, still twisted from when workers finally forced it off, rest on the trailer’s wall.

After two workers pounded a hole in the trailer’s ventilator hatch large enough to squeeze out, they found a ladder and extricated the rest. Their escape began the seventh of eight prosecutions for involuntary servitude among U.S. farmworkers since 1997. (The eighth indictments, involving dozens of Haitian nationals victimized by trafficking, were announced last month, two days after Independence Day.)

Almost all of the cases were uncovered by the tour’s host, the Coalition of Immokalee Workers (CIW), whose pioneering campaigns against Taco Bell, McDonald’s, and other fast-food giants have led to agreements that pull tomato-pickers’ wages up by one penny for every pound picked, which can boost daily wages from about $50 to $85.

But while the coalition can boast of some success in challenging corporate titans that control the food supply chain and in improving conditions in some of the biggest tomato fields in Florida, a steady drip of federal criminal cases over slaving makes it clear that the industry is plagued by structural problems that result in horrendous abuse.

As the small pamphlet handed to tour-goers spells out, forced labor is nothing new in American agriculture. From the descendants of Africans who transformed Florida into a kingdom of cotton and sugar in the mid-1800s to the managers at US Sugar indicted in 1946 for holding farmworkers against their will deep within the Everglades, a long and painful history precedes the thousand or so farmworkers freed from involuntary servitude in the last decade in Florida.

Even the tactics managers use haven’t changed over the decades, said Ramirez, who’s worked in the Florida fields since 1996. Just like US Sugar, several of the recently convicted slavers had armed guards watching over the workers’ camp, which is typically far from town so that escapees have nowhere to go even if they find a way out.

In the worst cases, the workers’ whole existence depended on supervisors or contractors, who were masters at keeping workers in both physical and economic bondage, deducting money for food and garden-hose showers ($5 each) from paychecks. Others plied the homeless from shelter job programs with promises of steady work, only to feed them alcohol and drugs and trap them in a cycle of debt and addiction. One boss took away workers’ shoes at night so they wouldn’t run.

The first prosecutions in recent years resulted in light sentences, around three years in jail, because district attorneys had to use laws from the post-Civil War era, when human bondage wasn’t a settled issue in the South. Federal lawmakers responded by boosting penalties, so that a 2008 case resulted in 12-year sentences for ringleaders. But whatever the penalty, the pressures—and the profits—of the corporatized food system keep producing farm bosses and contractors who ensure their labor supply with force if they have to.

Janice-Marie Johnson winced as she examined the tour’s centerpiece, a worker’s shirt bloodied in a savage beating, which sparked a protest that became the CIW’s foundational moment.

“All I can think is, they did it again,” she said, detailing a family history of relatives exported from Jamaica against their will to dig canals and plant sugar cane and tobacco across the hemisphere.

In town from Boston, Johnson said the tour challenged her to return to her work at the Unitarian Universalist Association not just to share the horrors of the experience with others but to impress on them a new urgency for action.

Ramirez had a few suggestions on that score. “We’re not here to play victim,” he said, “we’re here to find solutions.”

He noted through a translator that the CIW’s agreements have enabled it to make substantial changes at some of the biggest fields, not just by boosting wages at some suppliers but by giving CIW organizers access to workers on the job for the first time. There, they’ve been able to win improvements, including tents that shade workers on their breaks, and an agreement that workers no longer have to overfill the 32-pound bucket to earn each token they redeem for pay at the day’s end. Filling to the brim, now, is OK.

Seeing these small but noticeable improvements every day adds to the coalition’s momentum, he says, and strengthens the campaign as it enters a crucial phase. The next targets—major grocery chains like Kroger and Publix—are dominant players in the tomato market.

Julia Perkins, a staffer with CIW, said the coalition thinks the grocery corporations are vulnerable to pressure because they market themselves as community-minded, attempting to forge a bond with consumers and ensnare them in a lifetime of loyal shopping.

And as Kroger remains mute on the coalition’s demands, and Publix desperately seeks “independent” assessment of field conditions—rather than talking to the people who might know something about that, the farmworkers themselves—Perkins is confident that like the fast-food giants, grocers will see the public mood turn against them.

Both Kroger and Publix, she notes, were still purchasing tomatoes from suppliers implicated in slavery cases in recent months.

Related
Spring of Discontent: Mexican Berry Pickers Strike for a Bigger Share of Profits »
Viewpoint: Abolish the H-2A Program! »
Trouble in the Tulips: Organized Farmworkers Win Basic Demands in a Quick Strike »
Mexico’s Only Independent Farmworker Union Struggles On Despite Obstacles »
Billionaires Can Have the Cosmos—We Only Want the Earth »