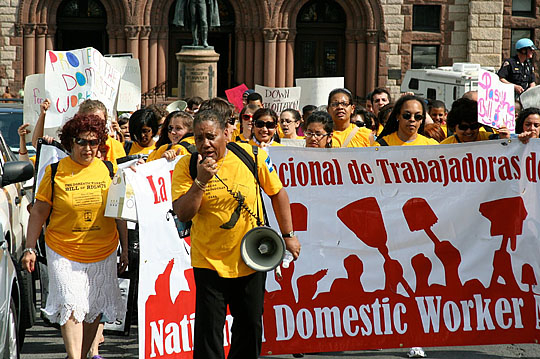 New York legislators passed a Bill of Rights for domestic workers that would require employers to provide overtime pay, workers comp, and at least one day off each week. The victory is a blow at domestic workers’ exclusion from federal labor protections. Photo: Scott Lu.

Domestic workers in New York have won historic changes to the state’s labor law to include protections for their jobs. Final votes on Thursday ended weeks of wrangling between state Assembly and Senate leaders and Governor David Paterson, who said he would sign the bill.

The law guarantees domestic workers time-and-half pay for more than 40 hours and a day off each week, along with protection under worker compensation and anti-discrimination law and access to unemployment insurance. The compromise bill won’t include original demands for paid sick and vacation days and advance notice of termination. But three paid days off were granted after a year of service.

Domestic workers and advocates have been holding their breath since June 1, when 100 domestic workers and allies from around New York City traveled a well-worn path to Albany for a vote on the Domestic Workers Bill of Rights. The housekeepers and caregivers who tend to the children and homes of New York’s well-to-do had made this trip countless times in the last six years, coming face to face with lawmakers to campaign for basic protections on the job.

Promised votes that never materialized had disappointed them many times before. But on that night, after hours of worker testimonies and a few stories from state senators about the domestic work their mothers and grandmothers did, the Senate—at long last—voted 33 to 28 in favor of the bill.

“It was an incredible moment of validation,” said Priscilla Gonzalez, director of Domestic Workers United, the organization behind the bill. “We started six years ago by walking into legislators’ offices and educating them. Now we found ourselves witnessing senator after senator thanking these immigrant women of color who had been invisible for so long.”

The biggest stumbling block appeared to be outgoing Governor Paterson. While he reaffirmed the pledge of support he made for the bill on a radio show last year—acknowledging the historical exclusion of domestic and farm workers from labor law protections as racist—he approached the bill cautiously, at first issuing a statement denying he supported it. After the Senate and Assembly approved the compromise version Thursday, with three Republicans joining all 32 Democrats in the Senate, Paterson announced he would sign the bill.

The law also calls on the state's Department of Labor to study the feasibility of collective bargaining for domestic workers and issue a report by November.

Domestic Workers United has much to celebrate in coming this far. DWU, founded in 2000, estimates that at least 200,000 people in the state—mostly immigrant women from Africa, the Caribbean, and Latin America—work in other people’s homes as housekeepers and live-in caregivers.

While some caregivers report decent working conditions with warm families and children they adore, others have to live with over-demanding bosses, and organizers have heard (and experienced) every horror story imaginable, from sexual assault to sewage-filled basement living conditions, abuse both physical and emotional—a litany of violations against basic human decency.

Even the not-so-bad situations can take a turn. Domestic workers report not being compensated for long trips, having to work while sick, and being let go without notice.

“A lot of times when you’re sick and can’t get up and go to work, you still get up and try to go, because you know you won’t get paid or they will replace you,” said Merilyn Blackett, an immigrant from Trinidad and Tobago with six years at DWU and nine years as a care provider for the elderly.

Arranging her own medical care has been difficult, too. Unable to get appointments during off hours, Blackett said she’d have to decide between getting paid or seeing her doctor.

Blackett and other determined workers met in 2004 to spell out what they wanted to see changed at work, giving birth to what would become the Bill of Rights.

Domestic workers planned daily events in front of the governor’s office the week of June 14 to insist he sign the bill. Organizers burned through call lists and invited out prominent friends like the feminist leader Gloria Steinem, friendly legislators, labor leaders, and other allies gained during a decade of organizing.

Gonzalez said she expected legislators to prepare a compromise between the two bills, but argued for the strongest possible provisions. “Sick days and holidays are things that domestic workers on their own would not be able to negotiate—the power balance with the employer is too great,” she said. “We’re not asking for anything more than anyone else gets—we’re asking to get onto equal footing with other workers.”

Not everyone’s in support. Comments on news articles online show that for some employers, the bill hits a raw nerve. Gonzalez said some lawmakers fear the precedent this bill would set for domestic workers in other states and other groups of excluded workers—like farm workers.

DWU offers them no illusions: with their allies, they intend to run with the precedent as far and fast as they can.

DWU’s work is being replicated in other states through the National Domestic Workers Alliance, an organization of worker centers, immigrant rights groups, and domestic worker cooperatives that grew up out of the 2007 U.S. Social Forum in Atlanta.

Blackett said when she first got involved in DWU, after a friend encouraged her to attend a monthly meeting, “we were just thinking about mobilizing the domestic workers in New York City.” After DWU members went to Atlanta, she realized there were many other domestic workers they could help if they prevailed at home.

Domestic workers and their allies in California and Colorado are drafting their own bills of rights to introduce in their state legislatures. Organizations from the Bay to LA are collaborating to introduce a bill next year. They’ve produced a detailed survey of conditions, won the support of the San Francisco City Council, and gained a hearing on domestic worker conditions with the state legislature’s labor committee.

At the U.S. Social Forum in Detroit in June, the national alliance and a host of organizations planned a multi-year campaign to change federal labor law to cover all domestic and farm workers.