After a Year on Strike, Vale Inco Miners In Ontario Take Their Lumps 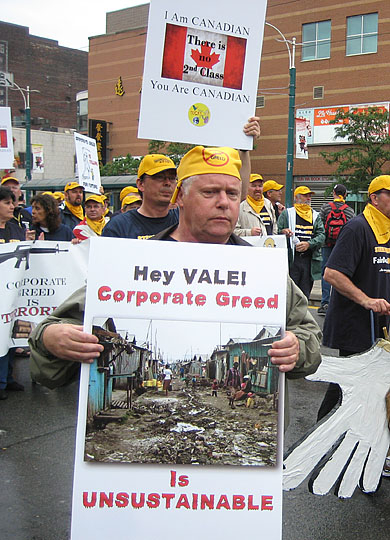 In June, striking Vale Inco miners picketed the G20 Summit meeting of world economic leaders in Toronto. But after nearly a year on the picket line, corporate intransigence won out. Photo: USW Local 6500

Steelworkers at Ontario’s Vale Inco nickel and copper mines took their lumps and accepted a concessionary contract one week ahead of the July 13 one-year anniversary of their strike.

The 3,000 members of USW Local 6500 voted by 75 percent to ratify a deal that included the company’s two major demands, cheaper 401(k)-style pension plans for the next generation of workers and a cap on the “nickel bonus” at $15,000.

Members received a $2,000 bonus for signing the five-year deal, along with a retirement incentive of $15,000 to $30,000, depending on seniority. Pensions for existing workers were improved, and the company dropped its multi-million dollar lawsuits against members. Nine members fired for picket line activity will have their cases heard at the provincial labor board, and members expect they’ll be reinstated by fall.

“It looks a little bit like the March contract that we burnt in bonfires,” said 36-year veteran Bernie Arsenault. “That’s the toughest pill to swallow.”

Two thousand rallied against Vale’s March offer, which members turned down by 87 percent.

Keeping up the strike took its toll. Houses and spouses were lost, and a small but noticeable portion of the workforce moved away to find other work. Frustration built as picket lines dwindled and scabs continued to produce some ore.

“There’s a lot of finger-pointing going on, but we should be mad at the company—and at the provincial government, which didn’t lift a finger,” said striker Jamie West, referring to the ruling Liberal Party’s refusal to pass anti-scab legislation.

The union didn’t escape members’ ire, too. “I don’t begrudge the bargaining committee, but I’m disappointed the contract was promoted as significantly improved when it was not,” West said.

Brazil-based Vale is primarily an iron ore supplier, and its global reach enabled it to weather up to a billion dollars in losses inflicted by the Ontario strike.

The Steelworkers sent members barnstorming across the province and throughout the world, protesting when Vale executives spoke and connecting to other unions of Vale miners.

Back in Ontario, activists defied police orders and massed to block two entrances to company property for five days in May, before the union requested they back down, citing progress in court.

Members took pride in the personal and moral victories of the yearlong battle. “Our strike has done something no other strike has been able to do,” Arsenault said. “We built global solidarity, built solidarity within our union that we never have had. People have become educated about how multinationals work and the government’s role in the thing.

“I hope we gave them a nosebleed. We’re not going to go away.”

But the mobilization was too little, too late, West countered, leaving the union vulnerable to the company’s attacks that miners were overpaid and struggling to convince younger members why they had to fight. Vale, of course, wasn’t hurting—it pulled in a $13.2 billion profit in 2008 after it snapped up Inco for $19.4 billion in 2006.

“Our problems started years before Vale bought Inco,” West said. “We relaxed and weren’t ready when Vale arrived so hard-nosed. The moment this strike ends we need to start planning, and get out into the community. We need to make sure people see us as neighbors, not some mythical beast.”