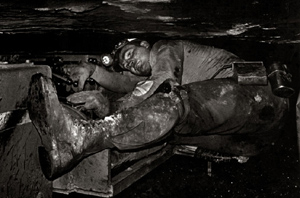 A miner operates a coal-cutting machine in a 30-inch high coal seam. Preventing environmental and economic devastation by transitioning to a low-carbon economy won't find political support if it ignores or targets those workers who happen to find themselves in the fossil-fuel economy. Photo: Earl Dotter.

“There are no jobs on a dead planet.” That’s how one union leader answered those who say that unions should be concerned only about jobs, and leave the planet to someone else to take care of.

Many unions and both labor federations hailed Barack Obama’s bold talk about solving America’s jobs crisis by putting millions of people to work in “green jobs” that would solve the climate crisis by transforming America to a low-carbon economy. Obama’s stimulus bill emphasized renewable energy and energy conservation; many unions and state labor departments have added “green” programs to their job training.

But many workers feared that the transition to a low-carbon economy would destroy existing jobs, and they wondered if anything would be done to protect the workers who held them. Some union leaders, meanwhile, worried that green jobs might be lousy jobs that would only accelerate the deterioration of wages and conditions.

If America is to find the political support for a green transition, these concerns must be answered.

Unions are right to fear that green jobs may be terrible jobs. Consider the case of General Electric. In 2005 GE launched its “EcoMagination” campaign, a marketing effort to sell products that help solve environmental problems and create green jobs. CEO Jeffery Immelt claims it’s created tens of thousands of jobs.

But what kind of jobs? Sixty-two African American employees at a GE subsidiary recently filed a racial discrimination suit over their working conditions. Their job is cleaning out “baghouses” where, under an EPA Clean Air Act mandate, cloth or synthetic filters or “bags” capture toxic particulates such as lime, coal black, lead, arsenic, and mercury.

Workers were forced to work up to 12 hours a day, often with only one half-hour break for lunch, and denied bathroom and rest breaks. Workers say they were refused requests for water or a chance to leave the 100-degree bag house and were denied adequate protection from the dangerous chemicals. Is GE offering us 250,000 jobs like that?

Green jobs programs at all levels should include requirements for labor rights and standards, with monitoring and enforcement mechanisms. Corporations that are repeat violators should be banned from green job funding.

But the most important way to protect workers is for them to protect themselves through organization. A robust version of labor rights, including employer neutrality when workers try to unionize, should be incorporated into all government contracts for green jobs. Workers alleging violations should have access to an independent tribunal that can order correction or, if violations are frequent, termination of the contract.

There are Davis-Bacon prevailing-wage requirements for the green jobs in the stimulus bill, but so far only very limited ones in the major climate bills that are pending. Such provisions can nonetheless be introduced through Project Labor Agreements (PLAs).

The Port of Oakland, California, which recently went through a major green reorganization, introduced a PLA which requires 50 percent local hiring, prevailing wages and benefits, and safety standards; recognizes unions as the sole collective bargaining representatives; and establishes a Social Justice Committee and Labor/Management Committee to administer the contract terms.

In Massachusetts, the Green Justice Coalition, which includes the Laborers, Painters, and Carpenters, is negotiating agreements with utility companies for weatherization pilot projects in several cities.

The process was set in motion in 2008 after the legislature mandated dramatic reductions in the state’s greenhouse gas emissions. The law established an advisory council to work out the details, and the Green Justice Coalition successfully pressured the council to try out a new model for home energy efficiency.

The model hires trusted community-based organizations to canvass their own neighborhoods and sign up dozens or hundreds of residents for home energy retrofits. With large numbers of jobs bundled together, responsible contractors can afford to bid, hire local residents, provide quality training, pay living wages with benefits, and provide safe worksites. The coalition, utility companies, unions, and contractors are negotiating agreements that will include wages above the prevailing local weatherization wage of $11-$17 an hour.

In Portland, Oregon, the city council has endorsed a Community Workforce Agreement for a clean energy pilot program. It requires contractors to recruit from disadvantaged local communities.

Often forgotten in the climate debate is the devastating effect on jobs that failure to halt global warming will bring. The British government’s definitive Stern Review warns of economic disruption on the scale of the Great Depression and the great wars that devastated the world in the 20th century. Many of those effects are already under way, including floods and droughts, ocean acidification, forced migrations, forest fires, crop pests, and rapid spread of epidemics.

But is it fair to put the cost of preventing such devastation on those workers who happen to find themselves in the fossil-fuel economy?

Many studies indicate that climate protection legislation will create many more new jobs than the old ones it destroys. That is little comfort for those who stand to lose the jobs they have now. As Carl Wood of the Utility Workers put it, “Workers are used to being ground up and spat out by any change in society. In the U.S. there is no safety net for the victims.”

Most of the climate protection bills currently before Congress include worker transition programs modeled on the Trade Adjustment Act program that purports to protect workers from the effects of globalization.

They provide short-term work, often at poverty-level wages, training for jobs that in many cases simply do not exist, and incentives for workers to “solve” high local unemployment by migrating elsewhere.

An effective program would address both individual workers and impacted communities and regions:

• Communities hard hit by climate protection measures should get grants for reconstruction for 25 years.

• The federal government should plan “Green TVAs” to transition entire regions from fossil to green energy.

• The government should guarantee that no worker or retiree will lose pension or health care benefits as a result of the climate protection bill, period.

A Senate bill introduced by Bob Casey and co-sponsored by Sherrod Brown includes some of these approaches. And it goes beyond the House and Senate climate bills by helping adversely affected communities develop strategic plans to rebuild their economies.

While many unions and both labor federations have embraced green jobs, they have been far more reluctant to support the actual reductions in greenhouse gas emissions that climate science says are necessary to prevent catastrophe. Yet specific, legally binding targets are essential not only to protect the planet but also to ensure that green jobs are actually created.

A recent statement by the Service Employees and the Laborers explains: “A clear science-based target will drive a massive increase in the generation of green jobs, public mass transit, renewable energy, green manufacturing, energy-efficient construction and building retrofits.”

Without binding targets, there will be few green jobs and a lot of hot air.

A version of this article appeared in Labor Notes #375, June 2010. Don't miss an issue, subscribe today.
Related
Billionaires Can Have the Cosmos—We Only Want the Earth »
Can Postal Vehicles Help Us Fight Climate Change? »
General Motors Returns to Oshawa—But Offers Only Second-Tier Jobs in a ‘Pop-Up’ Plant »
We Need a Disability New Deal, Too »
The Australian Green Bans: When Construction Workers Went on Strike for the Environment »