How Do We Win Strikes Again? 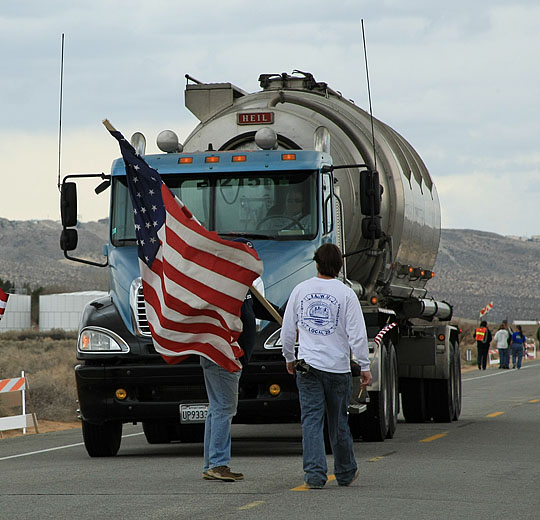 A special session at the April Labor Notes Conference brought together representatives from strikes and lockouts across the continent to consider the question: How do we make the strike a winning tool again?

The standing-room-only panel featured a hospital striker from Philadelphia, miners from Ontario, California, and Mexico, and food-production workers from Rochester, New York, on the edge of walking out.

Labor journalist Steve Early pointed to the strike’s dramatic decline—there were only five strikes or lockouts of 1,000 or more workers last year, compared to at least 200 per year in the 1970s.

Clearly, unions avoid strikes because they fear they can’t win them. How do we break this mold? We brought the question to Peter Olney, organizing director of the Longshore and Warehouse Union. In Boron, California, 560 borax miners—ILWU members—just won a 15-week lockout by their multinational employer, Rio Tinto.

But part of it correlates to a certain sense of resignation on the part of the labor movement and an unwillingness to engage in strikes. Strikes and lockouts are extremely uncomfortable for the institution. They force a huge expenditure of resources, they radically upset the routine applecart of officers’ and staff’s time and duties—so it’s something unions shy away from.

LN: How do you pull off a successful strike when there’s 9.9 percent unemployment?

PO: You have to set the strike up very carefully. You can’t get suckered out in a pure economic strike. You have to find a way to be out on an unfair labor practice strike so you have more flexibility in returning to work, and returning without permanent replacements. That’s basic rule No. 1. But so many unions walk off the cliff and do what the company wants—I’ve done it myself.

A lot of it is preparation and training. There’s a lot of discussion of heroic actions around not handling struck work or blockading trucks. The tactical part of the struggle is important, but the bottom line is you have to take care of the members. When that breaks down it causes tremendous demoralization.

You must be prepared with a strike fund or food-and-money-raising operation to take care of the workers, who are immediately destitute. People drift away and pay for the strike by crossing the picket line. Feeding the members is part and parcel of winning. It’s a lost art.

LN: What do you make of short-term strikes, sometimes called “demonstration” or “publicity” strikes, which have become more popular as the open-ended strike has become more challenging?

PO: It’s smart. You see those in the public sector or health care, where the union is required to give notice of a strike, or you have a workforce, like nurses, that are expensive to replace. Some organizations like the California Nurses Association have mastered the one- or two-day strike and use the notice of such activity to force employers to come to heel.

LN: In an open-ended strike, how do you convince people who are fearful in this economic climate not to cross?

PO: In Boron, we were locked out, so no members were crossing. But Rio Tinto was importing scabs.

Picketing is important in a strike or lockout, but the locus of the struggle may not be at the plant gate. We’ve seen how many strikes degenerate into people sitting in their lawn chairs, scabs rolling by. The battle’s over. Picketing in and of itself is not necessarily the key focus.

Because of the law and injunctions, you have limited opportunities to try on a daily basis to block scabs or prevent struck work from leaving. The best time to do that is when you have superior force—when you have thousands of people out there. But since you’re going to have limited shots at that, you’d better have a strategy that sustains your people for the long haul and figure out other ways, away from the gate, that leverage the employer.

At Rio Tinto, we had a presence 24/7 at the gates but we focused our people on going after some of the company’s legislative priorities. For instance, we stopped a federal handout of tribal lands in Arizona to Rio Tinto for copper mining. We were able to block that in D.C. It was a problem for them because of a big investment they made there.

LN: How did the union inject itself so quickly to stop that?

PO: We intervened with the representative whose district it’s in. Even though she’s a Blue Dog, she stated publicly that until Rio Tinto resolved its problem with us she wouldn’t move forward. That was very effective.

We went after them at their annual general meeting in London, we picketed the British consulate on the West Coast, in Boston, and Salt Lake City. That was important in framing the issue and keeping it high-profile. We did public activities to win the battle for hearts and minds.

The company is highly involved in legislative activity that affects their operations, and the more the public understands their true corporate character, the more vulnerable they are.

LUCKY TO HAVE A JOB?

LN: So how do you make a strike popular in a downturn, when people think anyone who has a job is lucky to have it?

PO: We claimed the moral high ground because it was a lockout. It was easy, because the employer was taking good jobs away from the community. We were saying, “end the lockout,” a powerful message that resonated in a Republican, red district, especially with politicians, small businesspeople, religious leaders.

For a strike, you always face challenges framing the issues. In our lockout, the company ran full-page ads talking about all the money they’d put on the table that we rejected. We framed the issue similar to how the Teamsters did in the 1997 UPS strike: “We’re defending good jobs for working families; they offer part-time, contingent work.”

They had proposals on the table for unlimited contracting out, for reducing hours unilaterally, and obliterating seniority protection. Seniority doesn’t fly with the public, so we talked about full-time work and respecting older workers.

LN: What isn’t working so well in recent strikes?

PO: There’s a great deal of frustration with how the press covers strikes or lockouts, justifiable frustration. We understand this is corporate media dominated by billionaires and conglomerates, so it’s no surprise it’s not pro-worker. But it does not mean we’re incapable of framing a message that resonates with the public.

LN: Do you attribute the settlement with Rio Tinto to the union’s pressure?

PO: I attribute it to some of the things we did, and to the fact that the operation is fairly skilled. The work requires particular knowledge of conditions over time. The company was genuinely desirous of getting those workers back, because the scab outfit was not up to snuff.

They were at about 35 percent of production, and the reason they were able to hang on is the inventory they built up before the lockout. As time went by they had a problem. The workforce has an intrinsic value.

PO: That’s right. This was a case with strategic workers, like the cutters in the old sewing factory—you could organize a whole factory with 20 guys.

It wasn’t a 100 percent victory, we took some hits, but like at Temple [Hospital in Philadelphia, see above], it wasn’t the hits you would have taken if you didn’t fight.

Thanks to Labor Notes for hosting a discussion of “How to Win Strikes Again?”, an interview with Peter Onley. This is the key topic facing the labor movement. Unfortunately, the interview failed to explain how to actually win strikes. For the last twenty years, the labor movement has relied on the tactics suggested by Onley, corporate campaigns and one day strikes. It’s time for labor activists to admit these strategies are not working. One day strikes and corporate campaigns are important defensive tactics in a period of union-busting. Yet, after two decade of experience they can, at most, get the worst of management’s concessions off the bargaining table.

As Richard Trumka said at a conference last week, the labor movement needs to quit thinking that not losing is winning. Today, beating back the worst of concessions is declared victory. In a very real sense that is true. Workers standing up and fighting back in this age of union-busting and decline is a victory in and of itself. And each group of strikers must pick the strategies that work for them.

Yet defensive strategies alone will not revive the labor movement. To truly win strikes, labor needs an offensive strike strategy capable of inflicting financial pain upon employers. That means a strike based on the traditional and now outlawed tactics of the labor movement: stopping production and workplace-based solidarity. That will not be easy but then again, neither is the alternative. For without a powerful strike, we will continue to have a weak and declining labor movement.

To once again win strikes, the labor movement faces some very difficult choices. Twenty years ago the labor movement was at a crossroads. Labor could expand on the militancy of the Pittston miners led by Rich Trumka, the grassroots activism of Local P9 at Hormel, and the solidarity of the Staley workers in the War Zone of Decatur. Or labor could retreat into the relatively safer strategies of organizing and one day strikes. The labor movement by and large abandoned the path of militancy and today we are seeing the painful results. It is time for the labor movement, especially its reform wing, to admit that simply more of the same cannot revive labor.

For a fuller treatment of these my views please see my article http://www.inthesetimes.com/working/entry/5967/strike_why_mothballing_la... or my book to be published in April 2011 by IG Publishing, The Revival of the Strike and the Future of American Labor.
Joe Burns
Joe.burns2@gmail.com