Behind the Headlines: The Workplace Kills 14 Per Day—One by One 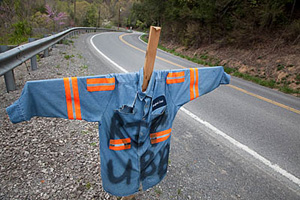 A roadside memorial for the 29 killed at the Upper Big Branch mine in West Virginia. Behind the headlines on the latest workplace disaster is a far quieter but equally disturbing story of daily carnage. Photo: Jim West.

It’s been a very bad couple of months for worker safety: Seven dead in Anacortes, Washington, following the explosion of the Tesoro refinery. Six dead in Middletown, Connecticut, in the Kleen Energy power plant explosion. Twenty-nine dead in West Virginia’s Upper Big Branch mine disaster. And 11 dead in the Gulf of Mexico oil rig collapse (a fact almost completely overlooked in media coverage of the spill’s environmental consequences).

But behind the headlines on the latest disaster is a far quieter but equally disturbing story of daily carnage. In the same week as the human-created disaster in the Massey mine in West Virginia, local media outlets around the country carried dozens of stories with headlines like “Man Killed in Trench Collapse” or “Fall from Roof Fatal.”

The toll of these routine incidents—14 deaths a day from injuries alone—is obscured because most occur one death at a time.

Month after month, year after year, workers die in trench collapses and falls from roofs. OSHA cites the employer, slaps it with a modest fine (a median penalty of only $3,675 per death in 2007), and points out that simple methods exist to prevent such tragic loss of life. Yet some employers continue to ignore the hazards and workers continue to lose their lives due to this criminal neglect.

Like the high-profile workplace disasters, the vast majority of deaths on the job are entirely preventable. The problem is not a technical one of chemical concentrations, safe machinery, and ventilation, but a political one—simply put, our national system for enforcing health and safety regulations in the workplace is broken.

First, it’s a problem of resources: OSHA’s budget for enforcement is pitifully inadequate, a situation that has worsened since deregulation began in the Reagan era. In the late 1970s, OSHA had one inspector per 30,000 covered workers; today it’s one per 60,000.

Second, obstacles to any new workplace safety rules, put in place by deregulation ideologues in Congress, have effectively brought the OSHA regulatory process to a complete standstill. As the Center for Progressive Reform puts it, “In the nearly 40 years since its enactment, the OSHA Act has been exposed as a virtually useless tool for establishing occupational health and safety standards.” In the last 13 years, OSHA has issued exactly one new health standard establishing the maximum safe exposure to a chemical, and that under the duress of a court order.

Third, OSHA’s promise that all workers have the right to speak up about unsafe or unhealthy conditions without retaliation has proven to be a cruel joke to those who have risked their jobs by calling OSHA. The agency’s whistleblower protection program is so ineffective that worker advocates cannot in good conscience advise a non-union worker to file an OSHA complaint if he or she wants to keep the job.

The Massey mine explosion demonstrated clearly that the combination of de-unionization, lack of enforcement of safety regulations, minimal penalties for violations, and lack of whistleblower protections is lethal. As several current and former Massey workers noted, the mine was a time bomb waiting to explode, but in a non-union mine, it was keep your mouth shut or lose your job.

HOW TO FIX IT

The solutions to this sorry state of affairs are not complex:

1) Congress should amend the OSH Act and the Mine Safety and Health (MSH) Act to protect whistleblowers and to require serious monetary and criminal penalties for egregious violators whose willful neglect of safety results in workers’ deaths.

Under current law, even the most egregious case of employer neglect can result in no more than a misdemeanor, punishable by a maximum six months in jail. Civil penalties also lag far behind those for violations of other federal law.

New OSHA chief David Michaels noted in a recent Congressional hearing that when a Delaware refinery worker was killed in a sulfuric acid explosion, OSHA assessed a fine of $175,000, while the same incident resulted in EPA fines of $10 million for violations of the Clean Water Act.

2) Congress should dramatically increase the budget for OSHA enforcement.

3) OSHA should fundamentally rework its system for regulating hazards. It should issue a broad “Health and Safety Program Standard” and cite employers under the “General Duty Clause” for unsafe conditions.

These measures would require employers to develop worksite-specific health and safety programs and allow OSHA to enforce the employer’s duty to provide a safe workplace—without having to navigate the endless bureaucratic obstacles to issuing safety or health standards on a one-by-one basis.

4) Congress should close the loophole in the MSH Act that allows companies like Massey to avoid paying fines by contesting most MSHA citations, effectively shutting down the penalty system. Massey contested 3,601 citations in 2009, creating a logjam that prevents MSHA from collecting on assessed penalties.

5) Congress should enact labor law reform so that workers who want to join a union and speak up about unsafe conditions are able to do so.

But these changes won’t come about because Congress simply decides to do so. Despite much fist-pounding by senators at recent hearings on the mine disaster, they will likely soon forget about worker safety and move on to the next crisis.

A bill introduced in 2009 would go a long way toward strengthening OSHA’s ability to protect workers. The Protecting America’s Workers Act would increase maximum civil and criminal penalties, expand protections for whistleblowers, and extend OSHA protections to public employees, many of whom are now excluded.

Unfortunately, a timid Democratic-controlled Senate Labor Committee appears unwilling to move the bill without Republican support. (Can someone explain to me why it’s not a good idea to force Republicans to cast a vote against worker safety after the recent disasters?)

So perhaps we can expect little from Congress—unless the labor movement and its allies turn up the heat on our representatives. Now—in the wake of a slew of highly publicized and preventable disasters—is the time to demand action, before more workers die.

Tom O’Connor is executive director of the National Council for Occupational Safety and Health, the umbrella organization of 20 state and local COSH groups.