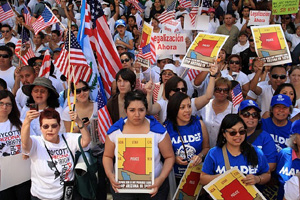 Saturday’s May Day marches and rallies across the country took on new urgency as activists mobilized to oppose Arizona’s sweeping anti-immigrant laws and support a single-payer plan in the states. Photo: Slobodan Dimitrov.

Saturday’s May Day marches and rallies in support of immigration rights across the country took on new urgency as activists mobilized to oppose Arizona’s sweeping new anti-immigrant laws.

“The new law in Arizona requires police officers to detain people and demand proof of their immigration status if the officer has ‘reasonable suspicion’ to believe that the person doesn't have authorization to be in the United States,” said Mary Mendez of Enlace, a network of worker centers and unions organizing immigrant and low-wage workers. “The law puts the entire Latino population of Arizona in risk of arrest.”

The implications for workers could be drastic.

The law “severely affects workers’ rights: any boss that is confronted by complaints by Latino workers—in the form of a protest or demands—can simply call the police and the workers will be arrested based on the guise of ‘reasonable suspicion,’” Mendez said. “The frightening possibilities of the law are clear.”

In Seattle, more than 12,000 people from across the state came to march, responding to the call for
solidarity against Arizona’s legislative attack on immigrants and refugees.

Young and old voices chanted, “Aqui estamos y no nos vamos/ We are here and we are not leaving.” After waves of participants marched four miles in downtown Seattle, they celebrated at Memorial Stadium.

In Los Angeles, organizers expected 100,000 to attend. Media pegged the number at the march and rally between 60,000 and 75,000. Religious, community, and labor leaders addressed the crowd, which was reported to be the largest in the nation.

Larger-than-expected turnouts were reported in other corners of the country: As many as 25,000 gathered in Dallas, 7,000 in Houston, and 3,000 in Austin. More than 70 protests took place nationwide.

This year’s events were some of the largest in support of undocumented workers since the historic 2006 May Day marches, which attracted millions to oppose anti-immigrant federal legislation. The connection between that 2006 bill and the current Arizona law was not lost on many in the crowds on Saturday.

After a week of international outcry, Arizona lawmakers modified the bill with language that guided police not to use “race, color, or national origin” in putting it to use. The new language softened some of the original bill’s mechanisms, switching the basis for a police inquiry into immigration status from a vague “contact” with police to a “lawful stop, detention, or arrest.”

“We know these are merely cosmetic changes,” Mendez said. “We need urgent action. The Arizona law should not be allowed to become a model.”

HEALTH CARE FOR ALL

May Day pressure for a different sort of model in the health care system was on display in Vermont.

More than 1,500 people poured into the streets of Montpelier, the state capital, chanting, “The system, let’s stop it, our health is not for profit.”

The May Day march, called by the Vermont Workers’ Center’s “Healthcare Is a Human Right” Campaign, came just after both houses of Vermont’s legislature passed by wide margins a bill championed by the campaign.

The bill commits the state to design a new health care system based on the principles of universality, equity, transparency, accountability, and participation. It commissions a consultant to design three options, one of which must be a single-payer (that is, Medicare-for-All or Canadian-style) plan.

The marchers came from all over the state and included members of all Vermont’s major unions, along with young people, students, people with disabilities, members of the faith community, retirees, and lots of previously “unorganized” working people.

The march converged on the statehouse, where marchers gathered to celebrate the legislative victory, demand that the Republican governor refrain from vetoing the bill, and hear speeches and skits from leaders of local organizing committees across the state, nurse union leaders, and Senator Bernie Sanders, a long-time advocate for single-payer health care.

David Kreindler, a rank-and-file member of the Vermont State Employees Association and a leader of the Workers’ Center, noted that when the campaign began, few among the “political class” thought it would be possible to take action on health care at the state level during the federal health care reform debate.

Mari Cordes, a member of the Vermont Federation of Nurses and Health Professionals Local 5221/AFT, was one of more than a hundred union nurses from Vermont who travelled to Haiti in the wake of January's earthquake to provide emergency medical relief.

“We could not have succeeded [in Haiti] without the solidarity and strength of my union,” she said. “We succeeded because we worked together, just as you and I work together every day to ensure that each and every one of us never has to worry about whether they can afford to get medical help.”

While the mood was celebratory, Workers' Center organizers are clear that there is still a long struggle ahead, to prevent or override a veto this year and to ensure implementation of a decent plan next year.

“We see ourselves as part of the labor movement,” says James Haslam, director of the Vermont Workers’ Center, “and the success of this campaign demonstrates what can be accomplished when the labor movement takes a principled stand on issues that resonate with working-class and low-income people, provides a way for everyone to be meaningfully involved, and maintains independence from political parties.”

Jonathan Kissam is a rank-and-file member of the United Electrical Workers in Vermont. Star Murray, Chris Kutalik, and Tiffany Ten Eyck contributed to this report.

Related
Los Deliveristas Speak: How Delivery Workers Are Organizing to Take On the Apps »
Don’t Compromise on Farmworker Rights »
Viewpoint: A ‘Union’ That Pushes to Deport People Is the Labor Movement's Opponent »
Work Is the Reason Latinos Are Getting Slammed So Hard by the Pandemic »
The VA’s Fourth Mission and the Pandemic »