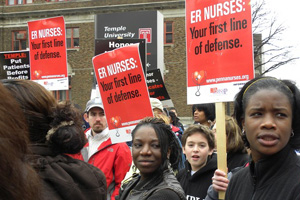 As the strike of 1,500 nurses and professional staff at Temple University Hospital in Philadelphia entered its third week, the heat was on the administration to return to the table. Photo: TempleWatch.

Update, May 5: PASNAP members have ended the strike, winning a settlement that met their major demands. See this blog post for more.

As the strike of 1,000 registered nurses and 500 technical and professional staff at Temple University Hospital in Philadelphia entered its third week, the heat was on the administration to return to the table and bargain in good faith.

The Pennsylvania Association of Staff Nurses and Allied Professionals (PASNAP) has maintained disciplined but lively, loud, and inspired picket lines in front of the facility. A constant flow of Philadelphians answers our call for support with their horns, filling Broad Street with the raucous sounds of struggle.

Make no mistake: This is management’s strike. Temple’s “last, best, and final” offer demands concessions on union rights, benefits and wages, and our constitutional rights—it insists on a gag rule. Six months of negotiations since the contract expired earned us only one change: the $1,000 ratification bonus disappeared.

Inside the hospital, things do not appear to be going quite as management planned. The Emergency Department has been diverting more patients in the last few weeks than it has in the last year.

Every day, physicians and staff not represented by PASNAP relate incidents of labs not drawn or results delivered hours late, agency staff unable to work complex machinery, and problems with computer documentation. Scabs have their own gag clause; they are threatened with discipline up to and including termination for engaging the strikers in any way.

Temple insists on doubling health care premiums for nurses, tripling them for the technical/professional staff, freezing wages for a year, and reducing wage differentials for undesirable shifts and 24-hour on-call rates. Its final offer would give management the right to change or eliminate health plans at any time and to hike premiums annually.

Most disturbingly, the hospital insists there will be no agreement without its “non-disparagement” clause, which states that members “shall not publicly criticize, ridicule or make any statement which disparages or is derogatory of Temple.” The hospital maintains there is never a need to go public to protect patient safety.

PASNAP, however, supports staffing ratio legislation pending in the legislature and anticipates that members and officers may testify at public hearings to give first-hand accounts of unsafe situations, in order to explain the vital need for such legislation.

Temple considers its staffing levels a management prerogative and therefore a non-mandatory item of bargaining—and has refused to negotiate any staffing language.

A year ago, the hospital unilaterally and illegally eliminated the long-standing dependent tuition benefit and promises to keep it out of any future agreement. The Pennsylvania Labor Relations Board ruled in the union’s favor on this issue, but Temple continues to appeal, now fighting not only its employees but also the Labor Board.

Members have reached out to allies and their response has been swift, powerful, and universal. National Nurses United and the nurses associations of California, Massachusetts, Minnesota, and Michigan have all sent members with messages of solidarity to the picket lines and lent material support.

Speakers at a huge rally with the presidents of the Philadelphia Police (FOP Lodge 5) and Firefighters’ unions (IAFF Local 22) recalled the police officers and firefighters cared for in our ER and burn unit. They ended with the chant, “Your strike is our strike!”

Many other unions are sending cases of water and snacks, and groups of members to support the picket lines. The Temple University Student Senate voted to support the union and members of the school’s Student Labor Action Project have been a welcome, vocal presence at many PASNAP events, along with high school students, members of the Philadelphia student union.

On April 9, Faith Day, pastors from all denominations and all parts of the city voiced their support from the picket line.

A day before, PASNAP members filled a weekly session of City Council to capacity while the overflow crowd initiated an impromptu picket line out front. The council will consider a resolution calling on Temple to return to good-faith negotiations. Congressman Bob Brady pledged to hold any stimulus money headed to Temple until there is a satisfactory resolution to the strike.

Patients and their visitors at the hospital are greeted with flyers explaining the issues and giving suggestions on how to help end the strike. Tragically, it is the patients who suffer most. Temple recklessly pledged to maintain all patient services throughout the strike and is employing agency labor at up to $10,000 per week.

A newly published study by the National Bureau of Economic Research found that struck hospitals that continue functioning with scabs put patients at increased risk. Mortality increased by 19.4 percent during strikes, and 30-day readmissions by 6.5 percent, according to the paper, which studied nurses’ strikes in New York between 1984 and 2004.

“We are legally obligated to give the hospital appropriate notice of the date and time of the strike,” said Maureen May, president of the Temple RN local. “Theoretically, the hospital is supposed to use that time to transfer patients out of the facility, to reschedule elective procedures, and defer admissions. Temple chose to charge ahead and bears full responsibility for patient safety.”

PASNAP members will stay strong, united, and outside until Temple presents an offer that protects our patients and our rights. Good-faith bargaining is the hospital’s cheapest and most responsible option.

Marty Harrison is a Temple staff nurse and executive board member at the hospital’s PASNAP local.