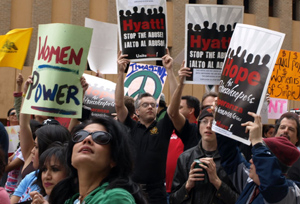 International Women's Day often gets short shrift in the United States, its places of birth, but in San Antonio, women's groups are raising its profile—and a little hell—while bolstering a hotel organizing drive. Photo: Chris Kutalik.

Much like its storied sibling, International Labor Day (May 1), International Women's Day often gets short shrift in the United States, its places of birth.

But for 20 straight years women's groups and allies in San Antonio, Texas, have been raising the profile of Women’s Day—and a little hell—by taking to the streets. The march has grown steadily over the years, and close to 2,000 marched this Saturday, making it the largest and arguably the rowdiest such event in the country.

The varied messages of the annual event reflect the broad coalition of groups that come together to plan it over several months of weekly women-only meetings. Women from the worker-run seamstress collective Fuerza Unida rub shoulders with younger Chicana feminists from the Esperanza Peace and Justice Center and women from a local university's social work association and the Martinez Street Women's Center. Banners bearing the Virgin of Guadeloupe mix with signs showing old-time Latina labor leader Emma Tenayuca and those bearing slogans like “End NAFTA: Stop the Femicide in Juarez” (a reference to the many violent deaths stemming from the drug trade in that border city).

Starting this year in front of downtown San Antonio's massive 1,000-room Grand Hyatt, this wide-ranging group placed the fight for women in the workplace center stage. For over a year now, a tight rank-and-file UNITE HERE-affiliated organizing committee has been plugging away at rallies, worker-community delegations, creative street actions, neighborhood outreach, and member-to-member organizing in an effort to get the hotel to back down from its aggressively anti-union campaign locally—and provide a neutral process for the workers to choose a union.

Many of the committee's stalwarts are women workers in the hotel's housekeeping and laundry departments. And many of them are just plain tired and angry about their grinding workload.

Iola Scott, a Grand Hyatt laundry worker and Katrina survivor, addressed the cheering crowd in front of the hotel: “Sometimes I work the [laundry] chute, pulling many pounds of filthy, contaminated linens, moving them and sorting them. The work is hard and heavy. I have pain when I'm working and I have pain when I'm home...and I have the medicine cabinet to prove it.

“I’m proud of myself and my co-workers, because we are not just victims,” said Scott, referring to the committee's linking its local fight to national efforts around hotel job injuries and lifting standards in the industry. “We are not afraid to fight back,” she said. “We are leaders in a campaign across the country to force companies like Hyatt to stop abusing and hurting women. And we invite all women to join in this struggle, because our fight is a fight for all women.”

Chants of “Hyatt, Hyatt, What do you say? Stop abusing your workers today” echoed back from the towering hotel as the three-block-long march swung out into the wide street in front of it. Hotel workers waved from upstairs windows and cars and buses honked their horns in support as the march moved through downtown to Plaza del Zacate, a historic meeting spot in Milam Park for the city's various protest movements.

Chris Kutalik is a Labor Notes Policy Committee member who is helping organize UNITE HERE's community unionism project in San Antonio. He can be reached at kutalik [at] gmail [dot] com.