Just Say ‘No’ to Drug Tests — Then Bargain 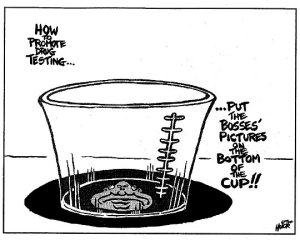 Under the guise of concern for employees’ safety and health, employers demand the right to conduct drug and alcohol testing. Most use it as just another hammer to hold over workers’ heads.

Employers often try to divide the membership on this issue, since the overwhelming majority don’t drink or use drugs on the job. We can turn this around by pointing out, “Why subject the majority to testing if only a few people may have problems?” We then can unite the members around fighting for a no-testing policy. If it looks like we can’t win that, then we make the fight for the best, least harassing policy.

When the company informs you that it intends to start a testing program for all employees, what are the union’s rights?

Can the company implement a change of this nature mid-contract?

No. The employer does not have the right to unilaterally make such a large change in working conditions. But as with all mid-contract bargaining, it is up to the union to demand bargaining.

Does the company then have to bargain over drug testing?

Yes, if the union makes the demand. The National Labor Relations Board ruled in 1987: “drug testing for current employees and job applicants is a mandatory subject of bargaining under Section 8(d)...Established Board policy that a union’s waiver of its bargaining rights must be clear and unmistakable is to be applied to drug testing.”

The NLRB has ruled that just filing a grievance is not the same as demanding bargaining. The union must put it in writing: “Local 946 demands that the employer enter into negotiations over its proposed drug and alcohol testing program, and the employer must immediately stop any drug and alcohol testing of union employees that it may have started.”

Can the union “just say no”?

If we take the position that we’ll simply grieve any unjust discipline under the “just cause” clause, we’ll end up with a policy that is bad for members and will have a weaker position at arbitration over whether a firing was justified.

One tool is our right to demand information from the employer concerning why it wants to implement a testing program. The University of Iowa Labor Center has compiled a list of 125 questions/demands for information that unions can use. Examples:

• Exact information as to the employer’s knowledge of any alleged drug or alcohol use in the workplace.

• The economic impact of testing on the employer.

• Training and knowledge supervisors have or will get to make them experts in spotting drug or alcohol abuse.

• How management will ensure all information is kept confidential, and how the hospital or testing agency will guarantee the same.

• How the employer can prove the tests are accurate. We want to see every scientific study in its entirety on the accuracy of each test.

• If the employer claims drug and alcohol usage affects attendance, productivity, the employer’s image, or employee accidents, then it must reveal all information to back this up, including every study used to back up this claim. This could include all data about every accident that has happened over the course of years.

What kind of D&A policy should be fought for?

• Testing for “just cause” or “reasonable cause” only. These should be defined as slurred speech, inability to walk straight, erratic behavior, or other visual signs that would cause a reasonable person to believe the person was under the influence. No automatic testing because of absence from work, an accident, being rude to a boss, or low production.

If an employee admits to having a problem, then no testing should be necessary and the only discussion should be on whether a rehab program is necessary.

In one case where the employer was insisting on this, UE demanded the right to test the employer and supervisors for immoral acts they might take part in outside of work. The union proposed that all bosses take lie detector tests to see if they were racists. The employer soon agreed that testing would take place only if employees showed evidence of on-the-job impairment.

• The employer must provide transportation to the testing facility and the worker must be paid for time missed from work.

• Use breathalyzer, saliva, or blood tests. There is a difference in what the different tests show. Urine tests should be avoided, as these tests will show use of alcohol or drugs that occurs off the job and for weeks in the past. If urine testing is agreed to, then the levels of alcohol or other drugs present in the body must be set to show only current usage and impairment.

Breathalyzer tests for alcohol will show recent or on-the-job use. Blood testing also shows recent use, as does saliva testing for marijuana use.

• Protect a worker’s right to privacy while being tested. Always point out that the employee is innocent until proven guilty.

• Negotiate the employee’s right to have a second test done by a different agency using the same samples, at the employer’s expense.

• The agency doing the testing must be able to guarantee a safe “chain of custody” for the evidence. This means proof of who was handling the evidence at all times and proof that samples couldn’t get mixed up with other samples. After a sample is given the employee should sign the seal that closes the sample vial.

• Get language that says rehabilitation is primary, not punishment. Employers must recognize alcoholism and drug addiction as illnesses. Workers should be allowed to use employee assistance programs that take place after work.

Only in extreme cases should an employee be made to leave work to attend a rehabilitation clinic. While at the clinic the employee should receive sickness and accident pay. The D&A policy must recognize that these illnesses are hard to cure and therefore termination can come only after a series of failed tests.

Does the Americans with Disabilities Act cover alcoholism or addiction?

Alcoholism is considered a disability only if the employee is actively undergoing treatment for it. In this case an employee should not be fired for being an alcoholic.

This does not mean that the employee can come to work drunk, which could be a danger to other workers. The ADA excludes addiction to illegal drugs from consideration as a disability.

The University of Iowa Labor Center’s excellent Alcohol and Drug Testing manual gives detailed advice on dealing with such programs from start to finish. Iowa law is used, but most of the information applies to any union. Download the manual.

A version of this article appeared in Labor Notes #372, March 2010. Don't miss an issue, subscribe today.
Related
New York City Workers with Disabilities Fight for Inclusion in Pandemic Recovery, Mayoral Race »
Here's How to Join Labor's Anti-Coup Network »
Undergrad Workers Organize Wall-to-Wall at Kenyon College »
New UE Pamphlet Highlights Rank-and-File Control, Calls for Return to 'Them and Us Unionism' »
With a Little Help from My Friends: How Taco Bell Workers and Many More Are Self-Organizing in the Pandemic »