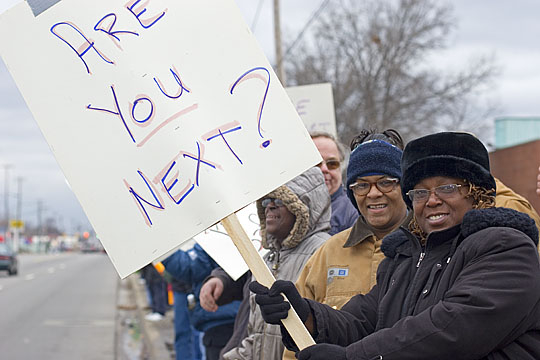 Delphi workers are fighting demands for further concessions pushed by the United Auto Workers, which is trying to split apart the master agreement at the company. The International didn’t anticipate rank-and-file anger, which has halted its concessions locomotive. Photo: Jim West/jimwestphoto.com.

Government-owned GM can’t live without parts supplier Delphi but can’t live with union wages. So the United Auto Workers is doing the dirty work, trying to strong-arm five former Delphi factories to open their contract yet again and break their master agreement.

What the International didn’t anticipate was rank-and-file anger, which has halted its concessions locomotive.

Delphi was once part of GM, but now just five sites are—locations in Indiana, Michigan, and New York were sold back to GM in late 2009 and became known as the “keep sites” because they’re so important.

A memo from officers of Local 686 in Lockport, New York, last month told what GM and the UAW had in mind: “The keep sites will have their own individual agreements which will be plant specific.” The idea was that with separate agreements, each site would be able to bid competitively for work, by making concessions.

The union also promised a wage freeze for production workers and a $3-an-hour hour wage cut for skilled trades. The plan for winning new production included a potential “second tier” of workers.
The International UAW Concession Caucus insinuated that concessions were mandatory. They asserted that “in order to remain competitive, there will be other necessary modifications we must consider and ratify.”

Kim Moody: A Pattern of Retreat: The Decline of Pattern Bargaining

The key word is “ratify.” UAW members do not have to reopen the contract and break the master agreement in order to secure jobs. In fact, breaking the agreement makes individual plants less secure.
The 2007 UAW-Delphi agreement is legally binding until July 2011, including the successor clause that requires that “any sale of an operation as an ongoing business” brings with it the 2007 contract.

The UAW International severely miscalculated the readiness of the rank and file to roll over. The Concession Train collided with an immovable object: rank and file outrage.

When GM canceled a raise due on January 4 for the former Delphi workers, the Con Caucus didn’t object. They accepted it as a done deal. The rank and file demanded a grievance and backed Concession Caucus Vice President Cal Rapson into a corner.

Mackin said union officials warned workers, “You’re bidding against other UAW facilities that are paying their workers $10 an hour.” One worker brought a lock and chain to the meeting. “Go ahead and lock it up,” the member responded. “I don’t need a union for $10 an hour. I’ll work someplace else.”

Now the International is backpedalling. At the union’s Sub-Council meeting in Chicago in late January, Rapson agreed to file a grievance and admitted that the contract ratified in 2007 is legal and binding.

There is no historical precedent for winning job security by breaking a master agreement.

If a company threatened to close a plant because of an organizing drive, the NLRB would file charges. Yet with every new contract the UAW Con Caucus threatens a loss of jobs unless members bow to company demands for more concessions.

One member in Rochester, New York, wrote: “The membership is screaming ‘hell no’ on this deal. The union committee people are fighting amongst themselves very openly and visibly (actual pushing match)....We also know that turning it down may or may not close the plant. At least if it does close we get our severance.”

But the Con Caucus actually told members that if they agreed to reduce their severance packages, they had a better chance of keeping their plants open. They must think we are nuts. Why would workers under threat of closing choose to reduce their severance package? It’s like saying, if you cut your own throat, it will save the firing squad bullets.

GM has been outsourcing parts and inventing aliases for the last 30 years. The five “keep sites” are five sites that they couldn’t replace. They may sell or close additional plants, but reducing severance and wages will only accelerate the process and help pay closing costs.

Workers are better off keeping the contract they have and renegotiating in 2011 when GM will likely be in better financial shape—and when they have the right to flex their bargaining power with a strike.
The drive to break the master agreement at Delphi is a union-busting strategy that will only lead to further attempts to destroy master agreements at Ford, GM, and Chrysler.

Rank and file resistance is spreading. Ford workers voted down an attempt last fall to force the terms of the concessionary bail-out on them.

UAW members who were active in the successful “vote no” campaign at Ford led a meeting January 23 in Detroit at which rank-and-file members took stock of their situation, listened to each other, and supported fellow members in the struggle against concessions and self-destructive company unionism. (Their next gathering will be at the Labor Notes conference April 23-25 in Detroit.)

All UAW members have a vested interest in solidarity. Breaking the master agreement at GM parts plants isn’t the end—it’s the beginning of another round of concessions.

Gregg Shotwell worked at the GM/Delphi plant in Coopersville, Michigan.

A version of this article appeared in Labor Notes #371, February 2010. Don't miss an issue, subscribe today.
Related
Ballots Are Out in UAW Election, with Contrasting Visions of Unionism Up for Leadership »
Auto Workers Turn a Corner for Strike Pay and Democracy »
UAW Delegates Head to Convention and Prepare for First Direct Elections »
Mexican Auto Workers to Choose New Union in Landmark Vote »
Auto Workers Win Direct Democracy in Referendum »